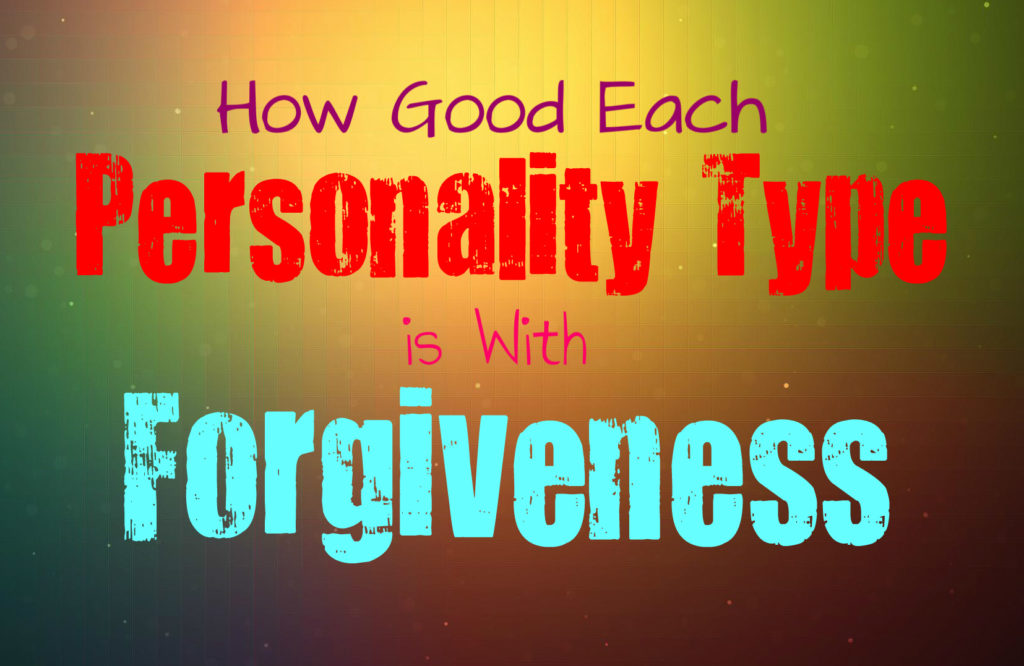 Forgiving is an important part of moving forward and maturing in life. Some people are naturally better at forgiving than others are. Here is how forgiving you are, according to your personality type.

ENFJs will often forgive, but they do not easily forget. They will allow someone to make mistakes, but they will stop trusting them the more this happens. ENFJs have a hard time shutting someone out of their lives, but they will certainly give them less of their trust and consideration. If someone continues to take advantage of the ENFJs kindness, they will be perfectly fine moving on from this person. They will have a hard time not forgiving someone who shows genuine remorse for their mistakes, but that does not mean they will allow that person to make this mistake again.

INFPs are often extremely forgiving individuals, simply because they understand that everyone makes mistakes. INFPs will not likely get into a relationship with someone who lies often, but that doesn’t mean they will hold a grudge against them. They will often forgive people who have slighted them, simply because they do not want to harbor that negative energy inside of them. They prefer to be as understanding as possible, and find ways to move on. INFPs care deeply for people, and because of this they can often be empathetic even towards people who do not deserve it. INFPs might have passive aggressive tendencies, and they may want to be sure someone is truly remorseful before forgetting their mistakes- but they will easily forgive them regardless.

ENFPs will often forgive people, especially when it comes to making smaller mistakes. They understand that no one is perfect, and will be capable of moving on from the error. ENFPs do however have a passive aggressive side to them, and might want the person who hurt them to make amends for their mistakes. They will want that person to prove themselves, and make it very clear that they are sorry and would do anything to ensure that the ENFP forgives them. When they know that someone truly cares, they will forgive them for their mistakes. If someone does something that goes strongly against the ENFPs moral code, then they will have a hard time forgiving this action.

INTJs often prefer to forgive someone, and move on from their mistakes, but that does not mean they forget. They prefer not to make an enemy out of someone, since they understand that can be dangerous. Instead of making enemies, they will forgive someone for their mistake, but will keep in mind that they aren’t entirely trustworthy. INTJs would rather let go of the emotions attached to that person, instead of bottling up their anger and holding onto a grudge. They so no point in remaining angry with someone, and instead will prefer to move on. They are naturally weary of others anyways, and will simply no longer trust someone who crosses them too many times.

ENTJs often struggle with forgiveness, since they prefer that people get things right the first time. They value efficiency, and will see someones mistakes as a weakness most of the time. ENTJs want people around them who are trustworthy and loyal, which often means that they struggle to forgive when people make mistakes. They will become angry with someone who continues to make mistakes, and will often push that person out of their lives. ENTJs can be seen as harsh, but they simply value loyalty and efficiency more than anything else.

INTPs often take a while to process things, which can make them appear less forgiving than they actually are. They are not quick to forgive someones mistake, simply because they need time and space to think things over. If someone has hurt the INTP in some way, it is best to allow them space to process what happened in order to move forward. INTPs can often forgive someone, especially if they can completely understand the reasoning behind their actions. If it is clear that this person is capable of moving forward and refraining from making those same mistakes, the INTP will be able to forgive them.

ENTPs are actually decent at forgiveness, especially when it comes to people they care about. They will often take time to assess the situation in an attempt to understand why someone has wronged them. If the ENTP can understand the persons mistake, they will be capable of forgiving them for it. They simply want to know why the person as made the error, so that they can see if that person is likely to continue this behavior. Once they decide whether this person can be trusted or not, they will be perfectly capable of moving forward with the relationship or friendship.

ISFJs are often very forgiving individuals, especially when it comes to the people they love. If an ISFJ cares for someone deeply they will often give them many different chances to change. They do reach a limit though, and will eventually stop trusting that person. They have a hard time letting go of people though, and might spend many years attempting to help someone become a better person. ISFJs simply give a lot to their loved ones, and dislike feeling like they have given up on them.

ESFJs are often very forgiving people, but they do reach their limit. They will often forgive someone that they love many times before they finally cut them out of their lives. ESFJs want to give someone many chances to change, and this is often because they believe in people. They will continue to try and give someone the opportunity to make amends, but this will only last for so long. When they finally realize that someone is not going to change, they will stop giving them chances and will often no longer trust this person.

ISTJs often can forgive but will struggle to forget. They can understand when someone makes a mistake, and will forgive them the first time. If someone continues to make the same mistakes though, the ISTJ will not stand for this. They won’t allow someone to treat them like a doormat, and simply demand a higher level of respect than that. ISTJs want to have people around them who they can trust, and if someone takes advantage of them then they will easily remove them from their lives. They believe in forgiveness, but not if it turns them into a pushover.

ESTJs often struggle with forgiveness, especially if someone continues to make the same mistakes. They value efficiency and often believe that someone should be able to get things right the first time. If someone cannot seem to get themselves together, and keeps taking advantage of the ESTJ- they will definitely have a hard time forgiving this person. They may struggle with holding a grudge, especially since they will often feel foolish for trusting the wrong person in the first place.

ISTPs are capable of forgiveness, but that doesn’t mean they will continue to trust someone afterwards. ISTPs do not enjoy holding grudges, but might need some time to process things before moving forward. They want to completely understand someones actions, and will often want time and space to think this through. Once the ISTP decides if someone deserves their trust once again, they will be able to forgive and move forward with the relationship or friendship.

ESTPs often forgive their loved ones very easily, but they do not forget easily. They will often keep a mental tally of their loved ones mistakes, even without meaning to. They want to forgive people, especially since they dislike letting go of people they truly care for. This can sometimes cause the ESTP to keep people in their lives who continue to hurt them.

ISFPs often believe in forgiveness, and will give people many chances to fix their mistakes. ISFPs might not completely forget someones wrongdoing, but will be capable of moving forward regardless. They want others to forgive them for their imperfections, and so they give this same exemption in return. ISFPs are kind souls, who are completely understanding when it comes to making mistakes. They do however become hurt if someone continues to wrong them, and might not keep these people in their lives.

ESFPs can sometimes have a hard time forgiving people who have wronged them. If an ESFP truly cares for someone, they might look past a few of their mistakes and completely move on from them. When it comes to people that the ESFP does not trust, they will be quick to anger when that person wrongs them. ESFPs can become easily hurt by people, which can sometimes make forgiveness challenging for them.