Do You Struggle to Feel Like People Get You, According to Your Personality Type 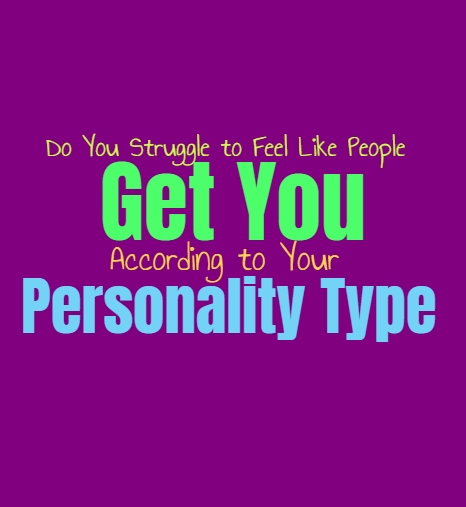 Do You Struggle to Feel Like People Get You, According to Your Personality Type

Sometimes it can be difficult to really feel like people get or understand you, or where you are coming from. For some people this feeling of being understood seems to be even harder to come by. They rarely feel like people just “get” them, often feeling misunderstood and confusing to those around them. Here is how likely you are to struggle with feeling like people get you, based on your personality type.

INFJs rarely feel truly understood by others, struggling to really feel like people get them. Some of this is because they keep a lot to themselves, feeling fear to really be vulnerable. The reason INFJs often keep to themselves is because they have experienced rejection and they want to find ways to prevent this from happening again. They want to be able to connect with others and find people who will truly understand them, but this can be a long process. It can take a while before the INFJ trusts someone enough to open up and take the chance.

ENFJs are often friendly and outgoing people, who know how to make connections. While they do know how to make friends and bonds, they can struggle to feel completely understood. ENFJs want to find someone who understands them on a deeper level, since they can actually be afraid to expose these inner vulnerabilities. Sometimes the fact that ENFJs try hard to be perfect for everyone, makes it so that they don’t feel like people truly get them the way they really want them to.

INFPs do struggle to feel like people truly get or understand them. They often feel like they are different from others and truly misunderstood by most. INFPs do want to find a connection with someone who understands them on a deeper level, but this can sometimes be challenging for them. They try to be open and do their best to share themselves with others, but there are times when they can be hurt by these feelings of rejection. INFPs just want to find people who understand and accept them for who they are, but they can struggle with this at times.

ENFPs do sometimes struggle to feel like most people truly get them, but this doesn’t cause them to give up. They want to find people who appreciate and understand them, caring deeply about these types of connections in their lives. ENFPs try to remain positive even when they have encountered struggles and heartbreak. They have hope that they can find someone who will truly get them, even though they can often feel much different than most people around them.

INTJs are independent people who do keep to themselves most of the time, but they can also struggle to feel like most people really get or understand them. They care about making connections but don’t want to waste their time with people they cannot truly bond with. If the INTJ doesn’t feel understood by someone then they don’t often feel like it is worth building this relationship. They might struggle to feel like most people “get” them, but this doesn’t mean they aren’t willing to patiently wait for the right people to come along.

ENTJs are outgoing people who do their best to connect with others, and don’t like feeling distanced from people they care about. ENTJs do sometimes struggle with feeling like most people truly get them, but they don’t want to waste their time and energy on these types of people. They want to invest themselves in the people who do understand and appreciate them, and so ENTJs try to avoid getting too hung up on people who don’t really get them.

INTPs definitely struggle to feel understood and rarely feel like people truly get them. This is something they often struggle with and for the INTP it becomes worse when they close themselves off to people. INTPs often have many walls built up and this can be the cause of why the feel so misunderstood. It becomes a challenge for them to find the right people who are willing to be patient and wait for the INTP to open up more. They often crave a sense of understanding, but struggle to really open up to this possibility.

ENTPs don’t really like getting hung up on the people who don’t get them, instead they want to wait for those who do. ENTPs are often more nervous about being vulnerable than people realize, but that doesn’t mean they are incapable of taking the risk. They do want to find people who understand and appreciate them, and are willing to continue searching for these connections which will be lasting and meaningful to them.

ISTJs don’t really struggle to feel like people get them, since they move on from those who don’t. They want to invest their energy in people who appreciate them and the work they put into their connections. ISTJs do their best to maintain these lasting relationships, and care about the people who appreciate them for who they are and everything they do. For the ISTJ it isn’t that difficult to find people who get them, since they don’t like to close themselves off from this.

ESTJs don’t feel misunderstood that often, since they find it easier than most to make connections. They are willing to wait for people who will understand and appreciate them for who they are. For the ESTJ it is important to find people they can connect with and so they don’t like closing themselves off to this. They don’t find it difficult to find people who truly get them, since they are often searching for this actively.

ISFJs care about connecting with people and so they don’t find it challenging to find lasting relationships. ISFJs do often feel like the people they have close to them understand and get them, especially the people who show appreciation for what they do. ISFJs are very capable of finding people who get them, since they don’t close themselves off to this. ISFJs don’t really feel like they are so different from everyone else, and care about being more down to earth.

ISTPs don’t really care to complain about feeling misunderstood, but this doesn’t happen when they really care to avoid it. When they want to connect with someone they are charming and capable of getting their point across. ISTPs don’t need to feel misunderstood to feel special, instead they just go about being themselves and allow things to happen naturally.

ESTPs like to live in the present and just try to let things come at them as they go. They care about making connections with people and want to be able to find people who understand them. While they might not feel easily understood, they do often continue to search for the right people they can open up to and feel like these people get them and who they are.

ISFPs might struggle to feel like people get them, but when they find someone who does they hold onto this. ISFPs don’t care about having everyone they meet understand them, they just need one person who is truly close to them. They search for this type of bond and want to make this connection something which lasts and remains close to them.

ESFPs don’t struggle to feel like people get them most of the time, since they are open and outgoing people. Their ability to connect with just about everyone helps the ESFP to feel like they can find people who understand and appreciate them. They don’t like closing themselves off from love and friendships, and this can often be what helps them to find the right people who do actually get them and appreciate the ESFP for who they are.