Here’s How Lenient You Can Be, Based on Your Personality Type 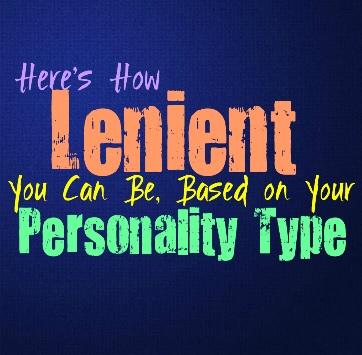 Here’s How Lenient You Can Be, Based on Your Personality Type

While some people are very strict others can be somewhat lenient and forgiving. Here is how lenient you can be, based on your personality type.

INFJs can often be lenient with their loved ones, and might be overly forgiving. They see others making mistakes and they struggle to come down hard on them. The INFJ wants to be supportive of the people close to them, often because they understand how painful it is when someone is harsh or strict. When they see someone struggling they don’t want to make things worse for them, so this is why the INFJ can often be rather lenient with the ones they love. They can be strict with themselves though, constantly putting more pressure on themselves than they truly should.

ENFJs can be very lenient people, especially towards people they care for. They don’t like being harsh or coming down on others and want to make things easier for them. ENFJs don’t want to upset others, instead they want to try and make them happy. Because of this desire to please everyone the ENFJ often struggles to really come down hard on anyone. Most of the time they are forgiving and lenient, and like to go easy on people. They do have certain boundaries though and when those are crossed the ENFJ can be harsh and intense.

INFPs can definitely be lenient at times, especially when they see that someone had good intentions. They are forgiving with certain things, yet can be rather harsh with others. INFPs have strong inner morals which often guide them in making decisions, as well as how they respond to others. If someone’s behavior clearly shows a lack of consideration and seems immoral to the INFP, they will definitely not be lenient towards them. When someone is simply struggling in their lives and making mistakes, in this case the INFP will be more than forgiving.

ENFPs can be lenient depending on the situation, but they can also be a bit harsh. They make decisions based on their own inner morals, and always strive to do what they feel is right. This can make the ENFP frustrated with people who appear immoral or strongly oppose their own views. In these situations the ENFP might see someone’s actions as cruel and selfish, and they will not be lenient with them. When someone is simply struggling and making mistakes in life, the ENFP is more than willing to forgive and be lenient with this type of behavior.

INTJs definitely aren’t lenient people, and are surprisingly harder on themselves than anyone else. They have high expectations of others, especially the ones they care for deeply. INTJs don’t like seeing people fall behind and want to push them to do their absolute best. INTJs don’t like simply sitting back and letting people be weak and give up. They might seem like they are a bit harsh, but the INTJ Is much harder on themselves than they are anyone else.

ENTJs don’t like being overly lenient on others, simply because they believe in always doing their best. They try to push their loved ones so that they can be the best versions of themselves. For the ENTJ this is their way of being helpful and supportive, since they value hard work and efficiency. They can be forgiving as long as others are willing to work hard to correct their mistakes. ENTJs aren’t lenient though, and are actually even harder on themselves.

INTPs can definitely be lenient with certain things, although they do value precision. They understand that people are bound to make mistakes and are always willing to let them learn at their own pace. INTPs aren’t really seen as lenient people though, since they aren’t all that connected to their emotions. They don’t like to be harsh though and try to be patient where they can. When someone is feeling overwhelmed the INTP wants to give them space and doesn’t like coming down hard on them.

ENTPs aren’t really seen as lenient people, but they definitely can be at times. They are laidback individuals who don’t like to take everything too seriously in life. ENTPs do value precision but at the same time they appreciate people who are willing to make mistakes and learn from them. They can be lenient when it comes to mistakes as long as they see that the individual is willing to take risks in order to learn and be open-minded. ENTPs are actually harder on themselves than anyone else, and put pressure on themselves to grow and learn.

ISTJs aren’t really lenient people, since they value a strong work ethic. They believe in doing their best to be efficient and always strive to get the job done. While ISTJs can sometimes be hard on others, they are even harder on themselves. They don’t like slacking off and become annoyed with people who just can’t seem to get things done properly. Laziness is something that often frustrates the ISTJ more than anything.

ESTJs aren’t really lenient people, instead they believe in always working hard. They value efficiency and become frustrated with people who can’t seem to measure up. ESTJs don’t do this to be harsh, they simply don’t like when someone is lazy and can’t seem to get things done properly. ESTJs care about their loved ones and try to be forgiving when they can, they simply want them to do their best in life.

ISFJs are definitely lenient people, especially with the ones they love. They don’t like upsetting others and can definitely be people pleasers. For the ISFJ making others happy and creating harmony in their environment is the most important thing. They don’t want to do anything that will jeopardize the peace in their surroundings, so the ISFJ will definitely be forgiving when someone makes a mistake.

ESFJs can definitely be lenient people, especially with their loved ones. They don’t like upsetting others and can definitely be people pleasers. Instead of being harsh the ESFJ often tries to find a solution and will step in to make sure things get take care of properly. There are times when the ESFJ can reach the end of their rope, but most of the time they are very lenient and forgiving.

ISTPs aren’t really harsh people and can definitely be lenient when it comes to certain things. They don’t want to constantly judge others for their mistakes and don’t take responsibility for the actions of others. ISTPs understand people cannot be perfect, so they can be lenient with some things. There are times when they can be harsh though, but this is often when someone invades their own personal space or lives without having respect for their boundaries.

ESTPs can be both harsh and lenient, depending on their mood. When someone crosses certain lines that bother them, they can be intense and come down rather hard on them. Most of the time though the ESTP wants to give people space and room to make mistakes. They simply don’t like it when they feel like someone is making the same mistakes over and over again, without actually learning from those errors.

ISFPs can definitely be lenient, especially when it comes to the ones they love. They have a hard time being upset with the people they care for most. ISFPs understand that people make mistakes, and they expect this same forgiveness when they make mistakes themselves. ISFPs do become upset with people who cross certain boundaries or go against their strong inner morals, and in these situations they can be a bit harsh.

ESFPs are definitely lenient people, especially when it comes to their loved ones. They can be extremely forgiving and try to let things go. ESFPs often leave the past behind them, and believe in living in the present. They don’t like letting negativity take over, instead they want to soak up the joys in the world around them. ESFPs are definitely lenient and forgiving people, who try not to hold onto negative emotions for too long.