The Levels of Ambition for Each Myers Briggs Type 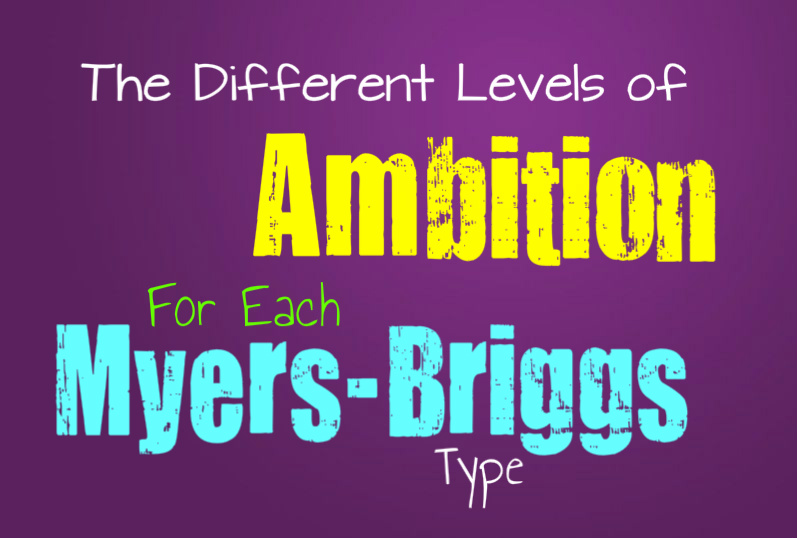 The Levels of Ambition for Each Myers Briggs Type

Ambition is a tricky thing- something that can be seen as both positive and negative. Each Myers-Briggs type has their own set of personal goals and desires. Here is how ambitious each type is likely to be.

INFJs do not suffer from a shallow type of ambition, and often set goals that are much more admirable. They do however, have this innate desire to make a difference in the world around them. They know in their hearts that they are meant to do something and make some kind of position change, they just need time to figure out exactly what this is. Searching for this can sometimes become a frustrating journey for INFJs, especially if they feel like they are fumbling in their lives. They can be seen as perfectionists, because they desire to do things right the first time. They are often hard on themselves, and simply want to be doing the best that they can.

ENFJs are often extremely driven and ambition individuals. They put a lot of pressure on themselves to be successful, especially since they desire to make their loved ones happy. ENFJs desire to be successful in their lives, and this something they usually accomplish. They are very hardworking and forward moving individuals, who rarely take time to sit still. They can often see the path before them, and will strive to get to their goals as fast as they can. ENFJs are often eager to accomplish their personal goals, but will also take on even more tasks in order to please their loved ones. They can usually become very successful business owners, simply because they know how to get things done.

INFPs are dreamers, which means they often spend long periods of time constructing new goals and desires. In their hearts, INFPs are ambitious people- with big goals. Their ambition does not come from a cut-throat place, but rather a place of beautiful dreams. They might want to travel and see the world, or even open up some sort of shelter for animals. Of course, these are examples- but INFPs often dream of making a difference in the world around them. They might struggle with actually taking those next steps towards their goals, which can be rather frustrating for them at times.

ENFPs are often ambitious, but only with a desire to complete their own internal goals. They often do not want to accomplish worldly things, or tasks that other people pressure them to achieve. ENFPs have their own goals and desires, and are often itching to push towards them. They do want to be successful, but by their own definition and on their own time frame. They dislike when other people try to push them in a certain direction, and will often fight against that very intensely. ENFPs simply want to be able to figure out what they truly want, and then go after it. That doesn’t mean they won’t allow someone to assist them in their goals, especially if that person is a romantic interest who shares the same desires.

INTJs are extremely ambitious individuals, who strive to accomplish their goals. They are often very skilled at seeing the next steps that need to be taken in order to get things done. INTJs are driven people, with a strong desire to push themselves. They often set these goals themselves- they come from an internal place. INTJs do want people to notice their hard work and their intelligence, but it is not something they need in order to move forward. Oftentimes, INTJs are driven even further by people doubting their abilities. They are excellent at proving others wrong, especially since they are rarely stopped when they have a goal in mind.

ENTJs are extremely ambitious individuals, and this comes on many different levels. They often want to accomplish their rather hefty goals, and might even want to help other to do the same. ENTJs are good at seeing what needs to be done in order to move forward, which makes them excellent strategic planners. They will push themselves to get things done, and will usually take to helping their loved ones as well. ENTJs show that they care, by helping the people closest to them get their lives in order. When they care for someone they will take notice of the things they want, and they will work to help them accomplish these things.

INTPs ambition usually comes in waves, and will fade out from time to time. They are excellent at concocting plans in order to reach their goals, but will often overthink these steps. INTPs are truly intelligent individuals, who are great at problem solving. The thing that holds them back sometimes, is that they will think about their goals, and analyze them- this can lead to them wondering if this is truly something they want to accomplish. Instead of just jumping headfirst towards a goal, the INTP will consider all of the variables. They will even consider what happens once they accomplish this goals- is it truly something they want? It can take the INTP time to figure out what they truly want, but with the right motivation they are pretty much unstoppable.

ENTPs have their own unique type of ambition- which comes very much from a desire to explore. ENTPs want to be able to soak up new possibilities, and hate being held back by anything. They will often jump headfirst into something new, even if it is something that would terrify most people. Whether this be moving across the world, or simply taking on an exciting new hobby- ENTPs enjoy taking chances. They are often ambitious, but this is in a rather unique way. They don’t always want to accomplish the goals that others set out for them- and would much rather find their own way in life. People can sometimes become concerned by the ENTPs behavior, but they will find their own way- and it will often be successful and much more impressive than people expect.

ISTJs are often ambitious individuals, with an innate desire to be successful. They want others to see them as hardworking, because they sincerely are. They often push themselves to succeed, in order to make their loved ones happy. ISTJs want to ensure that the people they love are completely cared for and satisfied. Their desire to accomplish their goals, often comes from practical ideas. ISTJs know that in order to enjoy life, you need to work hard and become successful enough to do so.

ESTJs are often extremely ambitious individuals- who push themselves beyond reason, in order to get things done. Their drive can sometimes be intimidating by others, especially since they push those around them as well. They simply want to see their loved ones become successful and obtain their desires, so they will often do what they can to make this happen. ESTJs are intense people, and are often unstoppable when it comes to reaching their goals in life.

ISFJs are often not viewed as ambitious people- but they simply have their own type of ambitions. They are often driven by their desire to be seen as hardworking, and even successful. ISFJs want their loved ones to be proud of them, and they often are driven by this desire. They also want to work hard in order to make their loved ones happy, which causes them to have positive goals. They do however, enjoy staying where things are a bit safer, so they certainly won’t do anything that is seen as cut-throat in order to accomplish their goals or climb the corporate ladder.

ESFJs are often ambitious individuals- and will work very hard to get things done. They are organized and driven people- especially when it comes to making their loved ones happy. If they feel like someone they care about is in need, they will do whatever it takes to care for them. In many cases, their desire to be successful, comes from a need to make their loved ones happy. ESFJs are hardworking people, and are not afraid of getting their hands dirty in order to get things done.

ISFPs are not the most ambitious individuals, simply because they have their own desires that many other people don’t fully understand. They don’t often have career ambition, especially if they are forced into a job that they dislike. ISFPs simply want their own space, in order to find the things that make them happy. ISFPs enjoy soaking up the world around them- and truly wouldn’t want to do something that would harm another person. They might dislike the idea of ambition, especially if they feel like it could be harmful to another soul.

ESFPs are often fun-loving people, but they do have an ambitious side to them. They might not be the most organized folks, especially when it comes to working towards certain goals. But once an ESFP realizes a dream of their own, they will be excellent at pushing themselves towards what they truly want. They aren’t afraid to take chances, which often makes them great at getting things done. ESFPs might be the entertainers of the personality world- but they are also skilled at pushing themselves to obtain something that they truly want.

ISTPs are often seen as very laid back individuals- but they do have ambition of their own. People might not always take notice of the ISTPs ambitious side, simply because they do not openly express this to others. They will often only share their deepest desires with someone extremely special to them. ISTPs simply want to work towards their goals, without having people give their opinions on it. They work towards their personal desires, and the things that they value.

ESTPs are extremely ambitious individuals, who push themselves to get things done. They want to be successful in every aspect of their lives- career, relationships and everything that comes along with it. They want people to be proud of them and to take notice of how hard they work. ESTPs are not above doing whatever it takes in order to get what they want. They push themselves rather hard in order to get what they want in life, but they also know how to have fun.