INFP Broken Trust: Dealing with Trust Issues as an INFP 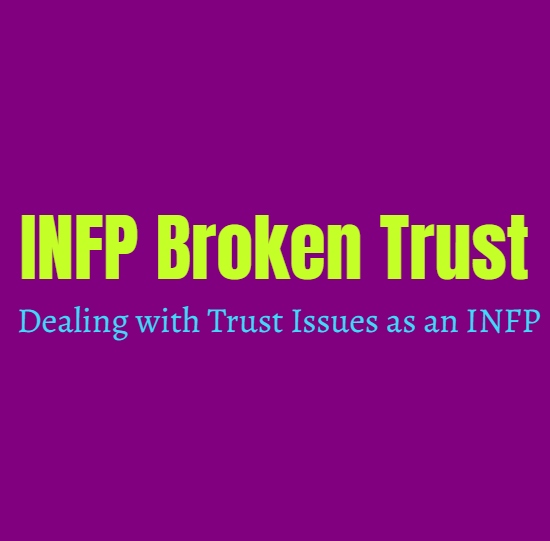 INFP Broken Trust: Dealing with Trust Issues as an INFP

INFPs aren’t necessarily prone to trust issues, unless they have experienced a lot of rejection in the past. For them this can be tied to their own experiences, and if they have endured too many betrayals to really feel comfortable trusting others. INFPs do take a while to fully open up to people and share everything with them, but that doesn’t mean they don’t trust people. INFPs can actually be somewhat gullible at times, since they can see the good in people beyond what their flaws are. INFPs might be able to see someone’s potential rather than seeing just how capable they are of betraying someone’s trust or hurting others. INFPs try their best to be open and honest, and can actually have a tendency to wear their heart on their sleeve.

The INFP who has trust issues has likely developed them over years of rejection and heartbreak. While they thrive on possibilities, getting hurt can cause them to become stuck in the past and those negative experiences. The INFP might have felt rejected by people they relied on and put their trust in, and this hurts them deeply. They feel things on such a deep and personal level, which is why betrayal can be so difficult for them to process. They have big hearts and really care about people and connections, which is why feeling their trust betrayed can be so hard for them to process. INFPs can become truly heartbroken by someone they love and trust, but they do put themselves into these situations because they want to feel close to people. They don’t like feeling as if they have to hide their heart or their feelings, and feel somewhat miserable when they have to bottle things up. For the INFP who has been hurt a lot and feels like showing their vulnerabilities is only going to be received by ridicule, they can become more closed off than normal.

For the INFP having trust issues isn’t something which comes as naturally to them, and is likely to have developed because of their past. INFPs are open people who want to be free to share themselves with those around them, especially when they feel something deep for that person. They want to be open and honest about who they are, and not feel like they need to hide or protect themselves. INFPs can see the good in others, which is what can cause them to get hurt in the first place but this is part of who they are. They love with all their hearts and need to be able to share this love with other people in an unapologetic way.

When the trust has broken for the INFP this can be a difficult thing to really mend and move forward from. They put so much into the people they love and they can become hurt easily because of this. They don’t want to feel like their loved ones don’t appreciate them or respect them enough to be loyal to their trust and needs. INFPs can handle small mistakes and are not likely to hold onto them enough to feel as if the trust is broken, but this is rather situational for them. They have their own set of internal morals and things which they believe are right or wrong. When certain lines have been crossed it can be hard for the INFP to really forgive or move on, as they do give plenty of chances to make things right. When the trust has truly been damaged it can take a long time for the INFP to ever feel like they can rely on this person again. They have certain things which would go beyond forgiveness for the INFP, although they try not to be this way with all betrayals. If the INFP does really care about this person and feel as if they genuinely want to change and make amends, then over time it is possible for them to forgive that person but it can take a while.

For the INFP who is experiencing trust issues, the most important thing is communication. They need to assess their own feelings and what constitutes betrayal for them. Taking the time to figure out what rules cannot be broken, can help the INFP to lay down these ground rules to someone new. Being able to share those feelings and fears with someone can help the INFP feel more prepared for new connections and relationships. Having people they can vent to and express their needs to, is truly important for the INFP. The more they start to figure out which things they can and cannot forgive, the easier it becomes to be clear and concise with the people they let into their hearts. INFPs can also benefit from avoiding people who continue to take advantage of their trust and giving nature, although this can be difficult for them at times. They are loving and giving people, which is a beautiful part of who they are. While this can cause them to appear fragile at times, it is also what makes the INFP incredibly strong.a