Here’s How Mysterious You Are, According to Your Personality Type 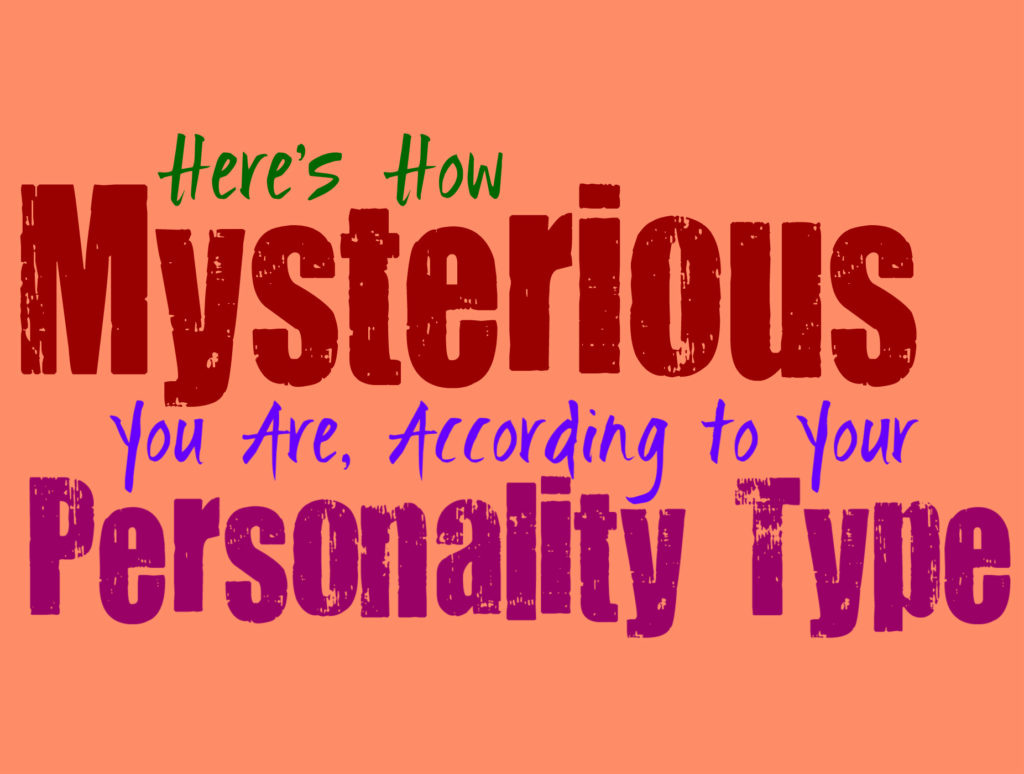 Here’s How Mysterious You Are, According to Your Personality Type

While some people are open books, others have a strong sense of mystery to their personalities. Here is how mysterious each personality type is to others.

INFJs do have a certain sense of mystery to their personalities and demeanor. People often have a hard time understanding the INFJ, since they keep much of themselves inside. They don’t want to be an open book to most people, and prefer to only let the special ones in completely. INFJs are often described as having many layers to their personality, which peal back slowly as they begin to trust someone. This takes a very long time, and most people don’t get through very deep. This is why INFJs can appear rather mysterious to most people, since they are not easy to understand or get to know. For the people who know and love the INFJ, they are not a mystery to figure out but rather an incredible presence in their lives.

ENFJs are outgoing and enthusiastic people, which often makes them appear less mysterious. They are friendly and enjoy doing what they can to help everyone. ENFJs have a knack for making people think they are an open book, when it truth they do hide things from people. ENFJs don’t expose all of their secrets to strangers, and save the really personal information for their loved ones. This causes the ENFJ to appear much less mysterious than they actually are. Most of the time the ENFJ is okay with this, because they want people to trust and rely on them.

INFPs are generally not seen as mysterious people, because they are sincere and honest. They don’t believe in holding back who they are, and constantly strive to be open with others. INFPs may not expose themselves to strangers though, but this just makes them appear more like they are shy than anything else. When they with their loved ones though, the INFP comes out of their shell and expresses their goofy and fun side. They may not always be the most mysterious people, but they are imaginative, playful and extremely trustworthy companions.

ENFPs are outgoing and friendly people, who enjoy coming out of their comfort zones. The fact that ENFPs are so open and sincere, makes them appear much less mysterious. They have many sides to their personalities though, and to some people they are capable of maintaining a sense of mystery. The ENFP is much more likely to appear mysterious when they are trying to catch the eye of a romantic interest. When they want someone to be intrigued by them, they know how to create that feeling of mystery and butterflies. When the ENFP doesn’t appear mysterious, it is simply because that person has gotten to know them on a deeper level and realizes just how honest they truly are.

INTJs often do have a mysterious demeanor, which is often very appealing to people. They are independent and private people, who like to keep most things to themselves. This desire to keep to themselves, combined with their naturally enigmatic personalities, causes the INTJ to appear very mysterious. In truth they enjoy having it this way, and are often very aware of how they come off to others. They can seem a bit aloof and disinterested to most people, since the INTJ has so many others things on their mind. They are much more interested in being inside of their own rich inner minds, making them create a strong sense of mystery to others.

ENTJs are motivated and hardworking people, who value efficiency. They don’t always care to express a sense of mystery, since they are far too focused on getting things done properly. They often appear stern and intense to others, and might even be a bit intimidating. ENTJs actually do keep a lot of themselves private from most people, but this might not be obvious to them. They have such strong and powerful personalities that people really only notice that side to them. When ENTJs are around people they like, they can be outgoing and extremely fun. So even though they don’t appear mysterious, ENTJs actually have many sides to them.

INTPs are definitely mysterious people, who keep most things to themselves. Their sense of privacy makes it hard for people to read and understand them fully. INTPs like to spend a lot of their time inside of their own inner minds, since they have so many thoughts and ideas rumbling around inside of there. The fact that INTPs are in their heads so much, makes them appear a bit aloof and detached from people. Their private and internal behavior makes the INTP appear extremely mysterious and even a bit intense. They also do not express their emotions openly, which only aids to their sense of mystery.

ENTPs are outgoing and enthusiastic people, which larger than life personalities. Their sense of eagerness to try new things, causes the ENTP to be rather unpredictable. They do enjoy expressing their ideas to people, but at the same time they keep parts of themselves bottled up. Just when people seem to have the ENTP figured out, they change course and make themselves even harder to understand. They do have a sense of mystery to their personalities, making people even more enticed by the ENTPs presence.

ISTJs are hardworking and focused people, who enjoy keeping most of their lives private from others. Although the ISTJ enjoys privacy, they are also rather honest with others. They don’t like to be deceitful, and because of this they often appear much less mysterious than they actually are. Their sincere and dedicated personalities cause the ISTJ to seem very transparent. In truth they keep a lot of themselves hidden, but don’t mind if people believe that they are being more open than they actually are. They simply enjoy keeping their feelings to themselves, and feel uneasy sharing too many things.

ESTJs are very upfront and somewhat transparent people, making them much less mysterious. They enjoy being honest about who they are and what they want from life. They are hardworking and focused people, who work hard to get things done. ESTJs main goal in life is to be successful and as efficient as possible, which makes them rather easy to understand. ESTJs don’t mind lacking mystery, and would much prefer to be respected and admired. They want people to appreciate them for who they are, and for what they accomplish in life.

ISFJs are generally not mysterious people, since their main motivations are pretty clear to others. They are hardworking people, who strive to take care of their loved ones. ISFJs are nurturing people, who truly care for their loved ones deeply. They don’t mind lacking mystery, and prefer to be upfront and kind people. The ISFJs simply want to make others happy, and hates seeing people in pain. While they might not be the most mysterious people, they are dependable and warm-hearted.

ESFJs are compassionate and loving people, who strive to take care of their loved ones. They may not appear extremely mysterious to others, since they are both outgoing and honest. ESFJs do keep a lot of themselves private though, especially when it comes to their feelings and desires. They simply don’t want to expose all of their thoughts and feelings, but they also don’t want to appear like they are withholding. ESFJs often divulge just enough information, to make themselves appear extremely open to others, when in fact they are more private than people realize.

ISTPs are definitely mysterious people, especially with those they aren’t close to. People are often drawn to the mysterious and aloof nature of the ISTP personality. They enjoy that cool and calm demeanor, and cannot help but become intrigued by them. ISTPs seem aloof and distant to most people, since they are often so caught up inside of their own inner minds. ISTPs are private and independent, and enjoy being able to have a sense of freedom in their lives. To their loved ones the ISTP is often much less mysterious, since they are comfortable with those people.

ESTPs do have a feel of mystery to their personalities, and they enjoy having it that way. They want people to be intrigued by them, and often like holding parts of themselves back. They are both charismatic and interesting people, who can appear a bit aloof and distracted at times. The fact that ESTPs don’t always express their desires openly, makes them even more mysterious to others. For the people who are close to the ESTP though, they are quite the opposite of mysterious.

ISFPs are private and introverted people, who like to keep to themselves most of the time. They do give off a sense of mystery for the people who do not know or understand them. When the ISFP feels comfortable with someone they are quite the opposite of mysterious. They enjoy opening up to the ones they love, and are very upfront and honest individuals. When the ISFP trusts someone, they actually have a hard time keeping their feelings and desires to themselves.

ESFPs are very outgoing and open people, which makes them appear much less mysterious. They are the types of people who will often share their life story with completely strangers in the grocery store. They just enjoy being social, and feel comfortable opening up to people. ESFPs are honest and upfront individuals, and so no reason to keep themselves private. They love being able to connect with people, and enjoy meeting new friends to learn about.