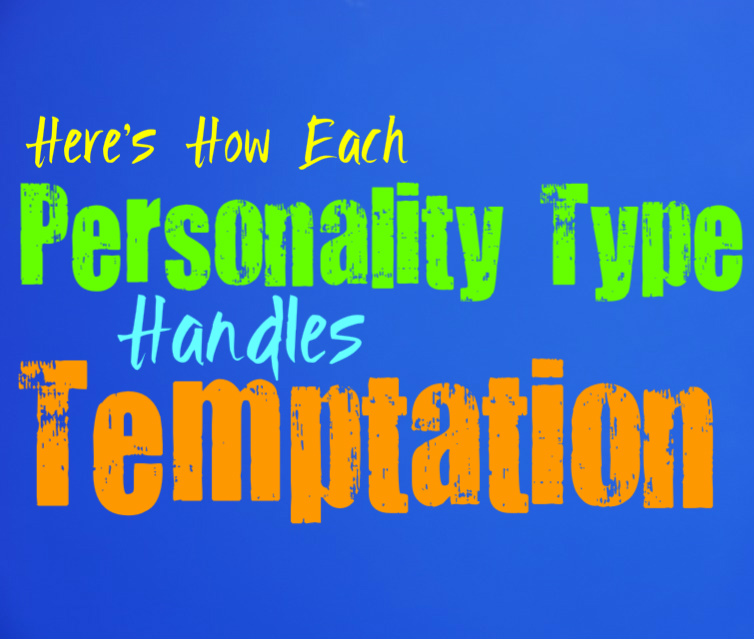 While some people have a natural strength against temptation, others struggle to overcome it. Here is how each personality type reacts in the face of temptation.

INFJs are very introverted people, who spend a lot of their time inside of their own minds. This causes them to find ways to easily block out certain temptations in their lives. They can often dive into their own rich imaginations, as a means of distracting them from whatever is tempting them. Just like anyone INFJs do face struggles when it comes to certain temptations, but they do have very strong wills. They are moral people, who don’t ever want to do something that would affect that or harm another person. There are times when INFJs going into their inferior functions, when they are under extreme stress. When this happens the INFJ is more vulnerable to falling into temptation than any other time.

ENFJs are strong-willed people, who focus strongly on caring for the needs of others. They don’t want to do anything that will harm someone they love, so they try hard to avoid this. They are constantly trying to tend to other people’s needs, and often have a lot on their plate all at once. This can often be a useful distraction from temptation for the ENFJ, and helps them remain focused on their responsibilities. In most cases the ENFJ wants to continue on their planned path and does not want to allow negative or harmful things to get in their way. When the ENFJ is under extreme stress, they can be more prone to falling into temptations. This is because their weaker functions are coming into play, which sort of removes their inhibitions.

INFPs are extremely moral people, who believe in following their hearts and doing what is right. They struggle with temptation but they believe it is important to fight against it. They don’t want to do something that compromises who they are or what they believe in. INFPs value being strong and not falling into negative temptations, especially if they can harm someone else. Like anyone they have times where they struggle, but the INFP will try to distract themselves, by spending more time inside of their own imaginations. The INFP has such a rich inner mind that they can sometimes imagine themselves doing something, and have that be just as satisfying as actually following through with it.

ENFPS enjoy being able to explore new possibilities, and hate feeling stagnant for too long. This desire to always explore newness, can sometimes cause them to fall into temptations. ENFPs are moral people, who don’t want to do anything that they deem wrong. This can be a constant internal battle for the ENFP, since they strive to be good people, but can sometimes make mistakes for the sake of exploration. They just enjoy being able to grow and learn about new things, without feeling held back by anything. ENFPs will certainly fight against temptations when it comes to the people they love, since they value them and do not want to hurt them in any way.

INTJs are logical people, who actually are capable of showing a great deal of restraint. They are focused on learning and understanding information, and rarely have time for reckless behavior. INTJs don’t want to be seen as irresponsible people, and value being moral and doing the smart thing. INTJs don’t want to make too many mistakes in life, and want to think through things before stepping into anything new. They want to be educated in everything they do, and value efficiency. INTJs do have times in their lives when they are under extreme stress, where they can become a bit reckless. During those times the INTJ might have a hard time avoiding temptation.

ENTJs are hardworking and efficient people who believe in doing their best at everything. They are constantly trying to learn and grow as people. They don’t like falling into temptation, since they believe in having control of their own choices. ENTJs do not want to let emotions take control of them, and prefer to remain stable and responsible. When the ENTJ falls into temptation, it is simply because they want to do so. There are times when the ENTJ is under intense stress where certain things can temp them to become more reckless. Normally the ENTJ is sturdy and strong-willed and is more than capable f denying temptations that they deem wrong.

INTPs are introspective and internally focused people, who prefer to spend much of their time inside of their own inner minds. Their thoughts are filled with such rich imagination and creativity, which makes it a very interesting place for the INTP to be. INTPs are normally capable of denying temptations, and have a knack for pushing through things. They prefer to remain in control of their choices and emotions. This desire to constantly be in control can cause the INTP to deny their own feelings for a long time. If they do bottle these feelings up for too long they can sometimes have a way of showing themselves in negative ways. When this happens the INTP will have a harder time denying temptation.

ENTPs are adventurous people who enjoy being able to explore new possibilities. They hate being stuck in one place and enjoy seeking out change. This desire to always try something new in order to grow, can cause the ENTP to struggle with temptations. They become so curious that they are more inclined to try the tempting thing, just to see where it leads them. ENTPs dislike stagnancy, and prefer to shake things up in order to learn more about themselves and the world around them. If it is something extremely important the ENTP can fight against their temptation, especially if it might harms someone they care for.

ISTJs are very self-controlled people, who work hard to avoid temptation. They believe in following their inner morals, and strive to do the right thing. ISTJs do not like the idea of letting their emotions control them, and want to have a strong control over their own actions. The ISTJ likely finds other things to keep them distracted from temptation, and has a strong reserve. They don’t want to be seen as irresponsible and rarely find it difficult to overcome temptations. They simply aren’t the type of people to break away from their traditions, and will always strive to do the right thing.

ESTJs are actually very controlled people, who avoid letting their emotions get the better of them. They believe in working hard and want to do what is best for their loved ones. ESTJs provide for the people close to them and always try to make their lives better. The ESTJ values efficiency and getting things done to the best of their ability. They don’t believe in breaking out of these traditions that they know and appreciate. When it comes to temptation ESTJs have an incredibly strong reserve, and a natural ability to ignore those tempting things. They look towards the future and believe in doing what is best in the long term.

ISFJs are hardworking and considerate people, who have rather strong internal wills. People may not realize how strong the ISFJ is, because they are tender hearted people. They care deeply for their loved ones and strive to ensure their happiness. They don’t want to do anything that will hurt someone else, so the ISFJ likely finds ways to overcome temptation. They rarely struggle when they are tempted, and will look towards more practical projects. ISFJs don’t believe in hurting others, and often being tempted by irresponsible things will cause that to happen.

ESFJs main focus is to tend to the needs and emotions of their loved ones. They want to make other people happy, which means they often work to avoid temptation in their lives. They care deeply for others, and will feel very guilty if they hurt someone else. ESFJs do have a lot of self-control, especially when they know they are doing the right thing. They try not to let their emotions get the better of them, and will overcome most serious temptations. There are moments when the ESFJ cannot contain their emotions, and might follow their heart straight into temptation. They try to find ways around this, but it does happen sometimes when they are beckoned by someone they love.

ISTPs are intelligent and logical people, who enjoy analyzing and learning new information. Even though ISTPs care about doing the smart thing, they also can be reckless sometimes. They enjoy taking chances and love experiencing adventure. This desire to shake things up sometimes causes the ISTP to fall into temptation. In truth they aren’t upset or ashamed of this, and actually enjoy being able to take these risks. ISTPs hate stagnancy, and want to live life in the present moment. Sometimes they go straight towards temptation because it is something that feels good in the moment.

ESTPs are driven and focused people, who enjoy absorbing information. They want to be knowledgeable people, and enjoy researching. Although ESTPs are logical people, they also have a reckless side to their personalities. They enjoy taking risks, and truly hate being stagnant. ESTPs will sometimes jump headfirst into temptation, just because it feels good in that moment. They want to take chances and experience daring things in life. They don’t mind if these actions make a mess of their lives sometimes, simply because it means they get to really live their lives.

ISFPs are very moral people, who prefer to make the right choices in life. Although they want to do the right thing, they also have a tendency to follow their emotions and live in the present moment. This idea of wanting to follow their hearts, sometimes leads the ISFP towards temptation. They will often feel a lot of remorse when their actions hurt someone else, or appear morally wrong to them. ISFPs simply have a natural desire to live their lives in the moment, which sometimes causes them to act without using to much logical preparation.

ESFPs do care about making the right choices in life, and don’t want to hurt other people. They do have strong inner morals, but they are led by their desire to live in the moment. ESFPs enjoy being happy and want to do whatever feels good in the moment. This present minded attitude can cause the ESFP to dive into temptation headfirst. They sometimes struggle with having a strong will against the things that temp their desires, and will have a hard time overcoming this. ESFPs simply enjoy living in the present, and don’t always consider the future when doing so.