INFP Under Stress (Shadow Mode): The INFPs Unhealthy Dark Side 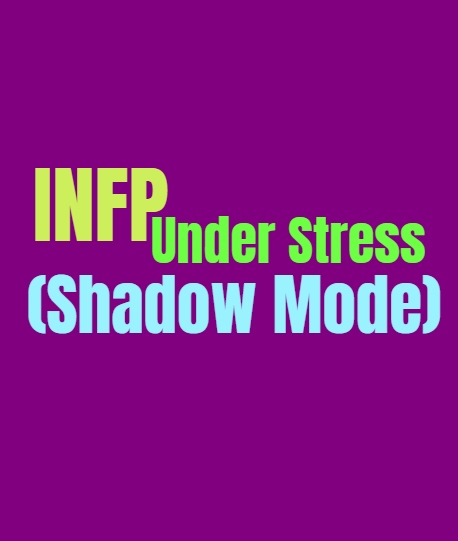 INFP Under Stress (Shadow Mode): The INFPs Unhealthy Dark Side

When different personality types are in their shadow they find themselves behaving much different than usual, in some circumstances this can be a bit unhealthy and hard for others to really understand. When the INFP is deep in their shadow and not knowing how to respond to this, it can become a bit difficult to be around or really handle. The shadow state often happens to the INFP when they are under times of extreme stress, pulling these functions which they don’t consciously use or understand quite so well.

When the INFP is healthy and allowing their normal functions to take the wheel, they are often much more comfortable with their own choices and easy to connect with. The INFP is dominantly led by their Fi (introverted feeling), which is what helps them make important choices. This causes the INFP to rely heavily on their inner emotions and morals, always striving to make steps towards doing the right thing. They care about being a good person, someone who follows the path of what is right and true, even if it isn’t always the easiest path. They do what they know is morally sound, and have a strong inner sense of self. This helps guide the INFP through many challenges in life, since they believe in looking inward to make choices and rely on their own beliefs.

INFPs also rely on their Ne (extraverted intuition), which helps them to make connections and patterns from the world around them. They use this intuition to find different connections to things, helping them uncover answers and problem solve in unique ways. This helps open the INFP up more, since it allows them to see possibilities in the world around them. It is what makes the INFP such naturally creative people, always ready to see what might come next. They can see the potential and not just what is evident or laid out in front of them. This helps the INFP to see what could be, and really opens up their minds. This is why INFPs are seen as imaginative people, who aren’t at all closed off to new things or possibilities.

Si (introverted sensing) is not the strongest function for the INFP, but it is within their natural stack. It helps them to use past patterns to connect to things, and can cause them to hold onto memories. They might not turn to this function for making choices, but it can make the INFP a bit more sentimental about things. They enjoy focusing on the past sometimes and can become nostalgic over situations which help them to hold onto position emotions and even figure out their next move sometimes.

The weakest function for the INFP is their Te (extraverted thinking) which is about processing external information and facts, helping the INFP to often remember details very well. This isn’t a function the INFP finds themselves all that comfortable with, not really turning to it for decision making in their lives. When it is a dominant function for types it makes them rather factual and detail-oriented people, for the INFP it just helps them to catalog facts for a later date.

What Happens in Their Shadow

In the INFPs shadow they no longer use these dominant and auxiliary functions the same way, instead they are relying on their shadow functions which don’t respond in the healthiest ways. Instead of using Fi, the INFP because focused on the emotions of others and their thoughts and opinions. They are using Fe (extraverted feeling) which normally focuses on the emotions of others and understanding those emotions. Fe turns to people around them and considers their feelings before making decisions. For a type which uses this naturally, it makes them empathetic and understanding people, who are great at figuring out how to make others happy. For the INFP this causes them to rely far too much on the opinions of others, basing their own moral beliefs on a group. This can be chaotic, and even cause the INFP to start to lose a sense of themselves. When they rely heavily on the opinions and morals of those around them, it causes the INFP to be inconsistent and not really know which path they should be following. They start using the beliefs of a group or of someone in a higher position of power, turning to them as a means of forming an argument. This can cause the INFP to appear much more passive aggressively, because they aren’t standing firm to their own inner morals and belief system.

Instead of relying on their Ne, the INFP often starts to use Ni (introverted intuition) in a much more unhealthy manner. They start grasping at sudden realizations or epiphanies, doing this in a somewhat haphazard manner. Ni normally focuses on cataloging facts and coming to useful conclusions from these pieces of information. For the types who use this as their more dominant and natural functions, it helps them to come to conclusions about future occurrences, and gives them an idea of what will happen down the line. The INFP starts to get hunches about things, without really having any true information to back this up. Instead of their Ne which helps the INFP make useful patterns, they start getting flashes of information and grasping at ideas which aren’t at all solid or natural for them. It can also cause them to be suspicious of others, having these ideas about them which come from them being in their shadow state, and causes the INFP to not truly see the truth in this individual. They might doubt people and see them incorrectly, which can create a mistrust and cause the INFP to alienate themselves from others.

Instead of their natural Si the shadow INFP finds themselves using Se (extraverted sensing) in the most chaotic of ways. They find themselves paying attention to physical details, but not really picking up on things all that accurately. They try to look at the world around them and notice little changes, even finding themselves recklessly jumping into things without processing it all accurately.

Instead of using Te which is naturally the weakest function for the INFP, the might begin using Ti (introverted thinking). This causes them to look at cold hard facts in a rather calculated and uncaring manner. They might use these facts to prove a point, but they do this in a harsh way, often hurting the feelings of everyone involved. This is definitely not normal for the caring and understanding INFP, and can certainly be an unhealthy function for them to process.

When this happens it is often because of times of extreme stress, and it does often occur for a reason. While it can appear unhealthy and even a bit toxic, the INFP likely needs to dive into their shadow during this time. They are often thrown out of their normal state of being, because it isn’t working for them in some ways. The INFP finds themselves not wanting to rely on those natural behaviors and functions, because something isn’t going right in their lives. Having this time in their shadow can certainly seem toxic and even a bit chaotic, but that doesn’t mean it isn’t necessary for a short time. It can help the INFP learn more about themselves, and even find that their natural functions are stronger when all of this is over with.

It often means the INFP needs to work through some inner demons, and the only way to do this is by diving into their shadow for some time. It can certainly be stressful for them and those around them, but at the same time it helps them switch things up in their lives. While we shouldn’t really try to develop these shadow functions, sometimes taking refuge in them helps us to uncover more aspects of our natural functions in the long run. It is certainly a defensive and stressful time for the INFP, and while they endure this they won’t feel much like themselves. While this INFP will be more chaotic and reckless, it isn’t their natural selves coming into play. Once they can finally get back to normal it can help them to realize how useful their natural functions truly are, and how much more comfortable they should be with understanding themselves and their own strengths and weaknesses.