INFP Motivation: How the INFP Can Overcome Procrastination 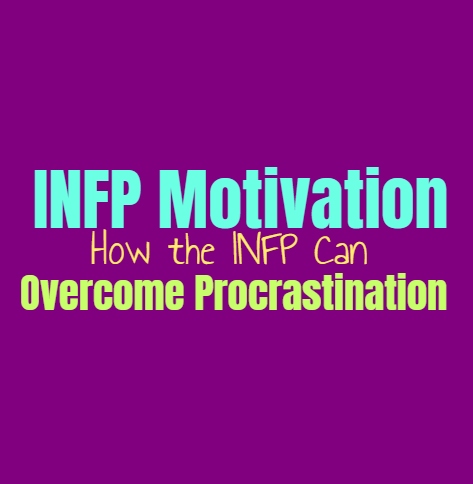 INFP Motivation: How the INFP Can Overcome Procrastination

For many of us motivation can be a challenging thing to conquer, and for some it can be even more difficult to overcome their procrastination tendencies. For the INFP this is certainly something they struggle with, since they have a tendency to become distracted by others things and not really want to focus on the tasks in front of them. INFPs become bored easily but also have rather active inner minds, which can cause them to drift in different directions. It is important for them to learn about strengthening their functions in order to adapt and become better at motivating themselves.

Why the INFP Struggles with Motivation

There are many reasons why the INFP often struggles the motivation, the biggest one is that they are easily distracted. When something new comes their way which inspires and excites them, then the INFP really does find themselves drawn in this direction. They have a hard time maintaining focus on things when it feels forced. They don’t enjoy obligation and feeling as if they are forced to get something done, or get it done a certain way. For the INFP having some freedom is important to them, or else they feel stifled. When they aren’t truly excited about what is in front of them, they really do have a hard time maintaining a sense of focus and finding this motivation.

Not only are INFPs distracted by things which excite them, but they can also become distracted by their own inner minds. They have such rich imaginations and inner worlds, and this makes it difficult for them to motivate to perform certain outside tasks. They have so much going on inside of their minds, so much richness which can keep them distracted and caught up for long periods of time. INFPs really do feel a sense of fulfillment inside of their own worlds and do enjoy a lot of time by themselves. Because of this they may not always feel this sense of outward motivation to get things done, especially tasks which bore them and feel much less rewarding than their own imaginations and minds.

INFPs don’t find it natural to focus on tasks which are repetitive or requires of them and so they do often lose interest. They don’t enjoy these types of boring tasks or projects, which makes it hard for them to really pull this motivation out of themselves. They often feel more inspired by bouncing around a bit, focusing on new things instead of the things which might feel a bit boring. INFPs might want to find motivation, but there are so many other things which just feel a bit more thrilling for the mind and heart of the INFP. This poses problems when there are certain things they really do need to take care of. For the INFP it really does have times where it becomes frustrating, especially when they want to find the motivation but are lacking the inspiration to really push themselves in that direction.

A good way for the INFP to work on building motivation is by working on their weaker functions. Sometimes strengthening the functions they struggle with can be a great way to learn to be a bit better at motivation themselves. Te is the weakest functions for the INFP, and this is one which does often help when it comes to motivation. Sometimes the INFP can work on this by reflecting their feelings in a more logical manner. Connecting what they have strengths in to the qualities they possess in much weaker ways.

INFPs may have to attempt to learn certain habit, simply by taking it one day at a time. When it comes to strengthening Te it is best if they come up with little ways to organize their lives and keep themselves on a schedule. While INFPs cannot do this all of the time, simply having certain days which are a bit more scheduled can be helpful. Setting alarms for certain tasks, or even allotting themselves a certain amount of time to just daydream, can help them feel a bit more structured. While it can be a challenge, having these guidelines are often necessary for the INFP. Having some sort of calendar to keep things visually in front of them, is a good way to give them reminders of certain tasks or chores they are forgetting or procrastinating.

Sometimes INFPs can benefit from imitating the structure of others, in order to find ways of really growing their weaker functions over time. They can learn from observing or having people around them who possess stronger Te and are willing to be patient as the INFP grows and learns. They do enjoy growing and having the chance to become a more well-rounded person, but that doesn’t mean the progress isn’t difficult. While they are original people in their lives, that doesn’t mean they cannot use imitation as a means of helping them to motivate and prevent procrastination in their lives. Watching how others do things and emulating them, especially those they respect, can really be beneficial for the INFP.

For the INFP sometimes incentives can actually be a helpful way to motivate themselves. If there is something truly important for the INFP which they want to get done, they can use incentives to help. They might be struggling to motivate themselves but that doesn’t mean they want to get this task done any less. So coming up with a rewards system and things they cannot allow themselves to have until the task is finished, can be surprisingly useful sometimes. Putting off their satisfaction until they can finish things, can certainly be a way for them to avoid procrastinating things until the last minute.

The important thing for the INFP is to find a balance with their motivation, and to not burn themselves out doing this. While they need to try and grow their weaker functions and focus more on things they need to adapt to. For the INFP pushing too hard in this direction can burn them out quickly, since working on weaker functions can do this for anyone. While trying to strengthen these functions can be truly useful in growing and becoming a better version of ourselves, this is something which should be done slowly and not all at once. INFPs can certainly find ways to motivate themselves better, but they don’t need to attempt to do this all in one day and end up crashing because of it. Balance is important and so they need plenty of time to themselves to dream and even procrastinate on occasion.