Can You Handle Networking with Others, Based on Your Personality Type 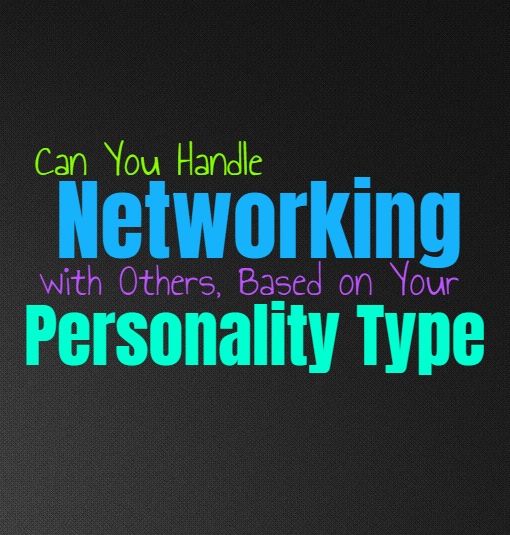 Can You Handle Networking with Others, Based on Your Personality Type

For some people networking is a simple task, and one that is truly important to them. For others it can feel draining to have to make these business type connections, especially when it doesn’t feel natural or comfortable. Here is how good you are at networking, based on your personality type.

INFJs might not enjoy having to network in order to grow their business or climb their career ladder. Feel forced to make these insincere connections can really leave them feeling drained. INFJs are often capable of socializing and getting to know people, but when it doesn’t feel natural it just isn’t something they feel like pursuing. For the INFJ networking can leave a bit of a bad taste in their mouth, and they often don’t want to participate in this at all. While they can push themselves through it, most of the time the INFJ will detest this.

ENFJs are often good at networking since they are naturals when it comes to socializing and connecting with others. They often know the right words to say in order to really spark a conversation, and can figure out how to behave around certain personalities. ENFJs are good at adapting and changing their behaviors to suite someone else, and so this really does help them when it comes to networking. If it is important for them to make a connection with someone, then the ENFJ will do whatever it takes to make this happen. They value being successful in the workplace, especially since this affects their loved ones too.

INFPs can become drained by the mere idea of having to network, especially when it pertains to business or climbing their career ladder. This type of atmosphere can be a bit exhausting for the INFP, since there is something about it that doesn’t feel quite sincere. They don’t like having to pretend or suck up to someone simply to make some sort of business connection. For the INFP these types of environments just aren’t best for them to thrive in, and often leave them feeling drained and at the same time tense.

ENFPs are social and often charming people, who enjoy connecting with others. Networking can be strangely easy and natural for them, since making friends is something they enjoy doing. ENFPs don’t mind that it feels a bit forced, because for them it is enjoyable to get to know new people regardless of if they normally would. They understand that these connections can be useful, and don’t mind getting to know someone and trying to make that person like them. ENFPs do sometimes want to be popular, and prefer to be received well by others.

INTJs accept that networking is an important part of business or of climbing their career ladder. INTJs who value their job and really want to progress, will certainly do their best to network perfectly. They are good at using their intelligence and knowledge to impress others, and will try to really showcase this in a useful but not obnoxious manner. They want to be able to progress and value their ability to network in the appropriate way. While sometimes pushing themselves into these situations can be a little bit draining, INTJs are capable of doing it.

ENTJs value being able to network and are often very skilled at it. They work hard to progress in their careers and don’t want to miss out on any valuable opportunities. They often know that networking is an important part of growing a business, or of climbing their career ladder. ENTJs will take the chance to really get things done the right way, even if that means having to network in order to make useful connections. They are actually rather social people, and they don’t mind connecting with others and making themselves seem charming and friendly.

INTPs often realize the importance of networking, especially when it comes to business. They can see that it is valuable to make the right connections, and often know who they should be networking with. While INTPs know the value of networking, actually executing this can be deeply draining for them. They aren’t fans of having to sell themselves, and forced socializing can be truly annoying for them. While INTPs might theoretically know how to network, doing it is another thing entirely.

ENTPs are good at connecting with others and are truly outgoing people when they want to be. Their charming nature can really help the ENTP network when it is important for them to do so. Sometimes the idea of having to network can feel a bit fake and annoying for the ENTP, and so it depends on their mood and the circumstances. If they do feel like it is important to do some networking the ENTP can often excel in this. They are social people who are good at making others like them, and they aren’t afraid to put on a bit of a show.

ISTJs are often capable and efficient people, who do whatever needs to be done in order to improve. If they are in a situation where they must network in order to grow and reach their personal goals in life, then they will certainly do this. They might not enjoy having to socialize or make connections in this way, but ISTJ are often capable of pushing themselves to do things they don’t really want to. They aren’t likely to just gripe about something because it is uncomfortable, instead they get the job done.

ESTJs are social people who do whatever they must in order to get the job done and reach their goals. If they are required to network in order to more forward and make valuable connections, ESTJs are capable of doing this. They might not be the softest or gentlest people, but they are rather outgoing and capable of connecting with people. They will do their best to entertain others and make bonds which will help them progress towards the right direction. They are hardworking people who do whatever it takes to accomplish their goals.

ISFJs are actually good at networking since they are friendly and understanding people. They know how to connect with others and make bonds which can be useful. While ISFJs are good at the social part of networking, they aren’t so good at being cut-throat or competitive about it. They know how to make friends and get to know people, and this is what aids them when it comes to networking for a job or position.

ESFJs are often great at networking, since they are social and compassionate people. They know how to connect with others and will do their best to be friendly and adapt to the situation. They do their best to use their sense of empathy in order to network the right way, For the ESFJ this can become a bit competitive, since they do want to be able to execute things perfectly. When they are networking they focus on the importance of these connections and do their best to be subtle about it as well.

ISTPs don’t usually enjoy having to network, especially not when it feels forced. They are charming people and so they are capable of networking if this is something they choose to do. For the ISTP this can just feel draining and a bit too forced, so they don’t really like following through with it. They would rather let things happen naturally, and if they make the right connections then so be it.

ESTPs are often great at networking when they feel inspired to do so. They can sometimes put their foot in their mouth though, and inadvertently say things which push people away. When the ESTP is actively trying to network this is a different story, and they are often very good at this. They are friendly and naturally outgoing people, who enjoy being able to connect with others. When they realize they need to do some networking in order to get what they want, the ESTP will certainly be good at this.

ISFPs don’t really like networking or feeling like they need to impress or show off for others. They want to let things happen naturally, and make friends with people without it feeling forced. Having to network in order to move forward in their career can feel draining and insincere to the ISFP. They often do better having someone who can advocate or them, and really help do the networking that the ISFP just does not feel comfortable with.

ESFPs are excellent at networking, often this is one of their greatest skills in any career. They enjoy getting to know others and are naturally very friendly people. They want to meet new people and make connections with just about everyone they come across. If the ESFP knows they need to get close to someone in order to advance in their career, this isn’t something they find challenging at all. They can often find some way to connect with just about everyone they meet, and really enjoy doing this.