ENFJ Type-A: How the ENFJ Can Fit Into the Type A Personality 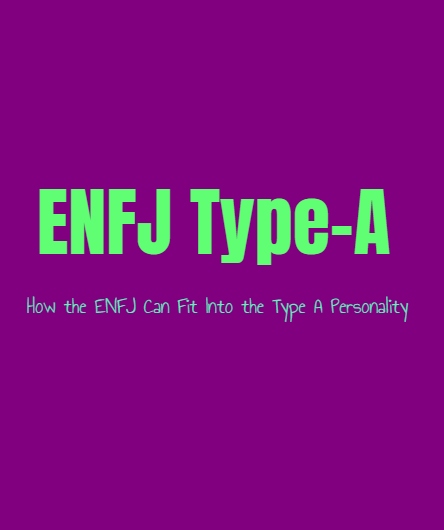 ENFJ Type-A: How the ENFJ Can Fit Into the Type A Personality

ENFJs are more commonly tested in the type T personalities, seeing as they are a bit more high strung and prone to stress. ENFJs are natural perfectionists and while they might find themselves somewhere in the middle possessing both traits, they do end up more inclined towards turbulent qualities. Here are some of the traits which become more prominent with the ENFJ-A personality type.

They Are Social and Assertive

ENFJs are naturally social people, who aren’t afraid of taking charge of a situation. They are usually rather confident in themselves and their abilities, which helps them to step into these situations without being fearful of the results. ENFJs enjoy connecting with others, and are naturally outgoing people. For them stepping into social situations can be rather enjoyable, since it gives them a chance to meet people and really get to know them. They are energized by the presence of others and really need to make connections in order to feel like themselves. For the ENFJ socializing is important and being around people often makes them feel a sense of comfort and joy. They are outgoing and friendly people, which helps them when it comes to being social and being in crowds of people.

ENFJs are also naturally assertive people, which does lend to the type A ENFJ even more. They are not afraid of taking charge when the situation calls for it, and can step in where others might fail to do so. They walk into these situations prepared for them and can often navigate the problems without much anxiety or fear. ENFJs know that they can handle the leadership role, because they are confident in their ability to understand others and figure out how to inspire and communicate with them naturally. This sense of confidence is what helps the ENFJ lead others, and guide them towards the best path for solving whatever problems might be in front of them.

ENFJs are naturally go-getters who don’t just sit around and wait for things to happen. This does lend to the ENFJ-A personality even more, since they are not afraid of making things happen. Instead of allowing self-doubt and fear to hold them back, they are willing to go after the things they want and need in life. ENFJs do often focus on doing these things for those around them, but even still they are forward and focused people. They don’t sit around second guessing their actions, since they realize that hesitancy can lead to them failing or falling behind. When the ENFJ is sure of themselves, they are confident in their abilities and will be much more capable of getting things done. This confidence is often what helps the ENFJ be go-getters and achieve the goals which are most valuable to them.

The difference in this for the type A ENFJ, is that they are much less afraid of failure than most ENFJs. While ENFJs are naturally capable of getting things done, they do often fear failure in the process. The ENFJ-A personality is much less afraid of these failings, and instead if willing to take them as they come. They are comfortable with making mistakes, as long as they can keep moving forward and still achieve the things which matter to them. They have a more laid back approach when it comes to these mistakes, and so they aren’t as anxious about things not going perfectly each time. These are certainly traits less commonly seen is ENFJs, since they are often perfectionists and this is something which can be hard for them to avoid. This is why ENFJs do often test somewhere in the middle, possessing both turbulent and assertive qualities in somewhat equal measures. The ENFJ who is less of a perfectionist will find themselves accepting the smaller mistakes, in hopes of being able to make the bigger picture more meaningful and valuable to themselves and those around them. As long as the people they love are happy and cared for, they become much less frustrated about the smaller mistakes or failings. This type of ENFJ realizes that they cannot control everything, but are focused on ensuring that everyone is happy and the more important things are working out as they should.

ENFJs will always be prone to stress from certain situations, which is something more tied to the turbulent personalities. It is rare for an ENFJ to be completely laid back and free of stress, mostly because they take on so much responsibility. The assertive ENFJ does find ways of minimizing this stress, and does their best to find a healthy balance. They want to focus more on being reasonably stressed in order to get things done, rather than feeling constantly anxious and afraid that they cannot get things done the way that they want to. While this can be challenging for the ENFJ, some do possess a much more laid back demeanor. This type of ENFJ wants to be able to get things done without allowing it to leave them feeling uneasy and overworked all of the time.

They often have learned this skill through their loved ones, and realize they are better when they are a bit more laid back about things. ENFJs care about making others happy and want to be able to enjoy the presence of the ones they love. Sometimes in order to truly do this, they need to let go of some things and not allow themselves to stress over the more insignificant details or things they cannot control all of the time.