Do You Enjoy Having Inside Jokes, Based on Your Personality Type 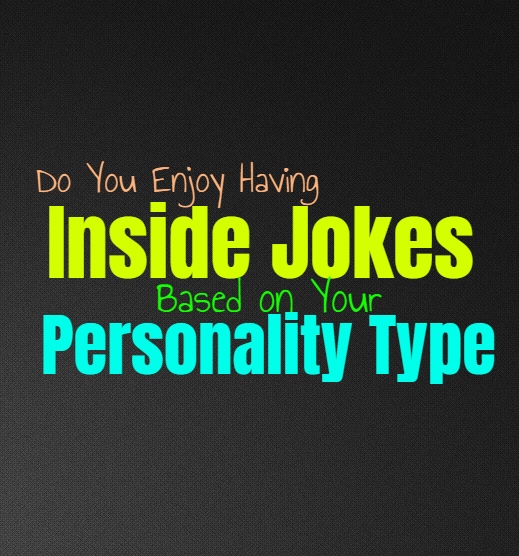 Do You Enjoy Having Inside Jokes, Based on Your Personality Type

Some people might become annoyed with the idea of inside jokes since it leaves others out, but to some it is a great and personal way to connect with a loved ones. Here is how you feel about inside jokes, based on your personality type.

INFJs do enjoy being able to have inside jokes with the people they are closest to. Having these special little jokes and sayings makes them feel more important to that person. While they don’t want to do this to upset anyone, they do like having a sort of bubble with their favorite people. For the INFJ having inside jokes is just another way of feeling bonded to someone, of recognizing that their relationship is special and unique. They don’t feel like it is unfair to have these connections which are personal and don’t require others to feel this way.

ENFJs do enjoy inside jokes most of the time, since it makes them feel special to someone. Having these connections and these sort of special jokes between them, makes it feel like this relationship is something that not everyone can obtain. For the ENFJ it is important to feel special to their loved ones, and like they are valuable. They realize that some people might be bothered by this but ENFJs do enjoy having close personal relationships which feel special and unique from the rest.

INFPs definitely enjoy having someone they can share special inside jokes with, since it makes them feel closer. They don’t do this to alienate people but for them it is valuable to feel like their connections holds something personal and unique. INFPs do find themselves more drawn to one on one connections and so this includes inside jokes and personal memories that other people might not understand or be open to.

ENFPs do enjoy having inside jokes but at the same time they don’t mind sharing them with some people. They aren’t always about one on one connections, although those are the ones they value the most. ENFPs want to be able to mix things up and don’t like feeling stagnant or stuck in the same position for too long. They enjoy being free to experience new things and new connections, but that doesn’t mean they don’t care about maintaining those special bonds and inside jokes they share with someone else.

INTJs might not be focused on creating inside jokes with people, but they do like having special connections. When the INTJ really cares about someone they do want to be close with them and so they understand that inside jokes are just a way to signify this bond. They don’t mind leaving others out, most of the time it feels more natural for them to do this. For the INTJ it is more valuable to have close relationships than have a long list of people they don’t really care that much about.

ENTJs do like being able to connect with a group of people, but at the same time inside jokes are something they might not be against. They do often let other people in on the jokes, since it feels rewarding to show that they have this special connection and that they are welcome to witness it. For ENTJs it doesn’t really matter if they have inside jokes as long as they feel committed and connected to that person. It is more about sharing a special bond which they know will last, than it is about the details and secret jokes.

INTPs don’t really seek out inside jokes or special ways to feel connected to someone like this. They simply happen naturally when they do feel really close to a person. INTPs are more interested in one on one connections, and might become drained being around too many people. Having these personal bonds often creates inside jokes or special memories that other people simply won’t be able to understand or appreciate the same way.

ENTPs do enjoy having inside jokes and special connections which make each bond special to them. For the ENTP it is valuable to have these bonds which seem unique and more personal between themselves and others. For the ENTP having these inside jokes makes them feel like they are important to that person and like they are someone they won’t simply forget and move on from, it makes them feel closer to their loved ones.

ISTJs aren’t really focused on having inside jokes but they do care about having close personal relationships. For them it is more about feeling a commitment and connection which is based on mutual respect and consideration. They don’t require inside jokes or things that other people aren’t allowed to know about, they just want to be sure that they are important to this person. For the ISTJ it is more about feeling that sense of commitment and being sure of it.

ESTJs might not mind having inside jokes but it isn’t something they require in order to feel close to someone. For the ESTJ it is more about the commitment and sense of closeness between two people. As long as they know that this connections is important and that it is based on something that cannot be shaken by some outsider, then they don’t need things like inside jokes to make them feel special.

ISFJs do care about feeling close to someone but inside jokes aren’t necessarily required. They don’t want to make anyone feel like they are being left out and do have a desire to include everyone. If someone they care for is upset by an inside joke it will definitely bother the ISFJ. They want to feel important and special to everyone they love, but they want to be sure that they aren’t hurting anyone else who they care for by having some sort of inside joke.

ESFJs enjoy feeling special to the people they love, and so sometimes inside jokes are valuable to them. It is more about feeling like this bond is important and unique, and is certainly something they enjoy having. When it comes to inside jokes ESFJs don’t want to hurt anyone’s feelings but they do enjoy feeling this sense of connection. For them it can be upsetting if someone gets hurt by it though, and they will want to find a way to make them feel special as well.

ISTPs do enjoy feeling special personal relationships but they don’t necessarily require inside jokes. They might enjoy sharing things with others in the right circumstances and so for them inside jokes can seem a bit pointless. They are fine with them happening naturally but don’t need to manufacture some sort of inside joke in order to feel like their relationship is important or special in some way.

ESTPs do enjoy having inside jokes because it makes them feel like they are special and important to someone. They might sort of share that they have these inside jokes, since it does make them feel more popular and liked. ESTPs don’t necessarily realize that these things are important to them, but for the most part having plenty of connections where they feel special to those people is something that matters to the ESTP.

ISFPs do enjoy having inside jokes, since it makes them feel closer to someone. They want to feel like they are special and share a connection which no one can invade or change. When the ISFP really cares for someone they want this relationship to be special and something that cannot be confused with any other connection they share. For them inside jokes are a nice way to really signify that they are special and that this relationship is more important than the others in some ways.

ESFPs enjoy inside jokes, even though they might share them with others without really thinking about it. It is more about knowing that they can have these inside jokes with someone, since their relationship is valuable enough for that. ESFPs develop inside jokes with the people they care for the most and spend the most time with. They do want to feel like they can create something that no one else can interfere with, and so inside jokes are actually important to them.