How Much of a Prankster Are You, Based on Your Personality Type 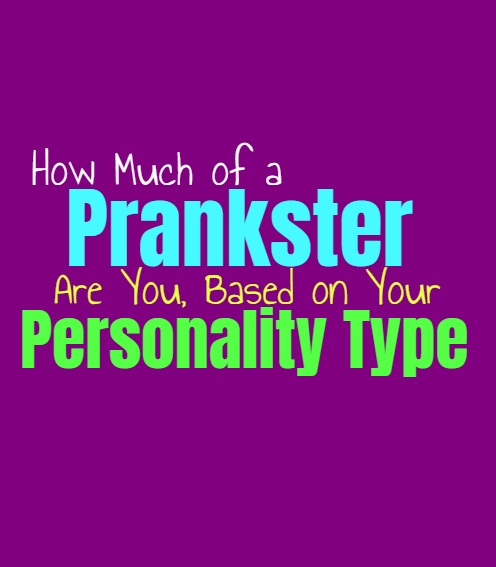 Some people are naturally good at setting up pranks, and they just enjoy being playful and a little mischievous. For others this can be an upsetting process and they really don’t like seeing people confused or upset by it. Here is how much of a prankster you are, based on your personality type.

INFJs don’t really like messing with people, especially in ways that can be upsetting. They are highly sensitive to the emotions of others, and so anything they do they want to be conscious of this. For the INFJ smaller pranks can be cute and fun, as long as they can’t sincerely hurt or upset someone. For them things like April Fool’s day can be foolish and become a bit overwhelming. They can see how things can get out of hand and their intuitive abilities often make them anxious about just how far this is going to go.

ENFJs aren’t usually interested in being a prankster, especially when it seems to go too far. They can certainly be playful people and so they enjoy less serious ways of playing pranks and jokes on people. As long as these pranks aren’t going to take things too far or cause people pain, then they aren’t against it. While ENFJs are caring and compassionate people, they are also fun and enjoy doing things which can be a bit more playful and even silly. They don’t like being uptight and so they can certainly take part in a good prank as long as it is entirely harmless.

INFPs enjoy being playful but they don’t want their actions to hurt someone. For them pranks can be fun, but they do sometimes get upset when someone pulls a prank on them. For the INFP it depends on how malicious their choices are with the joke or prank. INFPs do sometimes get caught up in things and might enjoy the idea of being a bit playful and messing with someone, especially when it seems to fit the circumstances or the persons personality.

ENFPs are playful people and so they do often seem like pranksters. They like to laugh and make things fun and positive around them, and so sometimes pranks can do this. ENFPs don’t want their pranks to be hurtful, but sometimes they like making jokes which can be a bit unnerving for people at times. ENFPs just do this all in good fun, but they can take it further than some people enjoy. They don’t let the pranks go on for too long though and will often express that it is a joke soon enough for it to calm the situation down.

INTJs don’t usually enjoy pranks too much, especially when it can cause them to feel frustrated with people. At the same time they do like to unwind and have fun, and so some pranks might not be so bad to them. INTJs are more likely to enjoy being a prankster, than they are getting pranked by someone else. They might find the idea of playing harsh jokes on people to be a bit idiotic, especially when it can be dangerous and leave people feeling confused about what the truth is.

ENTJs can be playful people sometimes, especially when they are trying to unwind. They work hard but at the same time they like to enjoy themselves and play hard as well. There are times when the ENTJ might enjoy being a prankster, just to push the boundaries and see how it goes. For them it is fun to really push the limits, especially if it seems like they can really work someone up for a short time. ENTJs can have rather over the top senses of humor and so they do like pranks sometimes.

INTPs might not enjoy being a prankster because they don’t want people to fail to take them seriously. They do have times when it can be fun though, especially if they want to see how people will respond. INTPs don’t like stagnancy and want to be able to shake things up when they have to. For the INTP sometimes being a prankster just means pushing the limits and seeing how people will respond and what sort of information they can learn from this.

ENTPs do enjoy being pranksters since they like pushing the limits and seeing how people respond. For the ENTP it is enjoyable to really push things and not be afraid of taking these risks. They do sometimes come across as pranksters, since they do take the opposite point of view in order to debate and really learn more about the other side. ENTPs do whatever they can to learn and grow, but sometimes they like pushing buttons just to have a little bit of fun.

ISTJs don’t really like being pranksters and are rarely seen this way. For them this seems a bit foolish and possible a bit harmful. They don’t like pretending or spreading false information, even if it is just for a moment. They prefer to make sure they are doing things the right way and don’t want to leave others feeling like they have lied to or fooled them. For the ISTJ being a prankster isn’t really a good thing, and so most of the time it isn’t in their MO.

ESTJs do have a playful side and might enjoy pulling the occasional prank. ESTJs are more likely to do this when they are about to deliver good news, but they might pretend it is bad news beforehand. They like to hype people up and get them excited for something this way. Most of the time ESTJs enjoy being playful, but they also believe in remaining focused and getting the job done when they need to.

ISFJs don’t often enjoy being pranksters since they don’t like upsetting people. They can feel guilty easily when something doesn’t go as planned or when someone gets hurt by a situation. For them pranks can seem harmful, especially when it stresses someone out or makes them feel alienated. ISFJs enjoy having a good time but they don’t usually think teasing or pulling pranks on people is all that fun or kind.

ESFJs aren’t usually pranksters, but that doesn’t mean they can’t pull the occasional prank. For them it has to be something harmless which won’t upset others or stress them out. They want to be able to be considerate of others and be supportive of their feelings. ESFJs will do their best to avoid letting someone get hurt, and so if they pull pranks they want to be sure they are harmless and fun. Even in this case they might feel guilty afterwards since they are naturally sensitive to the feelings of others.

ISTPs can certainly be pranksters since they enjoy having a good time. For the ISTP it is fun to live in the moment and do what excites them. Pranks can be a fun way to interact and even push the boundaries a bit. ISTPs don’t want to be harsh but sometimes pranks are just a light way to mess around and be a bit mischievous.

ESTPs do sometimes enjoy being pranksters, and want to live in the moment and do whatever excites them. They sometimes push the limits of things since they want to see what happens. ESTPs also can try to cross certain boundaries, but this often helps them figure out where those lines are for the future. They can certainly be pranksters since they enjoy having a good time and doing things which can be a bit thrilling.

ISFPs can sometimes be pranksters, especially with the people they love. They enjoy having fun and doing things which can be a bit playful and even mischievous. They like to push the limits and don’t want to live their lives in a state of stagnancy. Sometimes pranks can be fun, especially if they are silly and minor. ISFPs don’t like serious pranks which can hurt or upset people though and in this case they can become angry with people who do this.

ESFP
ESFPs can certainly be pranksters, since they enjoy playing around and making jokes. ESFPs want to live in the present moment and do the things which excite and entertain them. Sometimes they get caught up in the fun and excitement and this can cause them to turn into pranksters. They don’t like upsetting people though, and will certainly take a step back if someone they love becomes upset.