What Being Thorough Means to You, Based on Your Personality Type 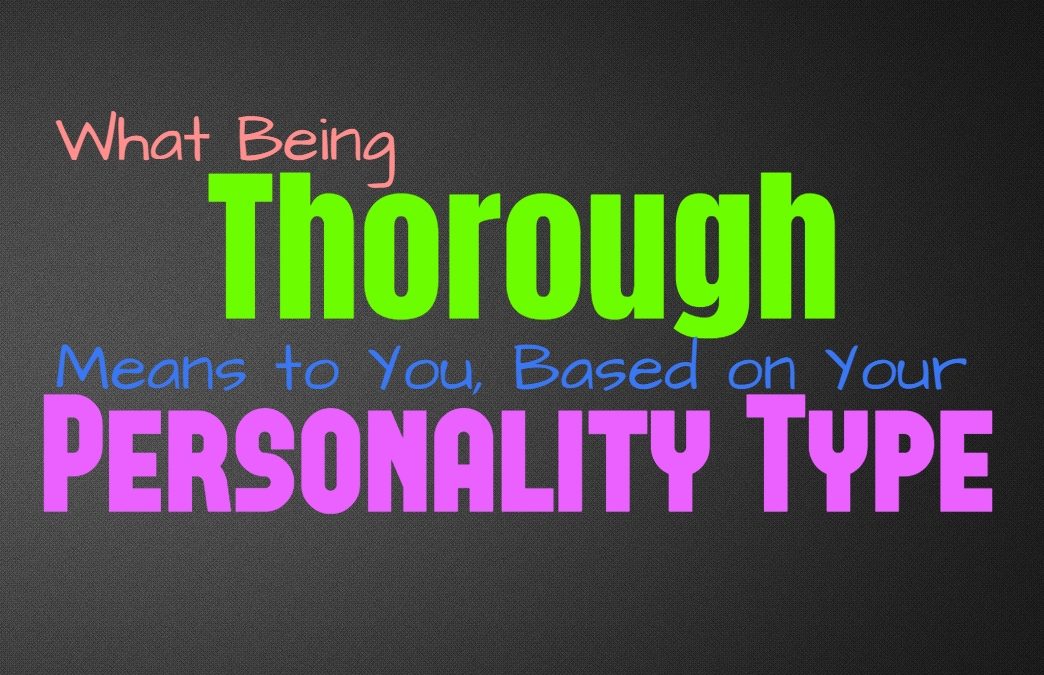 What Being Thorough Means to You, Based on Your Personality Type

For some people it is important to be thorough in everything they do, while others sometimes feel like this is being a bit nitpicky and maybe even wasting time. For each person being thorough means something different, and so here is what it means to each personality type.

INFJs can certainly be thorough, especially when they are working on something important. They are perfectionists and so they don’t like leaving anything up to chance. For the INFJ it is important to read through things and really make sure everything they do is up to their own standards. INFJs can certainly be thorough with the things they value and find important, whereas other less vital things they might overlook certain details. For the INFJ it often depends on their current state of mind and what they are working on.

ENFJs are perfectionists and so because of this they are definitely thorough people. They want to be sure that every detail is properly taken care, and don’t like making any mistakes. Instead of taking chances and just brushing past something, ENFJs want to be sure they are thorough with the details and can get everything done properly. They can be rather hard on themselves if they make any mistakes, and so being thorough is important for the ENFJ.

INFPs aren’t always the most thorough people, mostly because they dislike anything that seems tedious. Having to work on anything that drains their energy and having to focus on the tiny details, just isn’t something the INFP is all that good at. They focus on the bigger picture in most situations, and their minds just aren’t interested in having to obsess over being thorough when it doesn’t seem necessary for them to do so. INFPs also become bored easily and so they would rather focus on the aspects which are inspiring to them.

ENFPs are capable of being thorough when there is something they are deeply passionate about or skilled at. They know how to get things done to the best of their ability, but they don’t always feel the need to focus on the smallest details. ENFPs often realize that in certain circumstances focusing on the small details and being overly thorough, just isn’t necessary. They are capable of cutting corners when need be, and for them this often works out just fine.

INTJs are very thorough people who believe in getting things done right the first time. They are often thorough in just about everything they do, from their research and even down to their personal lives. For the INTJ it is important to know even the smallest details, since this could play a larger role than people realize. They believe in doing everything with a sense of focus and efficiency and don’t want to make any mistakes. For the INTJ being thorough is truly important, and is something they believe in.

ENTJs are definitely thorough people since they believe in getting things done as efficiently as possible. They don’t want to make any mistakes and want to get things right the first time around. Because of this desire to get things done efficiently, being thorough is deeply important for the ENTJ. They focus on even the smallest details and want to be sure they are completely educated in whatever it is they are doing. For ENTJs being thorough is important, and so they try hard to focus on every step.

ENTPs are thorough when it comes to research and uncovering information. They want to be sure to learn every detail and unearth as much as they can. For ENTPs it depends on the circumstances and if being thorough is really necessary. There are times when they would much rather focus on experiencing what is in front of them instead of having to obsess over the tiny details. They are good at being thorough when they need to be, but sometimes they just like diving into the unknown.

ISTJs are definitely thorough people and believe in getting every detail just right. They are perfectionists who believe in getting even the smallest details right. They don’t want to make mistakes and instead want to get things right the first time around. For ISTJs being thorough is vital and is something they believe is very important. If they aren’t thorough that means something important could go unnoticed and they don’t want that to happen.

ESTJs value being thorough very much and feel it is important to focus on even the smallest details. For them it is really vital that they don’t miss anything the first time around, since this can lead to mistakes. ESTJs value efficiency and so to them it can feel like a major failure if they don’t get it right the first time. Because of this desire to get things right ESTJs want to be thorough and focus on every detail.

ISFJs definitely believe that being thorough is important, especially with tasks they want to get right the first time around. They are perfectionists who focus on being as efficient as possible so that they can take care of their loved ones. ISFJs want to provide for the people they love, and work hard to make them happy. Their desire to take care of those around them makes the ISFJ want to be perfect, and believe in getting things done as thorough as possible.

ESFJs believe in being thorough with the more important things in life, and don’t want to make any mistakes. They care about their loved ones and really want to do whatever they can to make them happy. ESFJs put a lot of pressure on themselves to be perfect for those around them, and so they do often hold an importance in being thorough. For the ESFJ it is about being able to make their loved ones happy and do what they need.

For the ISTP it isn’t vital to be perfect with everything they do, and so they don’t always have a need for being thorough. They would rather be in the moment and take things as they come. There might be certain tasks that the ISTP realizes requires a more thorough hand, and they are certainly more than capable of handling this. When it comes to day to day tasks they really don’t care much about how thorough they are, since they know that minor mistakes aren’t that big of a deal.

For ESTPs being thorough really isn’t that important with most things, since they prefer to take life as it comes. They live life in the present moment and want to enjoy things instead of obsessing over the smaller details. ESTPs can work on being thorough when it comes to the workplace, but in many other situations it seems like too much pressure for them. They would rather deal with the more important things to them, and deal with those larger details.

ISFPs don’t care much for being thorough, and this often feels a bit uptight for them. They would rather enjoy things in the moment and follow whichever direction feels right for them. They want to do whatever inspires them most, and don’t like feeling stuck on the insignificant little details of a situation. For the ISFP being overly thorough is draining and isn’t something they are at all interested in.

For ESFPs being thorough often feels like a drain on them, and is a complete waste of their energy. They don’t like focusing on the smaller and more tedious details of a situation, instead they want to focus on what actually matters to them. ESFPs believe in living in the moment and doing what inspires them most. They follow their hearts, and don’t want to become held back by anything that is too tedious.