Just How Much Magnetism Do You Possess, Based on Your Personality Type 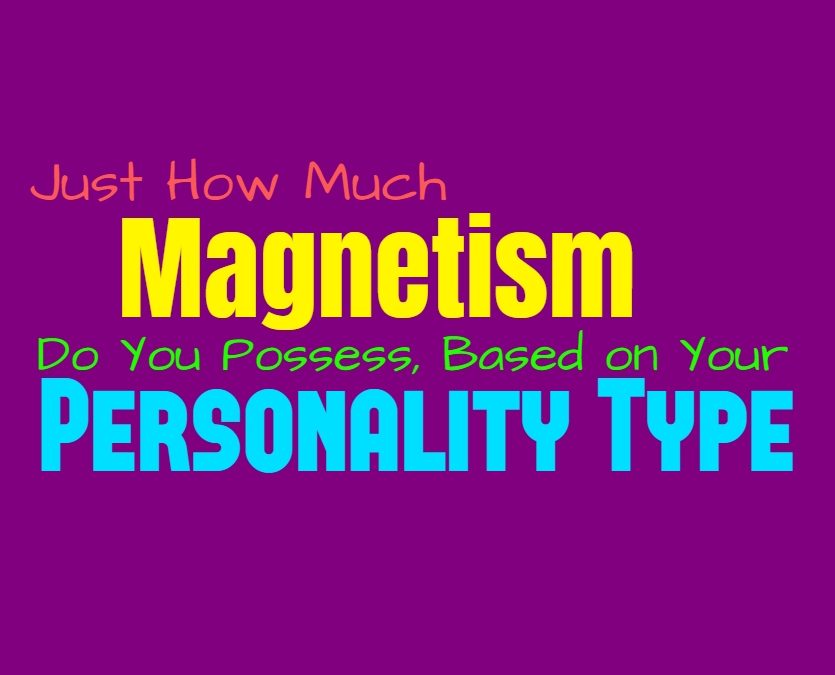 Just How Much Magnetism Do You Possess, Based on Your Personality Type

Some people possess a strong sense of charm and magnetism, which is something that comes somewhat naturally for them. They draw others into their orbit in a way that makes them like flies to honey. For some people this isn’t something that comes naturally, and they have to work to get people to see them on a deeper level. Here is how much magnetism you possess, based on your personality type.

For INFJs their sense of magnetism is something that only attracts certain people, those which can see past some of the awkward exterior and into the intensity of who they are. INFJs do possess this magnetism, but it is often something that happens when people actually see beyond some of their walls and layers. INFJs can often put off a mood which makes it seem like they aren’t really open to people seeing who they are. For the INFJ this is something they often shut off without even realizing it, since they do have a magnetic energy within them.

ENFJs are charming people who have a way of drawing others in. They are outgoing and friendly, and enjoy having people close to them. Most ENFJs are definitely magnetic people, especially to those who are in need of help. People can see the giving nature of the ENFJ and this is something they often flock to without fail. This can be both a good and bad thing for the ENFJ, since sometimes it leads to more toxic people who seek to monopolize their kindness in less than positive ways.

INFPs are unique people, but they sometimes have a more awkward exterior. Their sense of magnetism isn’t really something that occurs outwardly unless they really tap into this part of themselves. INFPs are capable of immense charm, and are also known to be some of the more magnetic performers out there. This is something they often have to develop, by becoming more confident in their awkward traits and realizing that these things are actually more charming than they realize.

ENFPs do have quite a sense of magnetism and charm, and easily can draw others into them. They are outgoing and amusing people, who are great at finding the right words to really intrigue others. They also enjoy this attention and do their best to keep it going most of the time. ENFPs enjoy being magnetic people, since they crave that feeling of connection and want others to see them for who they truly are. For the ENFP this magnetic part of their personality is something they really try to harness when they are younger, but might grow bored of it as they get older.

While INTJs can be incredibly intense people, their magnetism is something that only works on a certain type of person. Many people can be put off by their intensity and blunt personalities, while others are completely captivated by it. INTJs aren’t naturally the type of people who seek to draw others in, and often put off a vibe which expresses their strong desire to be alone. For the most part they don’t possess a strong magnetism, but for some people there is something mysterious about them which does create a sort of pull.

ENTJs are outgoing people, and sometimes their sense of dominance and power is something that creates a real draw for others. There are people who are pulled to that strength, and find that the ENTJ does possess a great deal of magnetism. For the ENTJ it does depend on the person, but it isn’t uncommon for their natural energy to draw others in, especially those who are impressed by strength and intelligence.

INTPs have rather unique personalities, which can certain possess a great deal of magnetism for the right people. For some people their brand of intensity isn’t really alluring, and might even be something they find to be awkward and standoffish. For others there is something truly intriguing about the INTP and the complexities within them. The trouble is that INTPs often put up walls and attempt to hide themselves from others, which hinders any chance of possessing a sort of magnetism.

ENTPs definitely possess a great deal of magnetism and charm, since they are such outgoing and creative people. If the ENTP does want to draw others attention towards them, they often know just how to do this with ease. They are good at making themselves out to be the entertainer in the room, but they do this in a way that can paint them in a more positive light as well. ENTPs do have a sort of magnetism to their personalities, but this is often something that is developed as they get older.

ISTJs might not be the type of people to possess a great deal of magnetism, mostly because this isn’t the vibe they are putting off to others. They often dislike the idea of drawing people in, and don’t really want all of the attention on them. ISTJs are more interested in being on their own most of the time, and this is something they naturally express without really trying to do so. While ISTJs are capable of being friendly and social people, that doesn’t mean they possess a magnetism that is constant.

While ESTJs can be very outgoing and friendly people, they don’t usually possess a natural magnetism. This is simply because they can have moments of being standoffish and even a bit tactless. ESTJs say what they mean without holding back for the sake of someone’s feelings, and this can be a bit unnerving for some people. While they are capable of commanding a room and often have plenty of friends in their lives, ESTJs aren’t necessarily the type to possess natural magnetism.

ISFJs are friendly and kind people, but at the same time they can appear more internalized. They do have a way of making people like them and are capable of drawing others in at times. For the ISFJ it is more important to focus on their family and loved ones, than to try and make everyone like them. They do sometimes possess a certain type of magnetism, although it might not be as noticeable as it is for some other types.

For the ESFJ their sense of magnetism often depends on where they are currently at in their lives. They do know how to be charming people, mostly because they understand the wants and needs of others. For the ESFJ their ability to possess a sort of magnetism, is something they choose to turn off and on. They know how to draw others in, but sometimes this just isn’t their main focus in life and so they put off an energy that is quite the opposite.

ISTPs actually do possess this natural magnetism, since they are often seen as mysterious people. At the same time they don’t really do this intentionally, since they prefer to be on their own in most situations. They don’t necessarily mind this though, since it can feel flattering that people are so naturally drawn to their sense of charm and intrigue.

ESTPs are charming people and so this does lend a sort of magnetism to their personalities. Many ESTPs know how to say the right things in order to interest others or drawn them into their orbit. For them it is more about drawing in the right people, but when they are young the idea of being popular can be a bit appearing for the ESTP.

ISFPs can sometimes go unnoticed in certain ways, since they can be seen as the more timid types. This is entirely untrue, but this can be what people see when they fail to look a bit deeper. For the ISFP their magnetism is something that often comes out as they get older and become much more confident in who they are and what they want from life.

ESFPs absolutely have a natural magnetism which leaves others wanting more. They might be over the top at times, but they constantly having people buzzing around them for attention. ESFPs are outgoing and charming people, who definitely know how to draw the attention of the room in their direction. While they might become tiresome for some people after a while, there is no denying their natural magnetism.