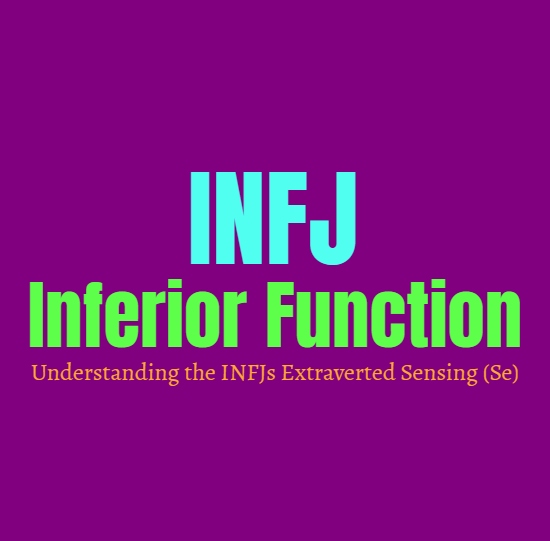 The INFJs inferior function is their extraverted sensing (se) which focuses on the physical world around them. This is something which the INFJ does not use quite the same way they do their dominant function, as it is often repressed. They put much more weight onto their introverted intuition, and can find it difficult to see where their Se actually comes into play. While it might appear like the INFJ does not utilize this function much at all, this is simply because of where it is placed in their stack. While it might be their inferior function, it still has an important job to do for the INFJ. This works with their introverted intuition, helping to balance things out and prevent them from relying too heavily on their dominant functions to the point where they cannot be a well-balanced individual. This is why understanding the full function stack and recognizing the finer details to each personality type, is so very important in understanding them sincerely.

What Is Extraverted Sensing (Se)

Extraverted sensing is very focused on the present moment, as well as the physical world surrounding it. Instead of looking too far into the future or into the past, this function places a heavy importance on the present. This also makes extraverted sensing users much more drawn to physical things, whether it be working with their hands, enjoying the scenary, or sports of some kind. They are very focused on things they can tangibly see, smell, hear, touch and taste- really anything which is connected to their senses is going to catch their attention more. While others might enjoy imagining future ideas or scenarios, Se drives people to live their lives in the present and focus on something they can obtain in the here and now. This can make people rather impatient, not wanting to spend time waiting for something when they can find something just as thrilling in front of them. They are often great at anything physical, good at paying attention to their surroundings without becoming distracted by other things outside of what they can see and absorb. It can appear to be a rather spontaneous and even reckless function, since it drives people to seek out momentary pleasure without much care about the future ramifications of those actions.

The Role of the INFJs Inferior Function

While their extraverted sensing might not be their main way of making choices and responding to the world, it does play a useful role for the INFJ when used properly. This works along side of that introverted intuition, and gives them an even better sense of the outside world. It can help the INFJ when it comes to predicting future outcomes, especially pertaining to loved ones. INFJs are naturally connected to people and want to help them, and their extraverted sensing can play a role in this as well. It helps them to pick up on certain physical changes, and little things they would normally not focus on as much. Sometimes this gives the INFJ an idea that someone is different or not looking well, since they are more connected to the physical than they normally would be. This is something which can also help the INFJ appreciate the beauty around them, as they are naturally inclined to enjoy things like nature. While the INFJ might not be solely focused on the present moment and the physical aspects of the world, they can enjoy things like hiking or spending time outdoors with their thoughts to keep them company. This healthy combination of functions can make the INFJ a much more well-rounded and capable person. They do utilize this Se in many ways, they just do not apply pressure on it for long periods of time. The healthy INFJ takes note of things, allowing their Se give them a chance to be present in the moment for short amounts of time- but not allowing this function to take control of things where their dominant function should be navigating.

INFJs are naturally future focused people, with rich inner minds and imaginations. They enjoy spending a lot of time inside their own thoughts, and don’t really focus as much on the physical world around them. This can cause them to seem easily distracted, or even capable of being a bit clumsy because of this inferior Se. When the INFJ applies too much pressure to their dominant function and doesn’t give their other functions a chance to take some control, they can go into their grip. This also occurs when the INFJ is under extreme stress, and they find themselves unable to process things in their normal ways. When this occurs their inferior function becomes the main focus, taking the wheel and steering the INFJ in a totally different direction. The normally thoughtful and internal INFJ becomes much more social and even a bit reckless. They find themselves drawn to physical things, often spending more money than they can afford on items and materialistic goals. Normally the INFJ would not be swayed by things they find shallow, but when their Se takes charge this becomes their main focus.