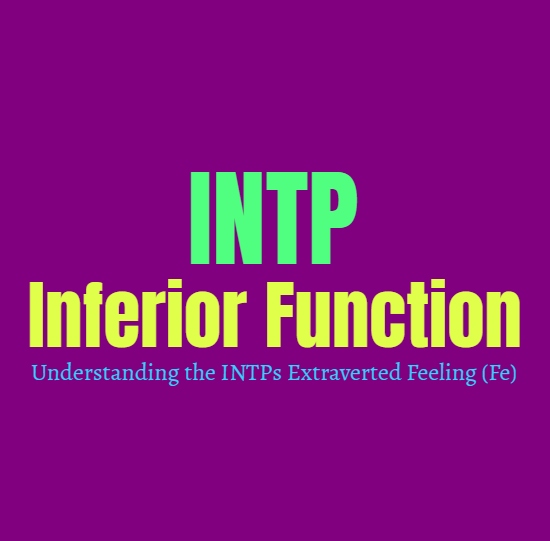 The INTPs inferior function is their extraverted feeling (Fe) which focuses on the emotions and needs of other people. For the INTP this function is certainly not their most prominent, but it does play an important role in the way they process things and behave. While their inferior function doesn’t dictate their choices in the way their dominant introverted thinking (Ti) does, it still is important in helping the INTP maintain a sense of balance. Without this Fe they would become far too focused on one way of thinking, and it could actually create a very unhealthy INTP. They need a combination of these functions in order to be a well-balanced and mature version of themselves. In order to grow and see things from different angles the INTP really needs use of their extraverted feeling function, it just doesn’t display itself in ways which are as obvious as the introverted thinking.

What Is Extraverted Feeling (Fe)

Extraverted feeling is hyper focused on people and in connected to their needs and inner desires. It is weighed based on outside views and goals, and makes people who use this as their dominant function become very focused on the needs of others. People who use extraverted feeling as their dominant function strive to be everything to everyone, wanting to fulfill their needs and be there for them at all times. These people are very focused on the emotions of others, and can sense when someone is truly in need. This gives them a connection to people in a rather impressive way, and causes them to strive to make others happy. These types of people can be rather compassionate, wanting to show that they care and be sensitive to the needs and emotions of others. They can often sense what is appropriate, and how to avoid hurting people’s feelings even inadvertently. Someone who uses Fe is often more connected to other people, rather than their own internal needs. When this function is placed lower on the function stack, it behaves in much different ways and doesn’t necessarily cause the individual to be quite as focused on the emotions of others. Since for dominant Fe types, this can actually cause them to neglect their own needs in hopes of caring for others, as this comes more naturally for them.

The Role of the INTPs Inferior Function

Ideally the INTP will utilize all of their functions in a combination which helps them to respond to the world in a healthy and natural way. Ti is their dominant function which is how they base most of their choices, but that doesn’t mean their inferior Fe does not play a vital role in making the INTP a well-rounded individual. At their best the INTP uses Fe as a means of nurturing healthy relationships, and taking into consideration what other people need. While their main form of making choices and understanding the world is based on a logical dominant Ti, that doesn’t mean that the needs of others are not important to the INTP. They do care about their relationships and the INTPs loved ones mean a lot to them. In order to maintain those connections, their inferior function is vital. It helps them to gauge when to be sympathetic, and when to stop asserting themselves as a problem solver in the lives of others. This function is not something they use constantly, but it can come into play when the INTP is needing to be supportive, and when they want to really be there for someone they love. INTPs can be compassionate people, it just isn’t easy for them to focus on these emotions constantly. Instead they need to revert back to their dominant Ti as a means of solving problems and approaching things logically. They have to utilize this Fe as a means of maintaining relationships, or the INTP becomes reclusive and distant in ways which do not fulfill them.

When the INTP has applied too much weight and pressure to their dominant introverted thinking (Ti), or when they are under times of extreme stress, they can go into their grip. This personality type starts to place much more strain onto their inferior extraverted feeling (Fe), and becomes a much different version of themselves. This happens to a lot of types when they are under stress or feel like the use of their dominant function is not giving them what they need. During this time the INTP becomes more focused on outside opinions, weighing their choices and even past against what people expect from them. Instead of searching inward and understanding their own firm sense of logic, the INTP starts to question everything. They might ask others what their thoughts are, wanting to converse with people and seek out means of approval in ways which are unusual to the INTP. Instead of looking at things from an impartial and logical point of view, the INTP starts to base things more on feelings and morals. They might turn to someone who is strongly moral and idealistic, seeking out their guidance in order to determine if they are a good person or are making the right choices.