INFP Loss: How the INFP Copes With the Many Forms of Loss 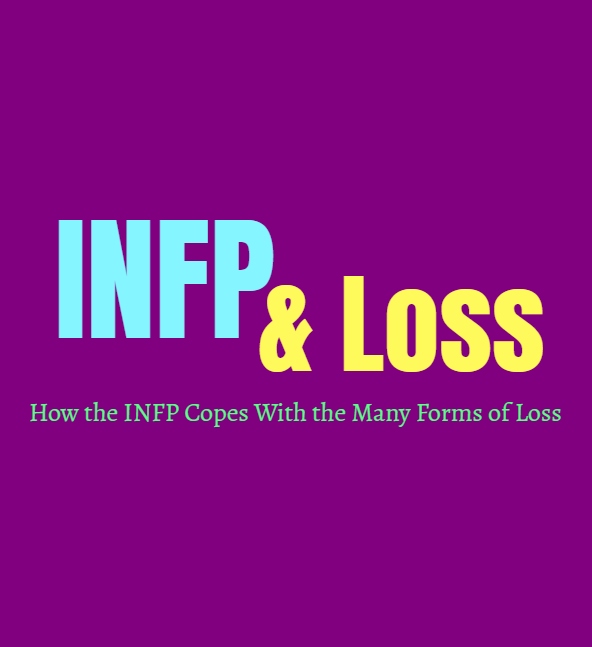 INFP Loss: How the INFP Copes With the Many Forms of Loss

While loss often hits INFPs very hard, that doesn’t mean they don’t handle it appropriately. They aren’t likely to ignore their pain and loss, where other types might try to push these feelings aside. INFPs are accepting of their own inners emotions and have often learned over time how to best handle and cope with them. Since they are capable of dealing with these feelings instead of neglecting or denying them, this can make the grieving process much more natural for them. While INFPs feel things very deeply, that doesn’t mean they are overly emotional people who cannot cope with those deep inner feelings. It is important to understand that just because INFPs value their inner emotions and feelings as prioritizes, that doesn’t make them over the top or dramatic people.

For INFPs it is important to accept the existence of their emotions, rather than try to bury them or deny their existence. Some people have a tendency to pretend they are fine and completely ignore their inner emotions, and for the INFP this is not natural. They need to accept what they are feeling, even if they have to do this in stages and steps. INFPs don’t enjoy denying their own emotions, as this is an important part of who they are and how they perceive the world around them. They need to be able to take the appropriate time to understand what they are feeling so that they can heal from this. Whether this be a major loss like the death of a loved one, or a loss of a friendship, or even just a loss of something from their past. It doesn’t matter how minor or severe the loss is, INFPs do best when they allow themselves to feel everything along the way. Sometimes people really need to bury those emotions, and don’t know how to cope with them for long periods of time. For the INFP there is of course a phase of denial, but that isn’t something they can stew in for too long.

Some people might see the INFPs connection to their inner emotions as a weakness, when in truth it can be a great strength. Their inner feelings are strongly connected to their sense of morals, and this helps the INFP stand firm in their beliefs. This also is how they process the world around them and helps them to come to conclusions about themselves and others. When the INFP experiences loss, they need to allow this to connect to those emotions instead of trying to find logical answers right away. Instead they just need to feel whatever goes through them, not always needing to make a clear sense of it in the way others might have to. Not everything needs an in depth explanation for the INFP, instead they know they need to process those experiences in order to eventually understand them better.

Initially the INFP might need a lot of time to themselves in order to process what is going on. Being that they are introverts they do need plenty of alone time in order to recharge, and this often opens when they experience a serious loss in their lives. While others might worry about this, it is perfectly natural for the INFP to retreat inward for a while. This doesn’t mean they don’t want support or to have people let them know they care, they just also need their boundaries respected when they show that they need to be alone. The INFP needs to retreat and spend a lot of time inside of this shell, as this helps them sift through what is going on inside of them. They often experience a storm of overwhelming emotions, and when they go through something serious like loss the INFP needs to find a way to process this without feeling drained by the needs of those around them.

Eventually INFPs do want to be around their loved ones and feel that sense of support. They will likely show signs that they need to reach out, but they need to feel it reciprocated. Their close relationships are very important to the INFP and they want these people to be part of their growth. Sometimes all the INFP needs is someone who can sit with them in silence while they think everything through. It isn’t always about having a person say the right things, INFPs don’t need empty words. They want someone who can be there for them even when they are a mess, or when they are feeling completely lost and confused. Feeling this person’s love and comfort will help the INFP through so much loss and pain in their lives. Often they just want to be heard and understood, and this helps them move forward.

The biggest thing for INFPs is their tendency to blame themselves, and in order to move on they definitely need to let go of this. They know how to keep moving forward and how to accept what they are feeling, as long as they can forgive themselves for any potential mistakes along the way. Instead of constantly trying to internalize things and take the burden on themselves, the INFP will benefit from being around someone who can help them see things more logically. For a while they need to just feel everything and not analyze it, but once they have come out of that rabbit hole, the INFP does need a unique perspective to help them move on and let go of that loss.