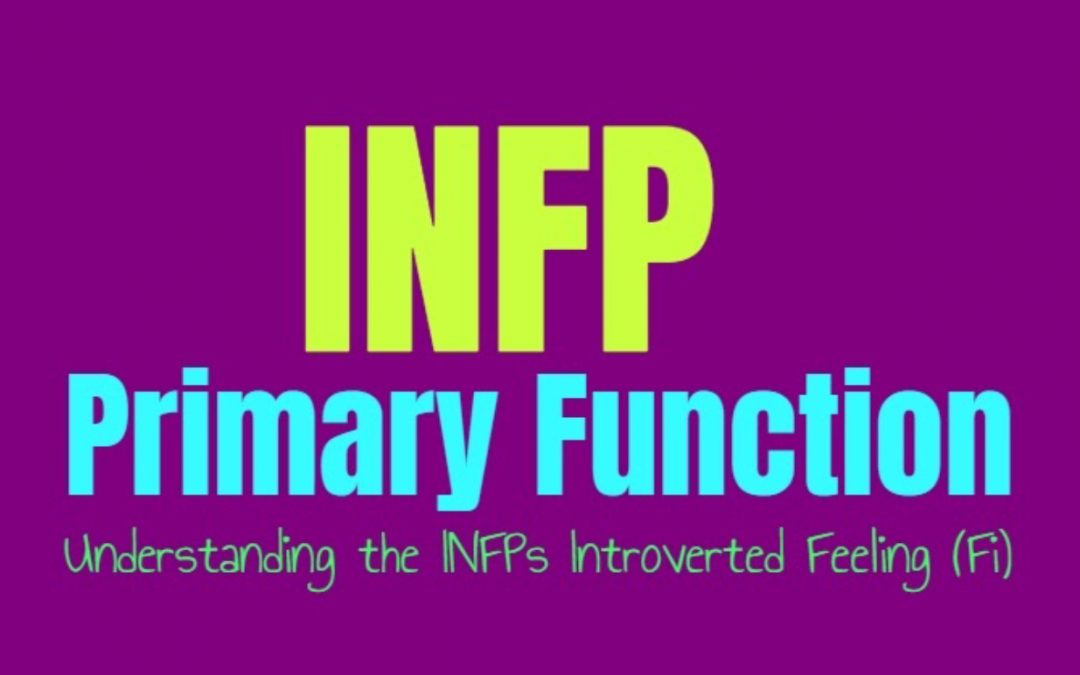 INFPs are definitely drawn to their dominant function and find the use of this to be an important part of who they are. Their dominant or primary function is their introverted feeling or Fi, and it is how they process the world and their sense of inner morals. This Fi is a big part of how the INFP behaves around others and also plays a major role in the choices they make. It can also be easily misunderstood by others, causing people to assume that since it is introverted feeling, the INFP must only focus on inner emotions and their own feelings. It is far more complex than this, which is why understanding it better is important if you want to understand the INFP.

Introverted Feeling (Fi) is a function which is focused on the users inner world and sense of inner morals. Fi is what creates this strong sense of right and wrong and helps the dominant user to become rather rooted in these beliefs. Someone who uses strong Fi is going to focus a lot of understanding themselves and what they feel is truly the right path to take. They want to be sure that they are following a sense of morals and not straying from this too much. When they do make mistakes they can actually be rather hard on themselves, wanting to find a way to make amends. They care deeply about doing what they feel is right and want to be sure that they are not going against these inner morals. While this is an introverted function, it is still very much connected to the world in the sense of caring for what state it is in. The Fi user might not gain those morals and beliefs outwardly, but they do want to be sure that they consider how their actions are affecting others. It is however, based on the person’s own internal sense of values, and is rarely something which can be affected by the outside world or social norms. Instead it is based on what the Fi user feels is right and what they know to be true in their hearts.

There are common misconceptions that Fi is simply a strong connection to inner feelings, but it goes much deeper than this. This is how the INFP/ISFPs make decisions, and how they help to understand the best choices to make for themselves and others. It is tied to their values and morals, causing them to strive to do what they believe to be good and right.

For the INFP their Fi really gives them a strong sense of self, and is what causes them to become more confident the more they rely on it. As they mature and start to work on developing their functions, the INFP learns to also trust in themselves more. Their introverted feeling function is rooted in their deep sense of morals, and also their sense of self and who they are. The INFP who becomes more comfortable with this function starts to understand themselves better, taking time to work through what they believe and what they truly want. This is what helps them become confident in their words and in their choices. They know what they are doing is right, because they have spent so much time diving into their emotions and beliefs in order to make these choices. Their Fi is not something which makes the INFP more emotional, nor does it make them overly focused on their personal feelings. It also helps them to be more sympathetic to the emotions of others, wanting to be someone who can care for and help them. INFPs use their Fi to be more moral, caring and compassionate people. This also makes them confident in who they are and is why they can be so loyal and dependable. They know what they want and this comes from taking the time to really understand themselves and their desires. Where others might struggle to make choices, the INFP inherently knows what is the right path.

The INFPs functions work together in order to help them make decisions and process the world around them. While INFPs might be dominant Fi users, they also combine this function with the use of their extraverted intuition. The INFPs Ne is what makes them appear to be dreamers, constantly curious about the world and the potential around them. Their Ne makes them friendly and sometimes playful people, who enjoy being able to explore different options and experiences. Their Ne is what helps them create patterns, connecting many different thoughts and beliefs until they come to a conclusion which is right for them. Combining this with their Fi helps the INFP to really develop those strong inner morals, giving them options and connections that they can properly work with. It takes in information from the outside world, but also filters through the INFPs own internal thoughts and beliefs. INFPs love to be able to explore possibilities and this is something which comes from their Ne. Without the combination of functions the INFPs wouldn’t be able to come to these conclusions, and would find themselves wrapped up in their own little world without being able to share their dreams and feelings with others.