How Respectful You Are, According To Your Personality Type 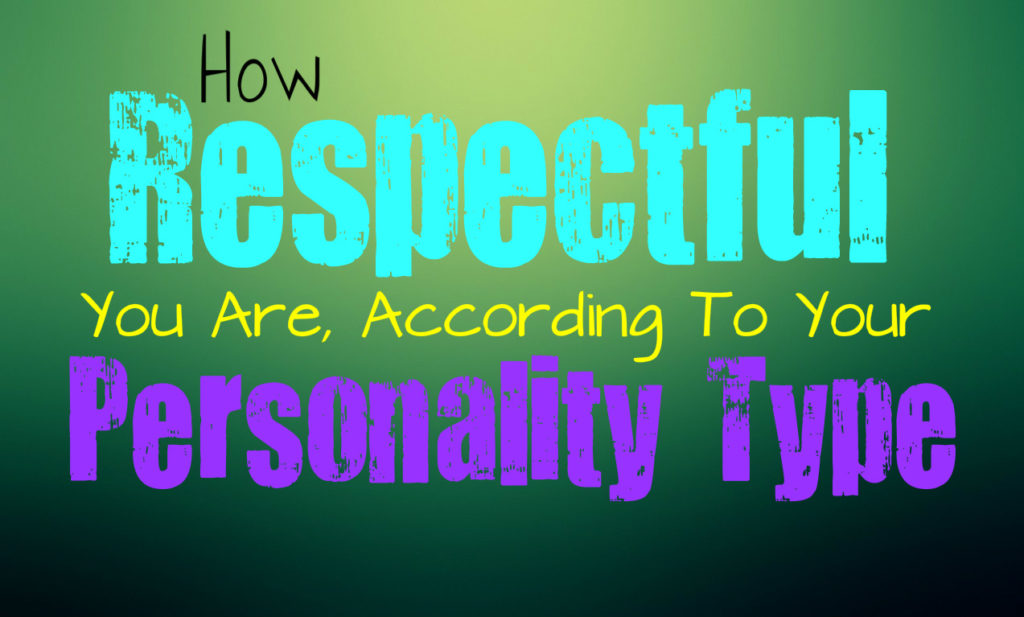 How Respectful You Are, According To Your Personality Type

The ability to show respect for others is something that comes naturally to some, but is a bit more challenging for others. Here is how respectful you are, according to your personality type.

INFJs are naturally respectful when it comes to the emotional needs of others. If they feel like someone doesn’t want their buttons pushed, the INFJ will often back off. They dislike making people feel uncomfortable, and do not want to invade other peoples space. They might have a tendency to try to help people, and sometimes it might appear to go too far. INFJs are very caring individuals, who enjoy being able to make a difference in the world around them. They do however, respect the needs and wants of others, and will take a step back if they feel it is necessary. INFJs sometimes struggle with putting up boundaries for other people, but they understand the need for space.

ENFJs are caring people, but sometimes struggle with expressing a certain level of respect. Their natural openness can make them say or do things that might bother others. Their intentions are only to help, but sometimes it seems a bit overbearing for others. Their constant need to please sometimes causes the ENFJ to push people too far, in an attempt to help them with their problems. Not everyone wants to be helped, but ENFJs might take this offensively and misunderstand other peoples need for space. They do not intend to be disrespectful, and truly only want to be supportive and helpful. Sometimes though, their nature can be a bit overwhelming for others- and this might come across as lacking respect.

INFPs are naturally considerate people, and they dislike crossing boundaries. They want to be sure that other people feel comfortable, which causes them to be conscious of what they say or do. INFPs do not want to be disrespectful, and find it very important to be sure that other people understand this. They sometimes appear to lack respect for people who they feel do not deserve their respect. INFPs simply give respect where it is due, and will only hold people to a certain regard if they deem them worthy of this. INFPs believe in doing what is right, and follow a rather strict moral compass at all times.

ENFPs care about how they impact others, and do not want to do anything to harm people. ENFPs try to be respectful, but it might take rather firm boundaries for them to completely follow rules set by others. They enjoy pushing buttons, which often causes them to cross certain lines that people dislike. This can cause the ENFP to appear rather disrespectful, but they simply enjoy pushing the limits. Crossing boundaries helps the ENFP understand themselves and others better, and is simply how they explore their world fully. They do not want to upset people, but sometimes their need to explore and take chances, causes them to be somewhat disrespectful. When it is something that truly matters though, they will certainly be able to hold themselves back.

INTJs are naturally respectful people, especially since they desire to be respected themselves. They do not want to cross boundaries that other people set, simply because they do not want to be rude or obnoxious. They are perfectly capable of respecting the people who show them respect. If someone is being rude though, INTJs are definitely going to lose respect for that person. When this happens the INTJ will often put that person in their place, and will express that they no longer feel the need to show them respect. They simply want to be given respect themselves, and so they will give it to people in return. They believe in boundaries and being considerate, because of this they will not cross lines that they should not.

ENTJs believe that respect is something that should be earned, and they work hard to gain the respect of others. They are constantly working on improving themselves, and they expect this from others as well. If someone is efficient and hard-working, then the ENTJ will definitely show this person respect. They strongly value efficiency, and want to be around people who are doing their best. They won’t simply respect someone with no reasoning, and only give this to people who have earned it.

INTPs often push people’s buttons in order to learn more about them, and what their boundaries actually are. They want to be respectful, but don’t always view things the same as other people do. What an INTP considers showing respect, other people might see it as being rude. They believe in being precise, so telling someone the complete truth is actually showing respect, as far as the INTP is concerned. Other people might become offended by the INTP, and in this case it appears like they are being disrespectful. It is mostly based on perception, because most of the time the INTP is actually showing respect.

ENTPs sincerely enjoy pushing buttons and crossing boundaries in order to understand people better. They also cross lines in order to understand themselves, and how far they are willing to go in any situation. ENTPs enjoy learning and discovering new things, which often requires them to step outside of their comfort zone. ENTPs do not intend to be disrespectful towards others, they simply do not believe in certain boundaries. They want to grow and to push others to grow as well, this often requires doing things that people might consider disrespectful.

ISFJs are introverted and caring people, who believe in being respectful. They do have moments where they cross certain lines when they feel like someone needs their help. They want to care for their loved ones, which can make them appear to lack boundaries. ISFJs are usually very respectful individuals though, and are good at following social rules of society. They know what is appropriate, and will usually go along with that rather easily.

ESFJs are very giving people, who are constantly tending to the emotional needs of their loved ones. They try to be as respectful as possible, and want to give people what they need. Sometimes ESFJs can appear to lack respect for boundaries, especially if they feel like their loved ones need their help. They simply want to care for people, and will usually show respect for peoples needs. ESFJs often know what is socially appropriate, and will follow the rules set out for them. In some cases though, the ESFJ will lack respect for someone who they believe has not earned that respect from them.

ISTJs believe in showing respect towards others, and will not cross lines that people set for them. ISTJs will respect people who respect them in return, without question. They do not believe in being rude, and dislike people who attempt to push others around. They will definitely not show respect to people who are rude or cruel to others though, since they do not believe that is fair. ISTJs know what is socially appropriate, and are good at following those rules. They do have a backbone though, and will stand up for what they believe is right.

ESTJs believe that respect is something to be earned, and it does not come naturally. They work very hard for the respect of those around them, and are constantly working to do their best. When people are inefficient or incapable, the ESTJ will not believe that they deserve their esteem. They will simply not show respect towards people who do not deserve it. They do however respect people who have worked hard for it, and will be happy to show that to others.

ISTPs enjoy keeping to themselves most of the time, and value respect very much. They want others to respect their need for privacy, and their right to make their own decisions. ISTPs will give this respect in return, and believe that things should be fair in that aspect. They do not stick their nose in others peoples business, and often prefer to allow people to make their own choices. They simply want that same respect in return, and want to be allowed to do as they please without being controlled by others.

ESTPs live very much in the present moment, and do not want to be considered disrespectful. They don’t want to do things that will upset others, but sometimes they have a hard time with boundaries. ESTPs care very much about their loved ones, and will often work hard to be respectful towards them. Sometimes they simply do not realize when they are crossing certain lines that will often others. ESTPs can say or do things that upset people, and this can be seen as a sign of disrespect.

ISFPs keep to themselves most of the time, and have a strong sense of inner morals. They want to do what is right, and believe that it is important to respect the needs and desires of other people. ISFPs follow their sense of morals in order to decide if someone deserves their respect or not. If someone is cruel and does not care for others, then the ISFP will not show that person their respect. People who are considerate and caring, they will gladly respect their needs and wishes.

ESFPs are fun-loving people, who enjoy living in the present moment. They dislike boundaries, but certainly do not want to do anything that is considered disrespectful. Sometimes they can say or do things in the moment that appear to cross certain lines. Their intentions are rarely to show disrespect, they simply do not take the time to consider their actions beforehand. ESFPs enjoy living in the present, and dislike when people attempt to suck the joy out of their lives.