How Sensitive Each Personality Type Is Most Likely To Be 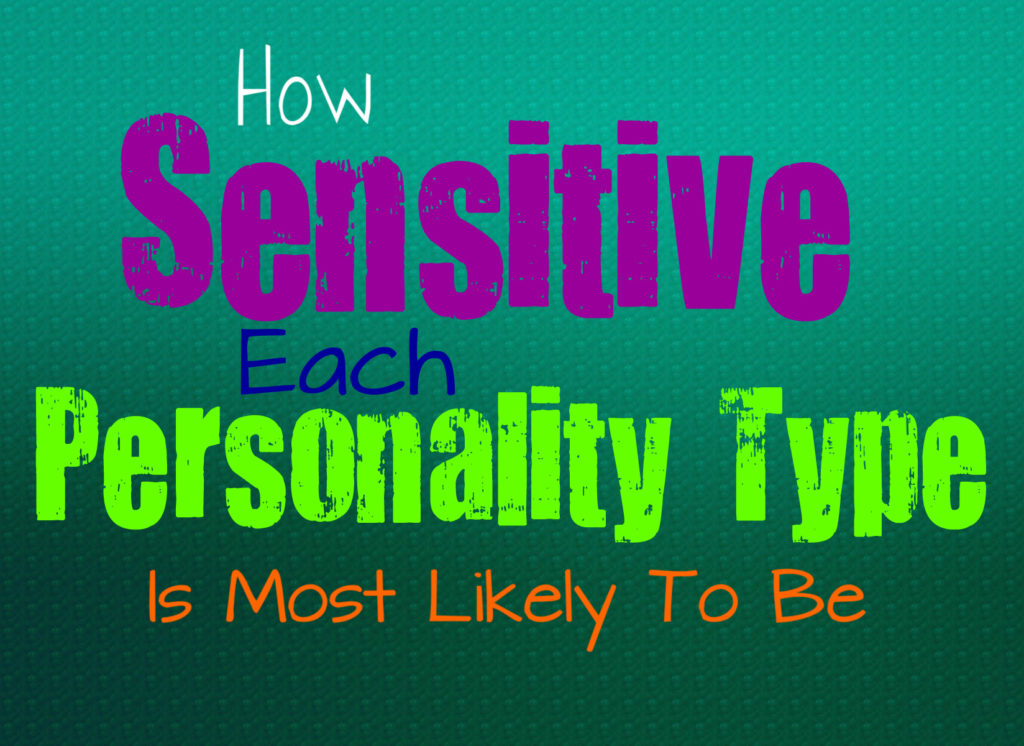 How Sensitive Each Personality Type Is Most Likely To Be

Everyone has certain things that they are sensitive about, but some people are more openly emotional than others. Here is how sensitive you are likely to be, based on your personality type.

INFJs are often very sensitive individuals, with a strong connection to the emotions of others. They are often acutely aware of the pain in the world around them, and want to do what they can to make a real difference. INFJs are connected to their emotions, but even more so they are connected to the emotions of other people. They cannot simply turn their back on someone who is hurting, and are often extremely sensitive to pain. INFJs will often find themselves saddened by the cruelty in the world around them, which can often cause them moments where they decide to become reclusive. INFJs are also very sensitive to the actions and words of their loved ones. They often will not be hurt by what a stranger says, but will be extremely affected by the people that they trust and hold dear.

ENFJs are very caring people, and because of this they can often be rather sensitive. ENFJs can often be impacted by the words of the people closest to them, and will become hurt if someone is cruel to them. They are usually very strong people, but at the same time they can be very sensitive. The fact that they care so deeply, makes it challenging for them to ignore the harmful things that people do and say. ENFJs also become very sad when other people get hurt, and will do whatever they can to protect them from harms way. They can be intense people when they are angry, but this is only because they are sensitive souls with big hearts.

INFPs tend to be sensitive people, simply because they have such big hearts. They have a depth of emotion inside of them, which is extremely powerful and sometimes overwhelming. INFPs care about the state of the world around them, and also care very deeply about others. They want to make a difference, and strive to do as much good as they can. INFPs are very warm people and try very hard to care for others. Their connection with their emotions and their compassion for others, often makes INFPs extremely sensitive people. Their sensitivities are not weaknesses, but in many ways they are what makes the INFP so strong and special.

ENFPs are enthusiastic and gentle souls, which often makes them rather sensitive. They are strong people, but do have a rather deep sea of emotions inside of them. They will often become easily hurt by the people that they love, and might become upset easily by their words. ENFPs are also great at moving part this hurt though, and will forgive rather quickly. ENFPs simply have big hearts and are constantly striving to connect with the world around them. Their sense of passion often makes them more sensitive than some other types, but it is also what makes them incredibly special.

INTJs are very logical individuals and enjoy focusing on knowledge more than emotions. INTJs can sometimes be seen as lacking sensitivities, but that is not true. INTJs are simply more focused on logical answers to problems, and tend to ignore their own emotional reactions. This can sometimes cause them to bottle up their emotions, until they ultimately surface in what can appear to be hyper-sensitive ways. INTJs are smart people, they simply do not understand the purpose of focusing strongly on feelings, when they see them as fleeting. If an INTJ holds someone to a high regard, they can often be very sensitive to that persons words and actions. They care deeply about the people they let into their lives, which is often why they are picky about who they let close to them.

ENTJs would never consider themselves to be sensitive people, and often become uncomfortable with emotional outbursts. They will often bottle up their feelings in an effort to focus on what is most important to them. ENTJs are strong and focused people, who are always striving to be more efficient and hard-working. They value people who can get things done to the best of their ability, and become extremely irritated when others allow their emotions to control them. ENTJs are not openly sensitive people, and rarely become upset by the words of others. They might become quickly angry if someone is not being efficient, which may cause them to snap on those people.

INTPs are people who favor logic over emotions, but that does not mean they do not possess a sensitive side. They often lack understanding of their own emotions, which can sometimes cause them to bottle up their feelings. INTPs prefer to search for a logical understanding of things, especially when it comes to emotions. Sometimes this desire to bottle things up can cause the INTP to become emotionally exhausted over time. They are often rather caring people when it comes to their loved ones, and can be sensitive to the things these people say or do. They will not openly express their sensitivities, but they are often very present and will cause the INTP to become frustrated.

ENTPs are outgoing and mentally active people, who are constantly striving to explore new ideas. They enjoy keeping their minds actively exploring, and dislike staying still for too long. ENTPs are rarely considered sensitive people, and will rarely become offended by the words or actions of others. They have an understanding that people make mistakes and will constantly do things that disappoint them. ENTPs usually do not let this upset them, unless it is someone very close to them. Someone that they care for very deeply can often impact the ENTP, even if they do not show it openly.

ISFJs are extremely caring people, which can often cause them to be more sensitive than others. They dislike seeing their loved ones hurt, and will become personally upset by this. ISFJs do whatever they can to help the people they care for, and work hard to keep them out of harms way. ISFJs can also become personally hurt by their loved ones rather easily, simply because they care for them so much. They aren’t normally seen as sensitive people, since they prefer to keep their composure in most situations. ISFJs are very sensitive to the emotions of others, and on some occasions can become easily hurt by the people closest to them.

ESFJs are not generally sensitive people, but can become easily hurt by their loved ones. They have a powerful sense of the emotions of others, which can cause them to become rather reactive to this. ESFJs can often sense when someone is upset, and can even become overwhelmed by this. They simply want to make the people around them happy, and often work very hard to accomplish this. Their caring for others can sometimes make them more sensitive. ESFJs will become easily hurt by the people closest to them, and might become upset by even the smallest comments. They work hard to care for their loved ones, and simply want to feel loved and appreciated by them.

ISTJs do not focus on emotions and prefer to focus on practical needs. They care very much for their loved ones though, and work hard to make sure they are provided for. ISTJs are not sensitive people, and will often ignore their own emotions for the sake of getting things done. They are not easily offended by others, and will often brush things off. ISTJs care about the people closest to them, but can cut those people out if they continue to abuse or hurt them. They are strong individuals, and are smart enough to understand the reasoning behind most of the actions of others.

ESTJs are very strong-willed and focused people, who tend to ignore their own emotions. They value efficiency and prefer to get things done. ESTJs often become uncomfortable when other people are being overly emotional, simply because they do not understand how to react to this. ESTJs know how to tend to the practical needs of their loved ones, but simply do not know how to help with emotional problems. Their can become sensitive when someone they care about says or does something to hurt them, but they will often react to this with anger. ESTJs dislike lacking control over their emotions, and will become very frustrated if someone triggers this.

ISTPs are very internally focused individuals, which often causes them to lack sensitivities in many situations. They are not sensitive to the emotions of others, and will often prefer logic over feelings. ISTPs are also rarely hurt or offended by people, and would prefer to be on their own most of the time. If they are in a situation where someone they care for is hurting them, then the ISTP will usually attempt to understand why this is happening. Instead of being reactive, they prefer to reach a deeper comprehension of the world around them.

ESTPs enjoy living in the moment and prefer to keep moving at all times. They are not overly emotional people, but they do react to the actions of their loved ones. ESTPs will often become easily hurt by the people closest to them, and will not understand why those people are being insensitive towards them. ESTPs are giving people, but can become emotionally reactive if they feel like others are not appreciating them.

ISFPs are emotionally sensitive individuals, simply because they are very reactive to the world around them. They care very deeply for others, and have a very strong sense of inner morals. ISFPs want to help people, and can become easily saddened by the cruelty in the world. They are also easily upset when someone they love does something to hurt them. They might not be sensitive to the words of just anyone, but will become upset if someone they love harms them in any way.

ESFPs are very caring people, who enjoy making their loved ones smile. They prefer to live in the present, which can sometimes make them rather emotionally reactive. ESFPs are often sensitive to the words and actions of others, and will become very hurt by what people say. If someone does not seem to like the ESFP, they will usually take this very personally. They do not enjoy being misunderstood, and simply want people to understand their true intentions.