How Often Do You Hide Your Pain From Others, According to Your Personality Type 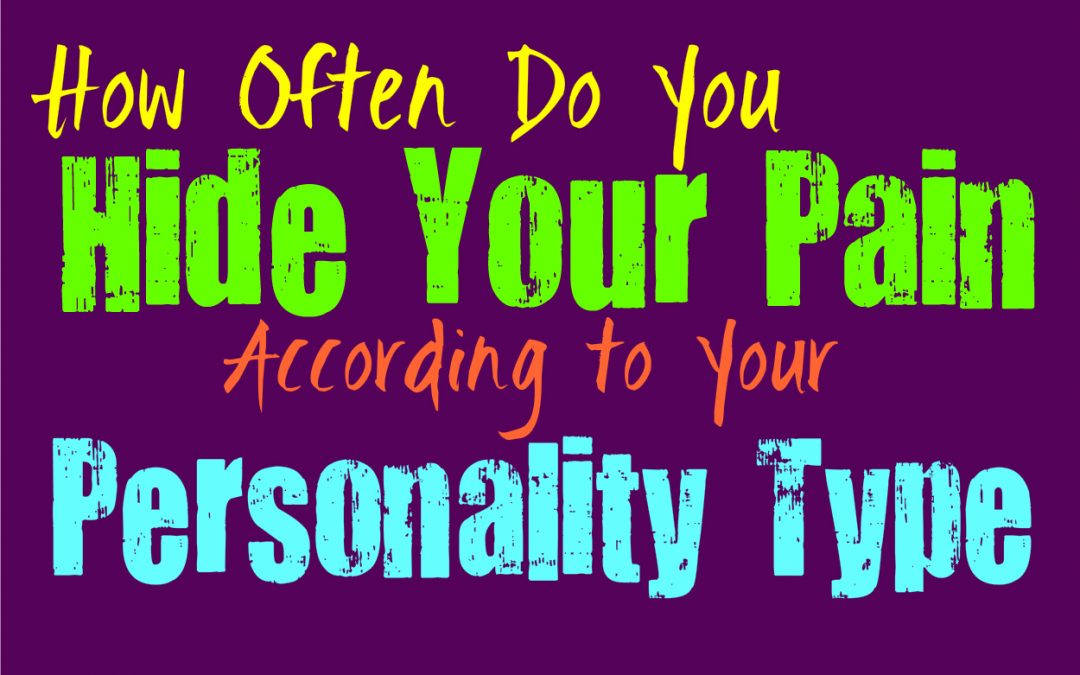 How Often Do You Hide Your Pain From Others, According to Your Personality Type

While some people feel the need to express their hurt so that they can move forward, others have a tendency to hide their pain. For some it seems easier to hide this pain and appear strong on the outside, than to feel vulnerable and express it to others. Here is how often you hide your pain, based on your personality type.

INFJs do have a tendency to hide their pain when they are around people who will not understand. They sometimes want to appear strong and impenetrable, and so they often hold a lot inside. When the INFJ is hurting they often want to have someone they can confide in, but it can be challenging to find someone they feel they can trust. When they do find someone special then the INFJ does want to be able to share their pain with this person. In most situations they can fear becoming a burden to others, and so they keep this inside.

ENFJs often hide their pain because they do not want to show any cracks or imperfections in themselves. They often want to appear strong and capable, and don’t like when people can see flaws. For them showing their pain will show that they are struggling with someone and might make them appear weak to others. ENFJs simply don’t want people to see them this way and so it can be hard for them to really expose themselves or share their pain. When the ENFJ is having a hard time with something they might attempt to bury it before actually sharing it with others.

INFPs don’t like hiding their pain or any of their feelings really, since this feels stifling and unnatural. They prefer to express themselves and often wear their hearts on their sleeve. For the INFP holding their pain inside is truly difficult and leaves them feeling exhausted and stressed. They need to share their feelings and make them known to someone who can at least sympathize with what they are going through. For the INFP feeling a sense of having to hide their pain is truly not something that they handle very well.

Most of the time ENFPs feel the need to share their feelings and don’t like having to hide their pain. If they have been hurt a lot and are a more guarded version of themselves, they might struggle to really open up. This is something that often hurts the ENFP, and they will need to find outlets of expressing themselves which might not be as healthy. Most ENFPs really don’t like having to hide their pain, and in most situations they really need to feel free to express themselves and their feelings so that they can let this out.

INTJs do often keep their pain or any emotions they feel inside and rarely feel comfortable sharing with others. For the INTJ it just isn’t natural to be open with people emotionally, or even with themselves. They are more focused on logic and reason, and so their feelings can become pushed to the side because of this. INTJs don’t feel comfortable sharing their pain with others, and so they often hide and even attempt to ignore it completely. This can be something that causes these negative emotions to fester over time, but being open just is not natural for the INTJ.

ENTJs don’t naturally express their emotions and so hiding their pain often comes more naturally for them. They prefer to focus on logic and practical things, and so emotions just don’t fit into the things they understand well. ENTJs often bury their feelings of pain or sadness, and so sometimes this neglect can cause those feelings to manifest in more negative ways. There are times when the ENTJ does want to share some of their hardships with others, but it has to be someone they trust completely and realize this person will not make them feel worse than they already to.

INTPs definitely hide their pain and their emotions, since they struggle to really understand them. For the INTP feeling too much emotionally pain can be something that makes them feel overwhelmed, and so they try to use logic to understand or reason away these feelings. Instead of really accepting their emotions or sharing them with others, INTPs tend to keep these things inside. They can often be fearful of how people will respond, and might struggle to really trust others enough to feel comfortable sharing with them.

ENTPs definitely hide their pain and their inner emotions, and often struggle to really express them outwardly to others. ENTPs mask their pain with humor and sarcasm most of the time, struggling to feel comfortable really opening up to others. For the ENTP these emotions just don’t feel easy to comprehend and so they often feel the need to push them aside or try to use logic to understand them. When this fails the ENTP often buries their pain, unless they can find someone who makes them feel safe enough to open up with.

ISTJs definitely hide their pain inside, since exposing it can feel a bit like weakness. For the ISTJ emotions aren’t something they easily understand and can often feel rather confused by them in general. They even struggle to understand and process their own feelings, and so when they are hurting they might want to bury it. For the ISTJ exposing their pain to others feels a bit too vulnerable and makes them feel fearful of what might occur. For them it is easier to keep these feelings inside, and even ignore them entirely.

ESTJs usually find it easier to hide their pain from others, and even bury it from themselves. They struggle to really process their emotions and showing their negative feelings can feel like a weakness. ESTJs don’t like feeling exposed and vulnerable, mostly because they struggle to really trust and rely on others. For the ESTJ sharing their pain with others is not something that feels natural or comfortable, and so it is easier for them to hide it.

While ISFJs are warm and caring people who love connecting with others, sharing their pain is not something that comes naturally. Even if the ISFJ is hurting and wants to open up, it can feel like they are burdening people too much. Showing their own pain often makes the ISFJ feel like they are letting others down in some ways. They want to remain strong and often because of this they will keep their pain inside and avoid sharing it with others.

ESFJs definitely hide their pain from others, mostly because they want to appear strong and dependable. They don’t like burdening their loved ones with their own inner pain, and so they often bury it inside. While ESFJs might want to connect with others and inside they might feel like it would be better to share their pain, they rarely find themselves opening up enough to really feel comfortable doing this. ESFJs simply don’t want to show weakness, and want to be someone who can protect those around them.

ISTPs do usually hide their pain, simply because opening up to others is not something that comes naturally for them. While they do hide their feelings because of this, they also do it somewhat unintentionally. ISTPs simply struggle to really understand their own feelings most of the time, and might have a hard time really recognizing them as well as some people. For the ISTP hiding their pain is often easier than expressing it to others or taking time to really understand it.

ESTPs do sometimes hide their pain from others, especially people who respond with a sense of judgement. ESTPs can be guarded people when they feel like expressing themselves will only receive some sort of negative response. Around someone they trust and care for the ESTP doesn’t like hiding their pain, and often expresses it openly. While they are seen as logical people, that doesn’t mean they lack deep emotions. ESTP often enjoy having someone they feel comfortable with and are itching to be able to really open up.

ISFPs don’t hide their pain, since this just isn’t something that comes naturally for them. They prefer to express themselves to others and enjoy having people they can connect with. It can be rather draining for the ISFP to hide their pain or emotions from those around then. They often wear their hearts on their sleeve, and so having to bottle things up can be truly miserable. For the ISFP it simply feels more natural to express themselves, and their pain is often seen openly.

ESFPs definitely do not hide their pain, since this feels completely unnatural for them. They express themselves rather openly to others and dislike feeling like they need to hide things. For the ESFP wearing their heart on their sleeve is a much more comfortable way of living. They don’t like feeling like they have to bottle things up, and will rarely be able to do this for very long. ESFPs want to be around people they feel comfortable sharing things with, even when it is their pain.