How Cheesy You Can Be, Based on Your Personality Type 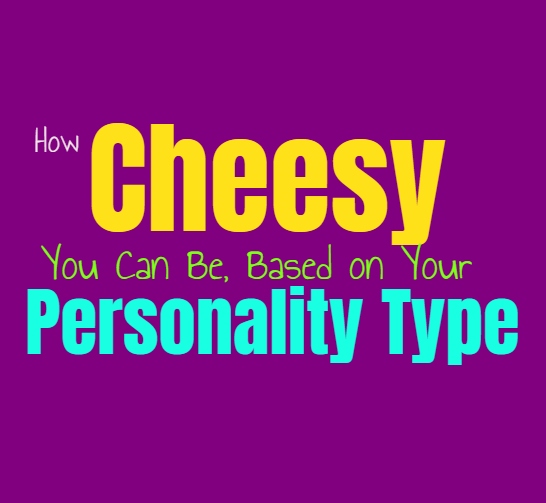 How Cheesy You Can Be, Based on Your Personality Type

For some people being cheesy is a bit embarrassing and not something they want to be seen as. For others things which are cheesy can be both warm and comforting. For some people cheesiness is a sign of being comfortable with who they are, for others it feels insincere. Here is how cheesy you can be, based on your personality type.

INFJ
INFJs don’t mind things which are a bit cheesy and even find themselves intrigued by these things. They can be a tad cheesy themselves, but they often only share this with their loved ones. For the INFJ things that seem cheesy can actually be comforting and bring a sense of joy. They don’t need to constantly feel “cool” or put on some sort of show for others. To the INFJ being cheesy can often be more sincere and honest than someone who is afraid of express themselves in sometimes corny ways.

ENFJs don’t mind a bit of cheese in their lives, and often feel like it is necessary. While they do their best to be perfect in some ways, that doesn’t mean they feel the need to constantly be seen as “cool”. They don’t mind cheesy things, especially if those things are warm and comforting. For the ENFJ there are plenty of guilty pleasure which they aren’t afraid of sharing with the people closest to them. Something being cheesy isn’t going to deter the ENFJ, and they don’t mind being cheesy themselves sometimes.

INFPs certainly don’t mind something being cheesy, and might even be drawn to these things. For the INFP all that matters is that they feel personally inspired by something and are more drawn towards depth and complexities. While being cheesy can sometimes be attached to something being foolish or insincere, INFPs don’t always see it this way. They often have a cheesy side to themselves, at least that is how others view it, but to them this is completely honest and is just them expressing their deeper emotions.

ENFPs don’t really mind being occasionally cheesy, even if others see it as a bad thing. For them it is fun to go with whatever they are drawn to, and sometimes things which are a bit over the top can be comforting for them. ENFPs don’t mind things being corny or cheesy, as long as they feel personally excited or entertained by it. They have a lot of strong inner emotions and so sometimes this can seem cheesy to others, but truly it is just them being sincere and opening up about their thoughts and feelings.

INTJs don’t usually enjoy things which are cheesy, since it just feels insincere to them. They don’t like things which are forced or over the top, and would rather avoid them entirely. For INTJs it is a bit draining to be around cheesy people or behavior, and they would much rather someone be direct and to the point. Even if someone is simply expressing sincere emotions it can feel cheesy to the INTJ, since being emotionally expressive is not something which comes naturally for them.

ENTJs aren’t usually drawn to cheesy behavior or movies, and might find them to be insincere. Things which are over the top or express too much blatant emotion, often feel a bit cheesy for the ENTJ. This is simply because they don’t find it easy or natural to express their own emotions and so these things seem a bit forced for them. ENTJs prefer to focus on things that are to the point and very direct, since this helps them to be more efficient and get the job done accordingly. ENTJs care about others but they often show this in more practical ways, and too much expression feels cheesy.

INTPs might not enjoy cheesy things outwardly, but deep down they can have a bit of a romantic heart. INTPs might appear cheesy to others when they sincerely express their emotions, and this is often a big reason why they avoid doing so. INTPs don’t want to seem cheesy, but sometimes the way they express themselves when they are trying to really show their feelings, can be a bit hard for others to really understand. For some people though this is a very appealing side to the INTP, especially those that understand where they are coming from.

ENTPs don’t usually find themselves drawn to over the top cheesiness, but they aren’t completely closed off to it. They enjoy experiencing new things and sometimes want to encounter different sides to themselves. The ENTP might enjoy exploring whether or not they can have a cheesy side, and so for a while they can be more interested in this. ENTPs simply aren’t great at expressing their emotions, and so they aren’t over the top with them. They might be cheesy in a more intentional and ironic sense though.

ISTJs don’t usually find themselves drawn to cheesines, mostly because they prefer things which are direct to the point. Someone who is overly expressive about their emotions often feels cheesy and a bit insincere to the ISTJ. They prefer to express themselves in more practical ways, instead of going over the top with their feelings. ISTJs don’t usually enjoy anything that is too over the top, but they might like the occasional cheesy movie.

ESTJs don’t mine some things which are cheesy, like movies or even music. For them it is more of a guilty pleasure to enjoy a film which is a bit on the cheesy side, especially if it connects to something person. While they don’t mind cheesier movies, ESTJ might become annoyed with people who are over the top when they express themselves. Someone who expresses their emotions in a dramatic manner often feels cheesy to the ESTJ and a bit insincere.

ISFJs don’t mind a bit of cheesiness when it comes to the movies they watch or even the books they read. For them this type of entertainment can be a bit of a guilty pleasure, and isn’t something that bothers them. They might be drawn to some things that seem cheesy to others, but they can often see the depth that others miss out on. This is something that causes the ISFJ to be misunderstood, since people might see them as occasionally cheesy but it is entirely sincere.

ESFJs don’t mind things which seem cheesy sometimes, especially when it comes to books or movies.They often have some guilty pleasures but they might keep these things to themselves. ESFJs can find themselves interested in things that others find cheesy, mostly because they see something there that other people might not recognize. For the ESFJ it isn’t really cheesy, they simply recognize the heart involved even if it seems over the top.

ISTPs aren’t really cheesy people and might find themselves veering away from anyone who behaves in a way that feels corny. When it comes to over the top expressions of emotion, the ISTP can often feel like this is a bit cheesy. Because of this they aren’t often drawn to movies or books with too much romance, since this feels sappy and like it is trying a bit too hard for the ISTPs tastes.

ESTPs aren’t usually cheesy people and often strive to be quite the opposite. They don’t want people to view them as corny or overly sentimental. While ESTPs might have a few guilty pleasures, they often keep these things to themselves. They simply don’t want people to view them as cheesy and become bothered if someone does. They are more focused on facts and can try to seem like they have a much harder shell than they actually do.

ISFPs don’t mind things which might appear cheesy to others, since to them there is something deeper that people might miss out on. ISFPs have strong inner emotions and sometimes the way they express themselves can appear cheesy to those around them. The ISFP really isn’t being as cheesy as they seem, they are simply expressing themselves in the most open way they can.

ESFPs can sometimes appear cheesy when they express themselves, but they are often being very sincere. They don’t mind things which seem cheesy to others, since they do have an over the top side to their personalities. ESFPs follow their hearts and go after whatever feels right for them, this sometimes leads them towards things other people don’t quite appreciate. While ESFPs might have a cheesy side, that doesn’t mean they aren’t sincere people.