Does a Fresh Start Appeal to You, Based on Your Personality Type 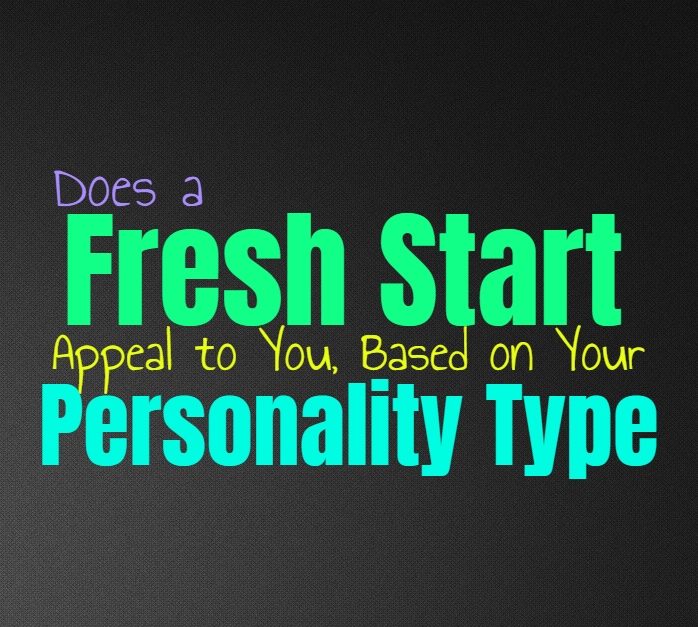 Does a Fresh Start Appeal to You, Based on Your Personality Type

Whenever the new year approaches people often discuss the idea of starting fresh and getting a chance to do things differently. For some people this notion of a fresh start is both exciting and appealing, for others this can feel like unnecessary pressure when they prefer to keep things the same as they have always been. Here is how you feel about a fresh start, based on your personality type.

INFJs can find the thought of starting fresh appealing in some ways, but actually doing this is a bit unnerving. They might enjoy the thought of starting fresh more in theory than they actually want to start over with their lives. INFJs can become more stuck in doing things a certain way, and can be nervous about really experiencing too much change all at once. They often fantasize about what it would be like to pick up and start fresh somewhere completely new, but feel afraid of actually making such a major step.

ENFJs can become comfortable with living their lives a certain way and aren’t really fans of too much change. For them the notion of a fresh start can be appealing, but actually starting over is a different story. They might be fearful of actually pushing themselves to a fresh start, since this means changing so much and even giving up on a place or certain people in their lives. For ENFJs it can be a bit of a daydream to consider going somewhere new and just finding a fresh start where no one really knows them, but this is often nothing more than a fantasy.

INFPs might be drawn to the idea of a fresh start, and enjoy fantasizing what it might be like. They might daydream about things like finding some new place to move to, just packing up and going without really telling anyone. INFPs like to have the chance to make changes in their lives, especially if they feel trapped for too long. They definitely find themselves drawn to the idea of a fresh start and might even find themselves wanting to completely change their lives one day. INFPs might be afraid of this idea but it doesn’t mean they won’t eventually feel the need to find a fresh start somewhere.

ENFPs often dislike stagnancy and find themselves wanting to seek out new and exciting experiences. They definitely find a strong appeal to the idea of a fresh start, and often want to be able to start over themselves. If the ENFP feels stuck or trapped in their current situation, they might find themselves fantasizing about a fresh start somewhere new. While ENFPs enjoy daydreaming about this notion, they also are likely to actually go through with it. For the ENFP it is important to live their lives without holding themselves back, and so they definitely are intrigued by a fresh start if they feel stuck in some ways.

INTJs enjoy having things a certain way, and would rather focus on building up the life they currently have. While INTJs have many goals and places they want to be, this doesn’t make them want to start fresh. INTJs would rather work on building something worthwhile, instead of just throwing things away to start over somewhere else. They don’t need to have some sort of fresh start in order to make their lives valuable, instead they want to do their best to get things right the first time around.

ENTJs often find themselves wanting to maintain their current lives, and believe in building up what they have. While ENTJs are goal-oriented people who always seek to improve, that doesn’t make them drawn to the idea of a fresh start. ENTJs would rather work on fixing any mistakes they have made, instead of just throwing things away to start over. They don’t believe in running from their problems and in most cases just want to get things right the first time around. For the ENTJ a fresh start usually isn’t that appealing, especially when they have responsibilities and things in which they value in their lives.

INTPs might actually find the idea of a fresh start rather appealing, since they dislike stagnancy or feeling trapped. If the INTP starts to feel like they are stuck in their current situation, then the idea of moving on and starting fresh really sounds appealing to them. INTPs are the type of people who can be rather spontaneous, wanting to pick up at random and just move somewhere else. They might take risks sometimes because of this, but they simply cannot live their lives feeling restrained or trapped.

ENTPs are definitely drawn to the idea of a fresh start, especially when they start to feel a bit trapped in their current situations. When the ENTP feels like their lives are becoming too stagnant, then they will want to find a way to shake things up. Sometimes this means starting fresh, possibly picking up and moving somewhere completely new. While this might be scary for some people, ENTPs enjoy the idea of taking risks in order to experience greater reward.

ISTJs can be unnerved by the idea of a fresh start, since they prefer to work on building what they have. ISTJs really aren’t fans of change, especially not starting over completely. For them a fresh start often feels like running away and abandoning their real responsibilities. ISTJs don’t mind when things being comfortable, instead they take pleasure in knowing what is around the corner. They try to prepare for everything and don’t like walking into the unknown. For the ISTJ it is more rewarding to appreciate what they have, rather than search for ways to gain a fresh start.

ESTJs aren’t fans of change and so the idea of a fresh start isn’t always appealing to them. They don’t mind getting a chance to make things right if they have made mistakes, but they often want to work on the life that they have. For the ESTJ it is more rewarding to find ways to improve what they have and work on building up a positive future. ESTJs don’t like just giving up on things and to them wanting a fresh start can feel a bit like a failure. If they are struggling ESTJs might fantasize about starting fresh, but rarely will they do this.

ISFJs don’t really like the idea of a fresh start, since this means leaving behind what they know and love. For the ISFJ it is more comforting to think of improving the life they have and working towards building a better and more rewarding future. For the ISFJ a fresh start can feel like giving up and just tossing out what they have for some new life. They can be nervous about the idea of change and rarely find it all that appealing.

ESFJs don’t often enjoy the idea of a fresh start, since it can feel like giving up. They prefer to focus on what they have and want to work towards building a better future for themselves and their loved ones. ESFJs can become uneasy with the idea of change and actually enjoy the things they are more comfortable with. For ESFJs staying in the same lifestyle isn’t upsetting, as long as they get the chance to improve things and make their loved ones happy.

ISTPs definitely find themselves intrigued by the idea of a fresh start, especially since they dislike stagnancy of any kind. When the ISTP feels trapped they want to find ways to escape this. They don’t like monotony in their lives and so the idea of a fresh start can certainly become appealing. If the ISTP is bored with their situation they aren’t afraid of finding a way to start fresh and will certainly jump into something new without hesitation.

ESTPs do often fantasize about a fresh start, especially when they are feeling stagnant. If they are unsatisfied with their current situation then the ESTP is certainly inclined to be drawn towards a fresh start. The idea of just picking up and moving somewhere new where they can be someone else and live a different life, is definitely something that calls to them. While ESTPs might not actually take action and start fresh, it is something they are capable of if it feels right.

ISFPs often dream about a fresh start and a chance to live a completely new and different life. They find themselves truly drawn to this idea, especially if they feel a bit unhappy with their current situation. The more the ISFP feels stagnant or unhappy, the more inclined they are to run away and start fresh somewhere else. They often dream about having someone rescue them from their mundane existence in order to find somewhere new.

ESFPs are not interested in anything boring or mundane and are often drawn to the idea of being able to have a fresh start. If they feel restrained or unhappy with their current situation the ESFP will certainly be eager to start over and find something more rewarding in their lives. ESFPs enjoy living their lives to the fullest and want to be able to jump into something new if they feel inspired. If they feel trapped the ESFP is more than willing to pick up and start fresh somewhere else.