The Way Each Personality Type Responds to Being Snowed In 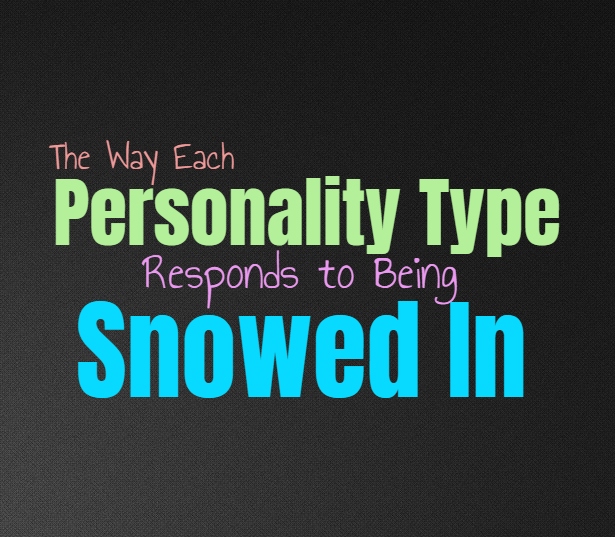 The Way Each Personality Type Responds to Being Snowed In

Some people hate the idea of being trapped in the house and the idea of a snow day isn’t all that appealing for them. They prefer to have the choice to go out and do things, instead of being stuck inside because of the snow. For others it isn’t quite as negative, and they respond differently to being snowed in. Here is how each personality type feels about being snowed in.

INFJs might actually enjoy the idea of being snowed in, since it gives them an excuse to do the things they enjoy. Not feeling obligated to interact with others or go out and do things they don’t actually want to do, is definitely rewarding for the INFJ. When they are snowed in they can spend time by themselves, catching up on some of their favorite things. The INFJ might enjoy reading, watching their favorite show, or any hobbies that they seem to miss out on because they are busy with their obligations. For the INFJ being snowed in might just be a dream come true, a chance to enjoy time to themselves.

ENFJs might enjoy the idea of being snowed in at first, especially if this happens with someone they love. If they are stuck inside without having to uphold certain responsibilities, the ENFJ will get a chance to relax for a change. They almost always find themselves with a million tasks they need to take care of and so having a chance to just relax and not worry about it for a short time can actually be nice. At first the idea of relaxing with someone they love can be romantic and exciting, but eventually it can cause the ENFJ to become a bit stir crazy if it goes on for too long.

INFPs might really enjoy the idea of being snowed in, giving them a chance to relax and be by themselves. They don’t always get the alone time they truly need, and feel obligated to be around others sometimes even when they are drained. Being snowed in gives the INFP a chance to curl up with a comfy blanket and a good book, or even sit down by a nice fire. These simple things are often what brings the INFP the most joy and comfort in their lives. A chance to just recharge their batteries and do some of their favorite things, is truly rewarding for them.

ENFPs are social and outgoing people who enjoy being able to experience new things. While they might feel cooped up being inside for too long, at first it might be exciting. Just the idea of being snowed in and not having to worry about work or responsibilities, can be really fun for a while. Being able to sit back and just enjoy some of their favorites things can be a great way for the ENFP to recharge. They like to sit around sometimes playing video games or just reading a good book. They often find ways to entertain themselves, especially if they are snowed in with someone special.

INTJs might enjoy the idea of being snowed in at first, since it gives them a chance to avoid people. INTJs can sometimes push themselves too hard in order to get things done, and this takes away from time they can spend doing their own thing. If they are snowed in the INTJ can spend time by themselves and avoid others entirely if they want to. They might spend time reading a few books, or working on a personal project. INTJs do enjoy being on their own and having time to do whatever they please. While they might enjoy this for a while, eventually it might leave them feeling a bit trapped.

ENTJs might not like being snowed in because they will likely feel a bit trapped. They often have so many things they need to get done, and don’t like feeling like they can’t. If they are stuck in the house it can leave them feeling antsy and like they don’t have enough that they can do. They might find themselves working on some personal projects though, and that can be rewarding for them. ENTJs do best if they are snowed in with someone they care for, and this can be a bit more fun.

INTPs don’t usually mind the idea of being snowed in, since it gives them time away from others. Being stuck inside gives the INTP a chance to focus on their own things, and to spend some time recharging their batteries.For the INTP it is rewarding to spend time doing their own things without having to focus on obligations that they don’t really like having to take care of. They will spend this time either reading or just working on a project of their own. After a while this might cause the INTP to feel a bit stir crazy though, since they do like being able to experience new things.

ENTPs might not mind being snowed in with someone they love, and enjoy spending time with these people in this type of situation. While they might enjoy the idea of being snowed in for a short while, but if this really happens they can feel trapped. ENTPs don’t like being stagnant for too long and being forced to do the same things over and over again can be truly stifling for them. Being snowed in is likely something that they would find fun at first, but after a while it would lose the excitement and become boring.

ISTJs might enjoy the idea of being snowed in at first, since it gives them a chance to be alone. ISTJs work hard and so because of this they don’t always get a lot of time to themselves. Having this time to just do whatever they please without being around others, can be a chance for them to recharge. This is something that they might enjoy at first, but after a while they might feel a bit trapped. Feeling stuck in the same position for too long without a chance to get things done and do what is important to them, the ISTJ will feel a bit anxious.

ESTJs might become anxious if they are snowed in for too long, since they feel stuck. They want to do their best to get things done and so not being able to is going to leave them feeling held back. They often have so many things which are important to them, the ESTJ wants to get these things done and so being stuck inside is going to hinder them in some ways. They will likely think through all of the things they should be out doing, but yet they can’t actually do them and this can cause them some stress.

ESFJs enjoy being able to spend time with their loved ones, and so being snowed in with them might be fun for a little while. Just being able to relax with their favorite people without having to focus on all of their constant obligations. ESFJs can overwhelm themselves with too many projects and so being snowed in is a great excuse to just take a few days off. For the ESFJ it can often be more rewarding for them to spend time with these people just relaxing, but after a while it might be draining.

ISTPs might not mind being snowed in at first but after a while this can feel a bit draining. They don’t like feeling trapped or cooped up in the same place for too long. ISTPs don’t like feeling stuck inside and so they likely need a chance to get out and experience something new. When the ISTP gets snowed in they are likely to become impatient and want to find a way to get outside and so something different.

ESTPs night not mind being snowed in for a short time, since the chance to take a break from work and responsibilities can be enjoyable. At first the change and excitement is thrilling for the ESTP but after a while it can actually become draining. They need to be able to get out and experience new things and they certainly don’t like feeling trapped. Not being able to change their scenery is actually difficult for the ESTP, especially if it lasts for days.

ISFPs might romanticize the idea of being snowed in with someone they are in love with. The chance to just sit inside cuddled up with a blanket, talking and playing games, is truly exciting for them. They are romantics at heart and enjoy the idea of getting to spend quality time with someone special. While this is likely rewarding st first, after a while it can be a bit draining not being able to change their scenery.

ESFPs don’t like the idea of being trapped in one place and so after a while being snowed in can be frustrating. At first it might be fun but this is more in theory than in actuality. Being stuck without too much to do and a chance to get outside, is going to be something that leaves the ESFP feeling edgy. They will try to make the most of it though and want to have a good time with anyone they are stuck inside with.