Are You Capable of Handling Work Meetings, Based on Your Personality Type 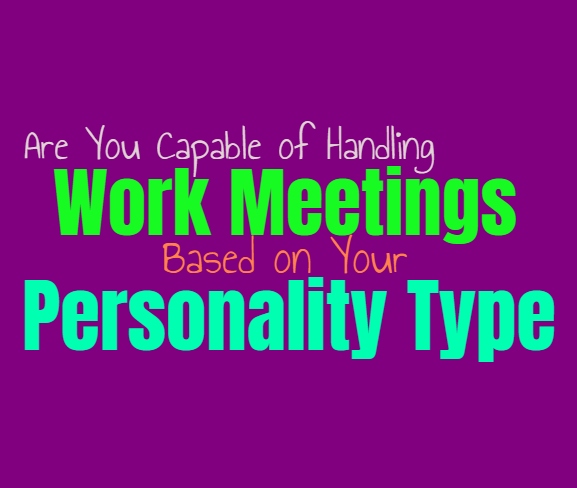 Are You Capable of Handling Work Meetings, Based on Your Personality Type

Most people need to endure meetings, even if they are simply group meetings at their workplace. For some this is an easy task and something they handle very well, for others it is both draining and a bit stressful at times. Here is how you handle meetings, based on your personality type.

INFJs might be hesitant when it comes to work meetings, especially ones where they just need to sit there and listen to someone talk. They might find themselves zoning out, losing track of the actual meeting. INFJs don’t like feeling cooped up in a room where they have to listen to someone ramble on about information they probably don’t need to know. They do their best to pay attention when it is important, but INFJs usually aren’t fans of meetings in general. This type of environment isn’t often the most rewarding for the INFJ, and so even the smallest of things like this can be draining and feel monotonous.

ENFJs often enjoy meetings since it gives them a chance to touch base with everyone. They are good at being social people and know how to command a room if need be. If they are the ones having to call a meeting the ENFJ can often do this and give a perfect presentation in order to get things moving. They aren’t afraid of being around others and might even enjoy being able to work as a team on certain things. Meetings can be a good way for the ENFJ to show of their skills and connect with others in order to understand how to move forward.

For the INFP meetings in the workplace often feel like an exhausting obligation. They aren’t fans of feeling forced into these situations, and often feel overly drained by it. INFPs find themselves a bit drained by having to sit around with a group of coworkers and pretend to be completely focused on the subject at hand. Unless the meeting is about something the INFP feels passionate and inspired by, they will find themselves a bit stuck. They become drained with too much social interaction, especially the forced kind.

ENFPs become bored rather easily and so most of the time work meetings are going to be a bit draining for them. They might find their minds wandering off somewhere else, and they will try their best to remain focused. When the ENFPs knows they are obligated to attend a meeting it becomes even more exhausting for them. They would rather focus on doing their own things and don’t like feeling as if they are being hovered over. Having to sit in a meeting and actually participate can be a bit exhausting, unless it is about something they are passionate about. In this case ENFPs are great at chiming in and coming up with creative ideas.

INTJs often enjoy work meetings when they get a chance to give their input and improve the situation. INTJs are very focused on efficiency and believe in doing their best to learn and improve. Meetings can be a good setting for them to make their presence known and express how they think things should be done. INTJs aren’t afraid of socializing or interacting with people, they simply become drained with it after a while. They are often good at being direct and precise, and will do what they can to make the meeting more efficient and bring everyone onto the same page.

ENTJs often enjoy work meetings when they get a chance to focus on projects which are important to them. They are focused and driven people who believe in always being as efficient as possible. When it comes to work meetings the ENTJs knows how to take charge and is often good at being the one running these situations. They aren’t afraid of taking control in order to help everyone become more efficient and bring them all together onto the same page.

INTPs might become exhausted by the idea of work meetings, especially about things they don’t find that inspiring. When they are brought into a meeting for a project or subject which they are excited about, the INTP will enjoy being able to give their insights and work with other like-minded people. When it comes to work meetings which feel like obligations, the INTP isn’t going to be all that intrigued by this type of situation. They might find themselves feeling painfully bored and will find their minds wandering elsewhere.

ENTPs might not mind certain work meetings, especially if they get to discuss things they are passionate about. If the ENTP is excited about the subject at hand then they are be truly eager and useful in these meetings. They will do their best to inspire others and bring the group together in order to understand what they are discussing. ENTPs are great at coming with with creative ideas and this is often helpful in these types of meetings. If they are forced into a meeting which simply feels like an obligation, then the ENTP will have a hard time participating.

ISTJs don’t usually mind work or business meetings and will do their best to participate properly. They are hardworking people who try to remain focused on what is important to them. They don’t like feeling like they are falling behind and so they will try hard to become a valuable part of any meeting or work setting. They will remain focused and do their best in meetings, even if they are feeling drained and don’t really want to be there. ISTJs are the type of people who take care of their duties, even if they don’t really want to.

ESTJs are often great in work meetings and do their best to participate when they should. They are focused people who work hard to get things done and believe in always being as efficient as possible. For the ESTJ meetings are often an important setting to showcase their skills and intelligence, and to help the group improve. For the ESTJ meetings are not a place to slack off, instead they believe in pushing themselves to impress those around them.

ISFJs don’t mind work meetings, but they might be stressful for them sometimes. ISFJs can feel a lot of pressure to be successful and to do things properly. When it comes to the workplace they want to be seen as someone who is capable and impressive, and so they do their best to live up to these high standards they place on themselves. Work meetings are important for the ISFJ, since they want to be able to do their best and maintain useful ideas and contributions.

ESFJs are often good at handling work meetings, since they are both friendly and hardworking. In these situations they do their best to provide useful contributions to the meeting, and know how to step back when they should. ESFJs believe in working hard and trying to live up to their own high expectations, especially in the workplace. When the ESFJ is called into a meeting they will certainly be good at getting things done and will know how to bring the group together with ease.

ISTPs aren’t really fans of anything which feels mandatory or stuffy. If they are forced into some sort of business or work meeting where they don’t want to be, the ISTP will certainly not enjoy this. They might find themselves easily distracted, their minds wandering somewhere completely different. They don’t enjoy anything which attempts to control them and so these types of jobs aren’t usually all that fulfilling for the ISTP, they need space and freedom to feel happy.

ESTPs don’t usually enjoy feeling rushed into a work meeting, mostly because they want to focus on getting things done. They will especially become drained by a meeting that runs long and just goes over the same boring subjects which they already know in detail. ESTPs would rather be able to focus on their work instead of having to listen to someone else blather on about something they don’t need to know. ESTPs can participate well in meetings, but that doesn’t mean they enjoy them.

ISFPs don’t usually like being dragged into mandatory meetings, and this feels really draining for them. ISFPs prefer to have some freedom and space to make their own choices. When they have to sit in on certain work meetings which feel a bit pointless, the ISFP will likely find themselves distracted and thinking about other things. Meetings aren’t really their strongest skills, mostly because they prefer to have more freedom and space to think of things without this type of pressure.

ESFPs are often great at work meetings since they are friendly and outgoing people. They also aren’t afraid of having to give the presentations and often feel rather comfortable in these scenarios. ESFPs enjoy being around other people and are truly outgoing and social individuals. For them it really isn’t draining to have to be around others and so work meetings can often go fairly smoothly for the ESFP.