How Do You Cope with Getting Fired, Based on Your Personality Type 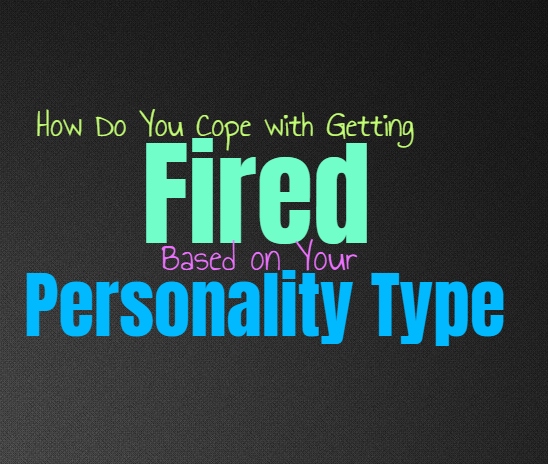 How Do You Cope with Getting Fired, Based on Your Personality Type

There are some types that are statistically less likely to be fired from their job, but that doesn’t mean it can’t happen to everyone. While some people simply try to move on and take life as it comes, others can become deeply bothered when they are let go from their job, and might feel like failures because of it. Here is how you are likely to respond to being fired, based on your personality type.

INFJs will certainly take getting fired very personally, and this will likely send them into a bit of a hole for a while. Even if the INFJ doesn’t feel personally inspired by their job, getting fired can be quite the blow. They don’t like to seem like failures, especially at something they feel they should be able to do well. Sometimes the reason the INFJ will get fired is because they weren’t really connected to their job, and felt themselves distracted because of lack of passion. While they might have valid reasons for this occurring, INFJs still struggling to really accept this and will certainly blame themselves.

ENFJs will certainly have a hard time coping if they are fired from their job, especially since they are perfectionists. When something doesn’t go as the ENFJ plans, it can leave them feeling a bit down on themselves. They set very high standards and don’t like doing anything which might end up in failure. Because of this ENFJs have a hard time really accepting when they have been fired, and will internalize this situation. They will try to figure out exactly what went wrong and what they can do to make it better or improve. If the ENFJ can’t seem to fix the problem then they will simply try to move on and find a better job.

INFPs can be harder on themselves than people realize, and at first will feel bad about getting fired. While they might be hard on themselves INFPs like to assess the situation depending on their personal attachment to the job. If they were miserable in their position this will often makes things a bit easier on the INFP, since they can analyze and often realize that this is the reason they were fired. They don’t like feeling trapped in a job that they hate, and because of this getting fired can actually be a bit of a blessing for them. If they were attached to the job the INFP is likely to take this harshly, and will have a hard time really coping with the loss.

ENFPs don’t like feeling like they have failed at something, and usually try to avoid getting fired. Instead if the ENFP feels like their job is going downhill and they just aren’t happy, they will quit and move on. ENFPs aren’t afraid of making changes in their lives and will simply take getting fired as a chance to go get a new job and just move on from the situation. ENFPs do sometimes struggle with the failure, but they do their best to move on and don’t like dwelling on the negative things in life.

INTJs certainly don’t accept being fired all that well, since they don’t like failure. INTJs do their best with everything they do, and so getting fired is actually very rare for them. If it does happen they are likely to try and analyze the situation and figure out logically why it occurred. INTJs don’t like just accepting things, instead they want to understand each situation and the ways they can improve in the future. For INTJs being fired can feel like a serious failure and isn’t something they will be happy with. It can force them into a very focused mode of trying to better themselves and fix whatever mistake might have caused this to happen.

ENTJs don’t accept failure that easily and can become truly frustrated if they are fired. They work hard to be impressive and successful in everything they do, constantly striving for a higher level of efficiency in their lives. If the ENTJ is fired it can be truly upsetting for them, and causes them to feel like they have failed at something important. They will do their best to learn from the situation and move forward, not wanting to allow this situation to harm them any further. ENTJs are focused people, and so they try to overcome failure, even though it might be challenging for them at first.

INTPs might take being fired rather harshly, but this might not show outwardly to others. They can often behave as if they are fine with the situation, and go straight to working towards finding a better job. Deep down INTPs have a hard time with this type failure, and can actually judge themselves harshly. They will analyze again and again trying to figure out what they did wrong or why they failed at something. INTPs can sometimes feel misunderstood and might ultimately decide that this is why they were fired.

ENTPs will do their best to overcome getting fired, although at first they might analyze the situation and try to figure out what exactly went wrong. They strive to understand the world around them and work hard to learn and grow. If the ENTP is fired they will try to understand why this happened at first, but might eventually move on and search for something new. They aren’t afraid of change and so they do their best to take this as a learning experience and search for a job which might be more fitting for them.

ISTJs don’t accept failure easily at all, and so they will certainly have a hard time dealing with being fired. ISTJs work hard to be providers and don’t want to let their loved ones down. For the ISTJ being fired will feel like a massive failure, and can leave them feeling very down on themselves. They might find themselves sulking in the disappointment for a while, but most ISTJs would rather bury themselves in trying to find another job. They will work hard to find a way to overcome this struggle, not wanting to disappoint those around them.

ESTJs don’t like feeling like they have failed and so getting fired is not easy for them to cope with. The ESTJ is likely to try and find a better job rather quickly, rushing to put out applications and figure out a way to fix this problem. They are natural providers and feel like they have sincerely let others down if they cannot provide for them. Getting fired is likely to hit the ESTJs pride rather hard, but they often do their best to overcome this and try to figure out a way to problem solve.

ISFJs don’t like feeling as if they have failed, and often strive for some level of perfection in their lives. If the ISFJ makes a mistake and somehow gets fired, they will take this very hard and might sulk for a while. They don’t want to let others down though and so most of the time the ISFJ will rush to try and find another job as quickly as they can. While they will try to overcome this in a more practical sense, it doesn’t make the experience any easier on the ISFJ. They often internalize this shame and feel like they have failed immensely, and so they often need a loved ones to help them through it.

ESFJs definitely don’t handle any kind of failure that well, and struggle to cope with the negative feelings they experience. ESFJs are perfectionists and so if they are fired it causes them to feel like they have let everyone down. They want to be able to provide for their loved ones and strive to be the person who can take care of them. Getting fired leaves the ESFJ feeling like they have failed and they might be afraid of how others will respond to this.

ISTPs certainly won’t be happy about getting fired, but they often try to live their lives in the moment. If something goes wrong they don’t want to dwell on this, instead they want to problem solve and move forward. The ISTP is likely to search for ways to overcome this struggle and begin searching for a new job. They might even enjoy some time off if they can handle it financially. ISTPs might not be proud of getting fired, but they rarely take it all that personally.

ESTPs can be hard on themselves when it comes to the workplace, and so getting fired can be something they struggle with. They often seek to impress their loved ones and if they are fired it feels like they are failing at this task. For the ESTP getting fired is more a blow to their personal pride and ego, and this is why it bothers them so deeply. They will likely try to make excuses, not wanting others to feel like it was their fault. ESTPs don’t want to take the blame for things like this, instead they want to find another job which will actually appreciate their skills.

ISFPs often take getting fired in stride, and will begin searching for a new job. They can be a bit flighty in the workplace, simply because they become bored so easily. ISFPs might find themselves wanting to move on well before they get fired, and so it feels like less of a big deal to them because of this. As long as the ISFP has a strong support system and people who won’t judge them for getting fired, then they can often cope with it much better.

ESFPs might not be happy about getting fired, but they try not to let these things weigh on them too heavily. The ESFP will likely move on from this situation and begin searching for their next path in life. For them it is important to focus on the positive things in life, and they are rarely that afraid of change. ESFPs take life from moment to moment, instead of stressing about what might happen in the future.