What it Means to be an ISTP Female 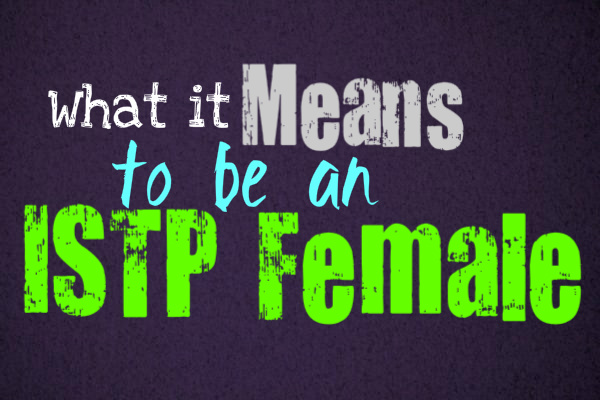 What it Means to be an ISTP Female

ISTP females are actually an extremely uncommon personality type. They are pragmatic and logical, but also calm and nonjudgmental. They have a relaxed personality which often causes people to find them extremely intriguing. Here are just a few important bits of information about the ISTP female.

You won’t find the ISTP woman waiting for someone else to come to her aid. She is strong and independent, with a knack for problem solving. ISTP women know how to get things done, and they use logic and practical thinking skills to do this. They don’t depend on other people to help them through their struggles, but would prefer to do most things on their own. They don’t do this in order to “feel” strong, but simply feel more comfortable handling things themselves. They have a natural intelligence, and are excellent at thinking things through in a logical manner. They don’t approach things with an emotional or personal connection- instead the ISTP female internally analyzes a situation in order to logically come to a conclusion.

Their independence is what makes them stand out to others, especially since they have a strong desire to be alone. Being that they are introverted, they require plenty of time by themselves in order to recharge. ISTPs often lean far on the introverted spectrum, and require plenty of time away from others. They need to be able to work through their thoughts, and dislike having too many distractions during this process. This desire to be alone, can often appear odd to others- especially when it comes to the ISTP female. In many cases people “expect” women to be social and open creatures- the ISTP woman simply does not fit into this description. The ISTP woman prefers to do things on her own, without feeling like other people are looking over their shoulder.

They Need Their Freedom

ISTPs love to explore and often take on exciting new adventures. They dislike being held down, and prefer to take risks. ISTP women are often seen as spirited and wild during their younger years. They enjoy being able to break the rules, and dislike feeling like someone is holding them back. They want to explore the possibilities in the world around them, and will often buck against someone telling them they can’t do something. ISTP women are free spirits, and prefer to take chances that might frighten other people. They do this because they want life to be exciting and filled with passion. Not only are they logical people, they are often very adventurous as well.  They believe that jumping into things, is the absolute best way to learn more about themselves and the situation. They are rarely afraid of trying something new, and have a calm and collected demeanor during things that would terrify most people.

ISTP females don’t always follow social norms, and often break tradition. They are intelligent people, and can become aware of what the “appropriate” response is- they simply prefer to be true to themselves. They dislike being insincere, and because of this they can be misunderstood. They would prefer to approach something their own way, without feeling like they have to follow some sort of social rules. ISTPs will take on a new challenge, but will often do so in a calm and collected way. While some people would expect a much more emotional reaction from the ISTP woman, she is often relaxed and ready to take on anything.

The stereotypical idea of woman, is that they are nurturing and emotional- but the ISTP woman does not generally fit into this description. ISTP women do have a nurturing side to their personality, it just only comes out for very special people in their lives. They are naturally stoic individuals, who do not openly express their emotions in front of others. Their main focus is to be logical and pragmatic, they generally do not focus on their own feelings. ISTPs try to be considerate of other people though, and are often nonjudgmental and polite. They simply prefer to focus their energy on understanding things in a logical way, and do not approach things with an emotional viewpoint.

Their lack of emotional approach can often be misunderstood by others. People can view the ISTP female as being cold or unfeeling- but this is entirely untrue. The ISTP female simply prefers to focus her energies on understanding things- she is logical and strong-willed. ISTP women understand that emotions can cloud your judgment and give you a rather skewed view of things. They do not naturally connect with their own emotions, and can sometimes become uncomfortable if they are forced to dive deep into their own feelings. This is something they need time to develop and become more comfortable with. ISTPs do feel things very deeply, but it is not easy for them to bring those emotions into full view.

They Focus On Unique Career Paths

ISTP women often go after male populated careers- which can be a bit difficult for them at first. They are a combination of logical and physical- which causes them to focus on careers in science, mechanics, engineering, or even entrepreneurship. Regardless of their specific career choices, ISTP females often find themselves surrounded by men in the workplace. At first this can be a struggle to prove themselves, and will create many hurdles for them to overcome. The great things about the ISTP woman, is that she is rarely afraid to take on a challenge. Oftentimes seeing the struggles ahead of the ISTP, will cause them to become excited to take on this new task. They will be more than willing to prove themselves, which ultimately leads to great things. They often end up impressing the people around them, because they are more than capable individuals.

The ISTP woman is certainly a rare breed, but her unique abilities also make her stand out. There are many hurdles for an ISTP female to overcome, especially being so different from the norm. The great news is that they are equipped with the proper skillset to conquer just about anything that comes at them. Their logical minds, their confidence, and their strength- will help the ISTP woman to accomplish whatever goal they set for themselves.

Here’s Why ISTPs Might Just Be The Coolest Personality Type