Would You Make a Good Supervisor, Based on Your Personality Type 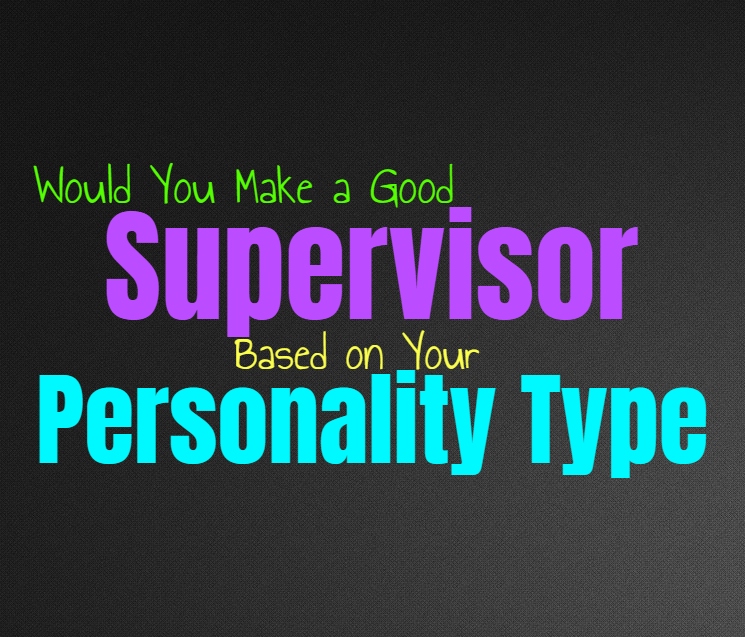 Would You Make a Good Supervisor, Based on Your Personality Type

Some people make for great supervisors, since they can oversee others and do their best to maintain a sense of order. These people aren’t afraid of taking charge, but also aren’t going to make others feel contempt for them. They know how to balance both of these things, which makes them good at their jobs. Here is how you would handle being a supervisor, based on your personality type.

INFJs aren’t really fans of being supervisors, and might avoid being promoted or moving up to this position. This isn’t because they are incapable of handling it, they just might not find themselves wanting to deal with this type of authority. INFJs are often good at observing others and figuring out what they need in order to improve. For the INFJ the biggest trouble is having to command others and it can feel like more pressure than they are really comfortable with.

ENFJs can make for great supervisors, since they are both friendly and good at being in leadership roles. ENFJs know how to observe people and pay attention to their habits and needs. They do their best to be someone that others can come to, and believe in trying to make them feel comfortable. While ENFJs are good at being a beloved manager or supervisor, they are also capable of cracking down when people aren’t working hard or showing proper respect.

INFPs are not usually fans of being supervisors, since this type of position can feel like too much stress and pressure. Having to command others and constantly pay attention to their actions, feels a bit too controlling for their liking. They really enjoy being able to give people space and a sense of creative room. While INFPs might make good supervisors in many ways, it becomes challenging when they need to order others around.

For ENFPs the struggle of supervising others is having to have a commanding or bossy presence. They prefer to give people space to be themselves and do their own things. They also aren’t the most organized people and dislike having to maintain things in such a strict manner. ENFPs are often capable of figuring out new things though, and their creative and friendly nature is certainly something that could aid them in this position.

INTJs are good at supervising others, and might be great in these positions. They are good at observing and seeing where things could be more efficient, and they aren’t afraid of taking control. INTJs are best when they can take a step back, and don’t have to be constantly interacting with people. They are good in supervisor positions since they do have some time to simply observe and take care of their own work when need be.

ENTJs often make for excellent supervisors, and do well in just about any leadership role. They enjoy being able to take charge and finds ways to improve the workplace around them. ENTJs aren’t afraid of being a bit bossy, but they also know how to bring together a team of people. They want to be sure everyone is happy, since they are aware that this helps them become more efficient at their jobs. They use their outgoing personalities, and try to balance this with their commanding nature.

INTPs don’t really like being in leadership roles, simply because they enjoy being left to their own devices. They also dislike having to command people, but that doesn’t mean they aren’t good at it. INTPs can often be great as bosses and supervisors, since they know how to give people clear instructions and do their best to remain friendly. While INTPs might not be the most bubbly people, they often aren’t rude, and this helps them put off a commanding yet polite personality.

ENTPs don’t mind being in leadership positions, but at supervisors they can often be a bit incapable of staying focused on one things. They find themselves bouncing around to new things and projects, and this can sometimes be confusing for the people underneath them. Anyone turning to the ENTP for supervision, but not get the directness they are hoping for, since they don’t really like having to boss people around.

ISTJs do make for decent supervisors, since they are good at taking charge in order to get things done. They can often observe people and figure out ways for them to be more efficient in order to get the job done. They can often instruct people and delegate work fairly well, the biggest struggle for ISTJs is having to constantly interact with people. While it might be tiring that doesn’t mean they aren’t good at it, and so they are often very good in supervisor positions.

ESTJs often make for excellent supervisors, and even enjoy these positions. They like having a command in this way and are good as leaders. ESTJs enjoy delegating to others and are good at finding ways to make the team work more efficiently. For the ESTJ it is rewarding to work together and find a way to help their workplace run smoothly and effectively. As supervisors they are often commanding but try their best to be friendly and polite as well.

While ISFJs don’t really like having to order others around, they can still make for decent supervisors. They are often friendly people and enjoy getting along with others. As supervisors the ISFJ tries their best to understand their workers and they want to create a sense of harmony in the workplace. They want to find a position for everyone to feel comfortable and show them how to improve at their jobs.

ESFJs often make for natural supervisors, since they are both friendly and capable of leading others. They know how to instruct people and show them how to improve their work, and are capable of doing this in a kind and friendly manner. ESFJs often know how to inspire others to feel happy in their job, and feel more capable of improving and growing into their position. ESFJs don’t like making others feel bossed around, instead they want them to work to please the ESFJ.

ISTPs rarely find themselves wanting to be supervisors, simply because they prefer their space. Having to constantly monitor what others are doing, can feel a bit exhausting for them after a while. If they are in a workplace where being the supervisor allows them to simply give instructions and not have to constantly obsess over details, they can be fairly good at it. Their struggle is having to command others, especially people who don’t simply respond and do their jobs properly.

ESTPs are not naturally supervisors, simply because they find themselves easily distracted. They can also be somewhat impatient people, and have a hard time dealing with people who don’t listen well. ESTPs can lose their temper when they are trying to get something done and one of their workers is incapable of really doing their job properly. They are outgoing and friendly people but sometimes in the workplace they can be a bit more stubborn.

ISFPs don’t often enjoy being supervisors, especially if they have to order people around. Being in this type of position can feel like too much pressure and responsibility, and leaves the ISFP feeling a bit drained. They would rather give people room to make their own choices and don’t want to make them feel controlled. This can make it hard for the ISFP to crack down when people are making too many mistakes.

ESFPs can make for surprisingly good supervisors, especially since they are friendly people who try to make things fun. At the same time they aren’t afraid of cracking down when people clearly are not getting things done. ESFPs want the workplace to be built on a rewards system, and when people work hard they get to actually enjoy the environment and things really aren’t stressful or strict.