ENTJ Virtues: The Importance of Inner Morals for the ENTJ 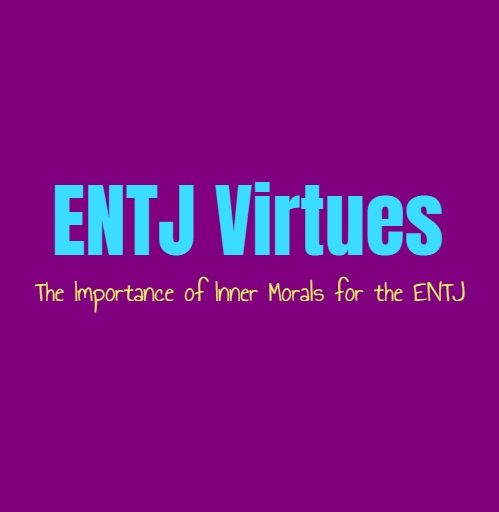 ENTJ Virtues: The Importance of Inner Morals for the ENTJ

When it comes to a sense of morals the ENTJ does have their own strong inner beliefs. People might view them as harsh or cutthroat, but they are often misunderstanding the ENTJ and what is important to them. Just because they are direct people who go after their goals aggressively, does not mean the ENTJ does not possess limits or morals. For the ENTJ what they believe to be right or wrong, is often something which they weigh internally and don’t need to seek others help with. They don’t want to allow the emotions of others to cloud their judgement, and they don’t feel like they have to answer to anyone about their beliefs. When it comes to virtues and holding onto what is important, the ENTJ is certainly capable of doing this.

What Being Virtuous Means to the ENTJ

When it comes to being virtuous the ENTJ often holds honesty and transparency as one of their main values. They see someone who is completely sincere in their actions and words as someone who is moral and virtuous. A person who does not pretend to be something they aren’t, and who does not lie to those around them. This is why honesty is such an important value for the ENTJ, since they truly believe that it is a strong moral which should be upheld. Someone who is moral to the ENTJ is also a person who has a sense of integrity and doesn’t do things which will be harmful to those around them simply for selfish gain. While ENTJs don’t feel like they should be responsible for the emotions of other people, they still don’t feel it is acceptable to hurt those people or affect their lives negatively. Someone who goes around wreaking havoc on the lives of others without any personal responsibility for their actions, is not someone the ENTJ sees as moral or good.

Most people don’t realize this about the ENTJ, but they do believe in making a positive difference in the world. Their views are simply much more logical than they are emotional, and so for them this difference should be made with facts and logic to back them up. They use reason as a means of understanding the world, and this pertains to what being moral is to the ENTJ as well. They don’t feel like someone is bad who focuses on building their own future without constantly catering to the emotions of others. When this person starts to do things which harm the lives of others, then the ENTJ will see things differently. They definitely have their own standards to what they view as virtuous and good, but for the ENTJ this is still something they feel is important.

Where Their Virtues Come From

ENTJs are not emotionally driven people and so their sense of morals don’t often come from their feelings. Instead the ENTJs uses facts and information in order to decide what is truly right and wrong. This does not mean their morals are any less valuable or sincere, it actually makes them much more sturdy and unwavering. Since they don’t base these beliefs on feelings, the ENTJ doesn’t often change their mind about what they see as right or wrong. Once they develop these morals and inner beliefs, the ENTJ is likely to hold rather firm to them without allowing others to change their minds or make them doubt themselves. This is because those morals are based on a lot of reflection and research, before the ENTJ ultimately comes to their conclusions about what they see as morally good.

The ENTJ will observe how certain things affect others and how the world is affected by certain actions. When these actions harm others or negatively affect their lives, then the ENTJ will see this as wrong. They can certainly use logic and practicality as a means of viewing the world and judging if something is truly the moral choice to make. This helps the ENTJ stand by those beliefs, even when others would waver under the pressure of people around them.

ENTJs often value honesty as something truly important, especially as it pertains to morals. When someone is dishonest and constantly hiding things, the ENTJ doesn’t view this person as very moral or virtuous. They believe that anyone who is being good and making the right choices, will not be afraid of being upfront and honest about themselves and their actions. This is why the ENTJ doesn’t want people around them who are liars, and so they strive to connect with honest and transparent people. ENTJs don’t just care about what appears right in the moment, instead they strive to make choices which are good for the long-term. They don’t want their actions to just feel good in the present, especially if they will view them as wrong and immoral down the line. While morals might not be the absolute most important thing to the ENTJ, this doesn’t mean they don’t value them in their own way. This is part of what makes most ENTJs rather trustworthy companions, as they believe in always being honest with those around them.