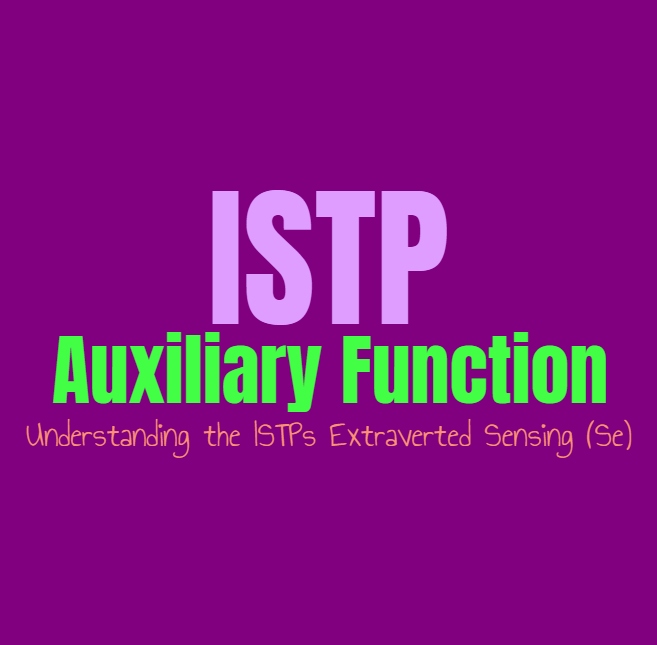 When searching for a deeper understanding of the personality types, it is important to understand each one of their functions. While we often focus on the dominant and even inferior functions, knowing the auxiliary and tertiary ones are also vital. It is not just about knowing what functions each type possesses but rather how these functions behave within the stack. When a function is dominant it will present differently than when it is auxiliary, and so understanding this is truly important if you want to understand each personality type. Knowing each function on it’s own doesn’t really give you a true comprehension of how the personality type is going to utilize  that function. Instead you need to learn more about the placement of each function and how it corresponds with each personality type.

ISTPs are often recognized by their extraverted function, which is also their auxiliary function. Their dominant introverted thinking is a big part of how they process information, but without their extraverted sensing the ISTP would not respond to this information in the same way. This is why understanding the aux function and the role it plays is so important in understanding the ISTP a bit better. This extraverted sensing expresses itself similarly at first glance, but it much different in the ISTP than it would be in someone who is Se dominant. Their introverting thinking is still their most actively utilized function, and their Se is what aids the use and processing of that function. Without understanding the way their Se responds to their Ti, there is not a complete comprehension of how the ISTP is going to filter their information and how they are likely to respond to things as well.

Extraverted sensing or Se is very focused on the physical world and living in the present. Someone who uses Se as their dominant function doesn’t like getting hung up on past or future situations, instead they want to take things as they come. They are extremely connected to their physical presence and their senses, wanting to connect with things they feel and see. For the extraverted sensing types it is important to live in the moment and follow what feels right to them. They can be rather good at things like sports or spatial awareness, being very in tune with the world they see, touch, smell, taste and hear. For these personality types who use Se as their dominant function, it can be hard to understand why some people seem so distracted or spaced out, since they are focused on connecting with the present moment.

This is something which can be useful in more ways than just quick reflexes or being able to enjoy the moment. The dominant Se user is often able to recognize the smallest changes and adjustments in their environment. They can see when something isn’t quite right or fitting into what they know to be previously accurate. When changes occur the Se dom will be able to take notice of this, and this can help them understand when something is wrong around them. It is connected to the physical and the things they tangibly see, but can also help them understand when a person is upset. Since being truly upset can alter someone’s physical presence, the Se dom will often take note of this. They can also tell when someone is not feeling themselves, and this helps them in certain medical fields as well. Being so in touch with their senses is something which can make the Se user rather capable and skilled at predicting when certain things might occur.

ISTPs are often seen as laid back and go with the flow types, and this is in large part because of their extraverted sensing. This function allows them to live in the present moment, soaking up the joys of whatever is most exciting around them. Instead of becoming hung up on the past or stressing too much over the future, the ISTP wants to live in the present moment. They are not afraid of taking action when something inspires them or when something needs to be done, because they are aware of what is going on in front of them. While other types can become hung up on what is going on inside of their own minds, the ISTP is capable of stepping outside of this in order to get things done. Their dominant function is their introverted thinking, which is an internal framework of information which the ISTP processes and uses to understand the world. This is definitely important for the ISTP, and it can get them caught up in a web of inner thoughts and ideas. This is why understanding their auxiliary function is so important, since this is what helps the ISTP become in tune with the physical world around them instead of becoming trapped inside of their own minds. While the ISTPs inner thoughts are rich and complex, they are very much present in the physical world and in tune with their own senses. They use this inner framework of information to become skilled problem solvers, often working with their hands a lot. ISTPs often enjoy things which allow them to connect things physically, wanting to take something apart and put it back together again in order to understand how it truly works. This makes them more visual than some other Ti users, since their Se is connected to this.

This is why understanding these functions is vital, as it makes the ISTP behave much differently than other Ti users might. They still base things off of information and facts, but are very grounded in reality because of their Se. They want things to be connected to those senses, using them to feel for information and connect with what is around them. This is why ISTPs are capable of taking action in the moment, using the information they have gathered in order to step forward and keep that flow and motion. They don’t become stagnant because of their Se, which allows them to jump into things in the present.