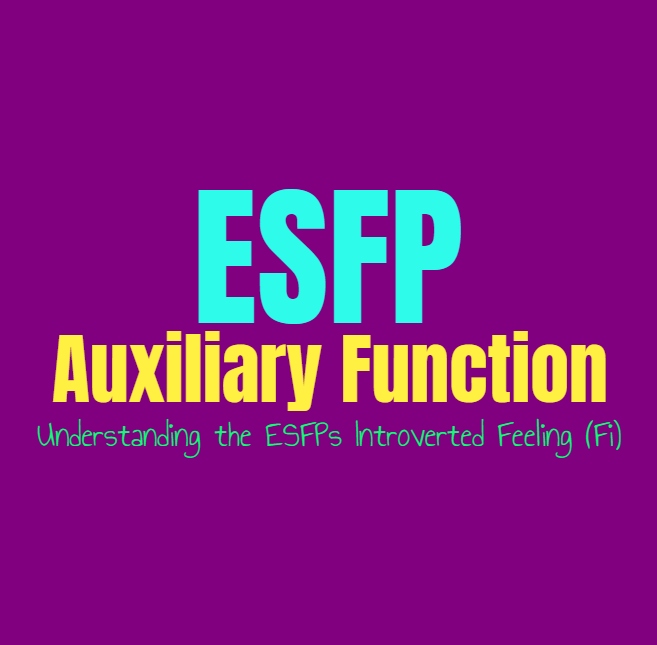 When searching for a deeper understanding of the personality types, it is important to understand each one of their functions. While we often focus on the dominant and even inferior functions, knowing the auxiliary and tertiary ones are also vital. It is not just about knowing what functions each type possesses but rather how these functions behave within the stack. When a function is dominant it will present differently than when it is auxiliary, and so understanding this is truly important if you want to understand each personality type. Knowing each function on it’s own doesn’t really give you a true comprehension of how the personality type is going to utilize  that function. Instead you need to learn more about the placement of each function and how it corresponds with each personality type.

ESFPs are outgoing people who truly love to connect with others and live very much in the present. Their dominant function is their extraverted sensing, which is often what is most outwardly recognized when people meet or first get to know them. While the ESFP dominant function is a big part of how they respond to and process the world around them, their auxiliary function also plays a big role in supporting this function. Without understanding their auxiliary introverted feeling, there won’t be a true grasp on the ESFPs behaviors and understanding of the world and information they take in. In order to understand the ESFP a bit better, you need to understand how their auxiliary function works as well. For the ESFP their introverted feeling plays a different role than it would for someone who uses this as their dominant function. While it makes them behave differently than an ISFP or INFP, it is still important to aiding the ESFP dominant function and helping them make decisions.

Introverted Feeling (Fi) is a function which is focused on the users inner world and sense of inner morals. Fi is what creates this strong sense of right and wrong and helps the dominant user to become rather rooted in these beliefs. Someone who uses strong Fi is going to focus a lot on understanding themselves and what they feel is truly the right path to take. They want to be sure that they are following a sense of morals and not straying from this too much. When they do make mistakes they can actually be rather hard on themselves, wanting to find a way to make amends. They care deeply about doing what they feel is right and want to be sure that they are not going against these inner morals. While this is an introverted function, it is still very much connected to the world in the sense of caring for what state it is in. The Fi user might not gain those morals and beliefs outwardly, but they do want to be sure that they consider how their actions are affecting others. It is however, based on the person’s own internal sense of values, and is rarely something which can be affected by the outside world or social norms. Instead it is based on what the Fi user feels is right and what they know to be true in their hearts.

There are common misconceptions that Fi is simply a strong connection to inner feelings, but it goes much deeper than this. This is how the INFP/ISFPs make decisions, and how they help to understand the best choices to make for themselves and others. It is tied to their values and morals, causing them to strive to do what they believe to be good and right.

For the ESFP their auxiliary Fi plays a big role in how they make decisions and what they value. This is their internal set of morals, helping the ESFP to figure out what they believe is right and wrong. While their dominant function is based on the physical world and drives them to take action in the moment, their Fi is what helps balance this out and gives the ESFP a sense of how to avoid doing things they consider bad or wrong. This is where people misunderstand the ESFP and don’t realize how important their inner morals actually are to them. They value doing what is right and don’t want to do anything which might harm other people. They can be misunderstood and considered reckless or flighty, when in reality the ESFP often has a firm grasp on their actions and strive to do what they feel is right. While they might become caught up in the present moment and can seem reckless because of this, the ESFP doesn’t veer too far from doing what they believe is right. They still have a moral compass which inspires their actions and helps the ESFP to avoid doing anything which breaks away from this. Their Fi helps them to avoid choices which are too caught up in the moment that they betray who they are, instead the ESFP takes action when they are inspired to do so.

Their introverted feeling is what causes the ESFP to value authenticity and being honest with themselves and others. They care about being true to who they are, always striving to understand themselves better. This can make the ESFP truly confident in their choices and beliefs, since they spend a long time refining this and working to understand what they truly desire and believe in. This is something most people don’t understand about ESFPs at first glance, which is why digging deeper is so important. While they are connected to the physical world and live very much in the present, the ESFP also cares about doing what is right and staying true to themselves. They value being considerate of others, taking time to be sure they are not doing anything which is harmful if it can be avoided. They do care about following their passions and certainly live in the moment, but they also care about being sincere and honest.