Are You Good at Reevaluating, Based on Your Personality Type 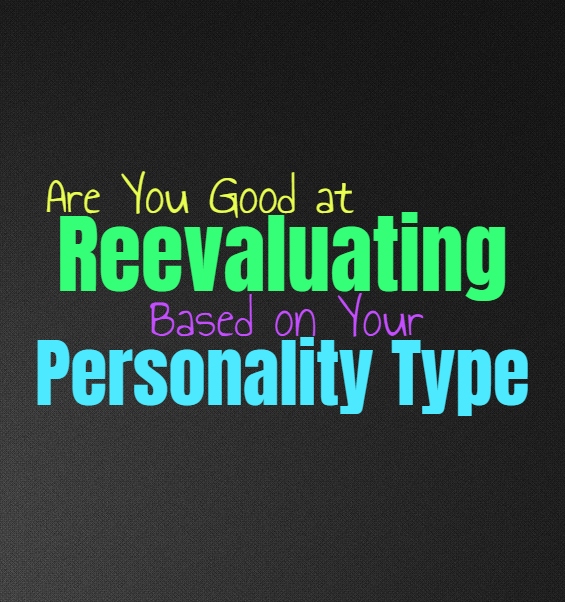 Are You Good at Reevaluating, Based on Your Personality Type

To reevaluate doesn’t necessarily seem like a skill or ability, but in truth this is something not everyone naturally feels comfortable doing. Once they have decided to do something a certain way, having to step back and reevaluate the situation going forward can actually feel somewhat exhausting for most people. Here is how good you are at reevaluating, based on your personality type.

INFJs do sometimes struggle with reevaluating and need some time adjusting to change. They can get caught up in doing things a certain way and so when change occurs they might not reevaluate right away, or when they should. It can take something pulling them back for the INFJ to realize they need to really step back and reevaluate their path and the situation. They don’t really like having to change their process and do things differently. While they are capable of it, this type of experience can be a bit frustrating for the INFJ.

ENFJs do sometimes struggle when it comes to reevaluating a situation, since they like to plan things out and follow through with this. They aren’t fans of having to switch things up and reassess what they have already begun. ENFJs might dislike this type of change and struggle to really realize they need to take a step back at first. Ultimately they are focused people who don’t want to let anything stand in their way. When they realize they need to reevaluate they will do their best to look at the situation from a different angle so that they can move forward.

INFPs don’t mind reevaluating the situation, sometimes they do this just for the fun of it. They enjoy analyzing information and want to figure out the many potential angles with something. INFPs don’t like doing everything the same way each time they do it, and so they enjoy reevaluating sometimes. INFPs don’t like doing this when it comes to their inner morals and beliefs though, and want to stick with what they know to be true and right. When it comes to moving forward INFPs sometimes reevaluate just to see the situation from a different angle.

ENFPs are often capable of reevaluating, especially since they enjoy analyzing situations. ENFPs want to look at things from many different angles so that they can uncover more details and information. They see things in patterns but this means going off in different directions and searching for various connections. For the ENFP reevaluating a situation is more useful for them than just going forward with the same thing every single time. ENFPs want to liven things up and take a fresh approach, which means taking a step back and reevaluating.

INTJs will definitely reevaluate when it seems like something isn’t going as they had planned. Most of the time though, INTJs prefer to have the situation go smoothly and this is why they take so much time to be sure before moving forward. They evaluate and analyze things so many times before actually attempting something, since INTJs really don’t want to fail. They want to be sure about things before they approach a new task, and so for them this reevaluating happens before taking this next step.

ENTJs want to be sure about everything they do before they move forward with their next task. They want to always be prepared and so they spend a lot of time planning before they take something on. ENTJs do plenty of evaluating and analyzing ahead of time, but that doesn’t mean they are incapable of reevaluating once they have started. When they realize something isn’t working efficiently then they want to take a step back and figure out an approach or backup plan which will help.

INTPs do reevaluate things often, since they want to assess the situation as they move forward. While they believe in analyzing before even taking these next steps, they are also willing to take a step back and reevaluate if need be. INTPs want to get things right, but they also want to learn from each step and be sure they are really taking away from what is happening. INTPs want to constantly be analyzing and absorbing information as they go along. For them it is smart to reevaluate if things aren’t going quite as expected.

ENTPs do believe in reevaluating especially when they can learn more from doing this. They want to constantly be analyzing the situation and learning as they go along. While ENTPs do analyze ahead of time and prepare for the process, they also believe in being open-minded and capable of seeing ways in which they might need to change. If the ENTPs sees that things aren’t going as expected then they can certainly take a step back and reevaluate.

ISTJs believe in getting things right the first time around and so having to take a step back and reevaluate can be frustrating for them. They want to keep pushing forward and strive to get things right immediately. ISTJs do believe in being efficient though, so they will do their best to take a step back if they need to reevaluate. Most of the time they dislike change and having things mixed up, but ISTJs don’t want to let this stand in their way.

ESTJs do their best to get things done correctly the first time around, and don’t like feeling as if they have made mistakes. ESTJs don’t really like changing or having to step back and reevaluate things. They will however, do whatever it takes to get things done efficiently and so sometimes this means reevaluating even if they don’t feel comfortable with this. ESTJs don’t really like change or having to reassess something they feel should have been done right the first time around.

ISFJs don’t really like having to reevaluate, since they prefer to get things done right the first time around. If they have to take a step back and look at the situation from a different angle, they will do their best because they don’t want to let anyone else down. ISFJs care about being efficient because they care about pleasing their loved ones and the people around them. They will reevaluate if this is what they have to do, especially if they know it is important.

ESFJs care about getting things done right, but having to take a step back and reevaluate once they have already begun can be a bit frustrating for them. Reevaluating a situation can be a bit unnerving for the ESFJ, since they don’t really like change or having to switch things up once they have gotten into it already. They will do whatever it takes to get the job done and please their loved ones, but this isn’t something they necessarily enjoy doing.

ISTPs are constantly reevaluating and looking at things from a different angle. They live very much in the moment and so they don’t need everything to be planned a certain way ahead of time. ISTPs enjoy being able to assess a situation in a new light, and want to take different approaches in order to really learn from their experiences each and every time.

ESTPs live very much in the moment and enjoy being able to take on things from different angles. They will certainly reevaluate something if it seems like it needs to be approached from a different angle. While they might get their hopes up for certain things, ESTPs are comfortable with change and will do their best to adapt when something does not go as expected.

ISFPs can certainly reevaluate when something isn’t going as they expected. They live very much in the present moment and so they are often open to changing their minds as things go along. ISFPs aren’t stuck on doing things a certain way, instead they enjoy approaching the situation based on their mood in the current moment.

ESFPs do feel open to reevaluating when they realize things are not going as they might have hoped. They care about doing things in the present moment and want to enjoy taking things on as they come. ESFPs don’t mind change or having things mixed up a bit, and so they can certainly reevaluate the situation if need be.