ISTJ Flirting & Dating: How to Attract an ISTJ 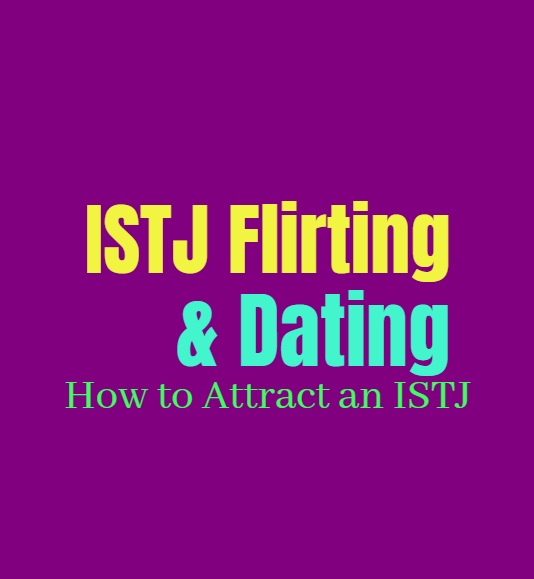 ISTJ Flirting & Dating: How to Attract an ISTJ

ISTJs are logical and practical people, and believe in following the facts rather than their emotions. They don’t want to fall into allowing feelings to control their actions, but that doesn’t mean ISTJs don’t care about their loved ones or have a desire to find a romantic partner to share their lives with. For the ISTJ dating is not something they do casually, and so they are often have the intention of finding someone to commit to, not just something which is meant for the present moment. ISTJs aren’t often viewed as flirtatious people, and so their way of flirting can be confusing to some. Just because they don’t flirt in the way people expect, doesn’t mean the ISTJ doesn’t have ways of showing when they are interested in someone.

ISTJs are often much more direct and when they are interested in someone they aren’t afraid of showing it. They might not flirt and jest in the way so many others do, but the ISTJ will ask plenty of questions. They want to know more about someone when they are interested in them romantically, and so they will show this curiosity. The ISTJ will also ask if this person is single or involved, which is an obvious sign that they are interested in them. ISTJs just aren’t naturally giddy people, and don’t believe in flirting by being emotionally and over the top. They want to be more direct and find the best ways of getting to know someone better. They will learn about them from friends and even directly, but the ISTJ wants to uncover the important information about this person so they can be sure they should attempt to date them. They want to know they would make a good match, as ISTJs do approach things from a practical sense.

ISTJs are not likely to flirt with someone or show interest unless they are serious about them. They don’t like leading people on or making it seem like they want to be with them when they are unsure. ISTJs believe in being sure about things and taking action with intention. This is why they become frustrated with people who flirt shamelessly, without caring about what they are doing. ISTJs don’t consider friendly behavior or jesting with friends to be flirtatious though, and find it silly when people assume that is what it is.

When the ISTJ is in a relationship they take this commitment seriously, and won’t simply enter into it without intending to make it work. When the ISTJ is with someone they want to be sure they can do whatever it takes to make their lives work together. They will go out of their way to help their partner achieve their goals and solve whatever problems they might have. ISTJs are very supportive of their loved ones, and want to always be loyal and stand by their side. ISTJs are naturally very dependable people, especially when it comes to their relationships. They will do whatever they must in order to be there for this person, and want to show that they care by being their support system. ISTJs might not be emotionally expressive people, and they don’t like talking about their feelings at all- but that doesn’t mean they don’t have ways of showing they care. When the ISTJ cares for someone they are much more practical in the way they express this. They will do things for them, whether this is little things like remembering to buy their favorite foods or taking out the garbage- or sometimes bigger things like helping this person improve their lives and achieve their goals. ISTJs just want to be someone who is trustworthy and always supports their partner when it comes to their romantic relationships.

Casual dating is truly not rewarding for the ISTJ, since they often feel like they are wasting their time and energy. They don’t do things without having some sort of purpose in their actions, and so casual dating can feel really draining for the ISTJ. They don’t want to spend time with people who don’t understand them, and rarely enjoy the idea of having to meet a bunch of new people. ISTJs stick to what they know and are comfortable with, rather than constantly diving into new things unprepared. For them casual dating feels forced and unnatural, and really doesn’t give them any sense of fulfillment. When the ISTJ dates someone they want to take this seriously, in hopes of finding the person they are meant to be with. With casual dating the ISTJ just feels like they are expending energy on people they aren’t happy to be around, and this just isn’t enjoyable for them.

How to Attract the ISTJ

ISTJs are attracted to people who are capable and intelligent. They are drawn to someone who has a strong sense of independence and who knows what they want from life. Confidence is a truly attractive quality for ISTJs, and someone who is capable of standing by their own convictions. A person who has this sense of purpose and direction, is going to really draw the ISTJs attention. They enjoy being around people who are passionate as well, and often want to learn more about them and who they are. Someone who the ISTJ can actually have an in depth conversation with without feeling bored or exhausted, is definitely going to be someone the ISTJ is interested in. They become drained with most people, and so someone who is overly emotional really isn’t enjoyable for the ISTJ to be around.