ENTP Myths, Stereotypes & Misconceptions: Cliches and Tropes That Are Inaccurate 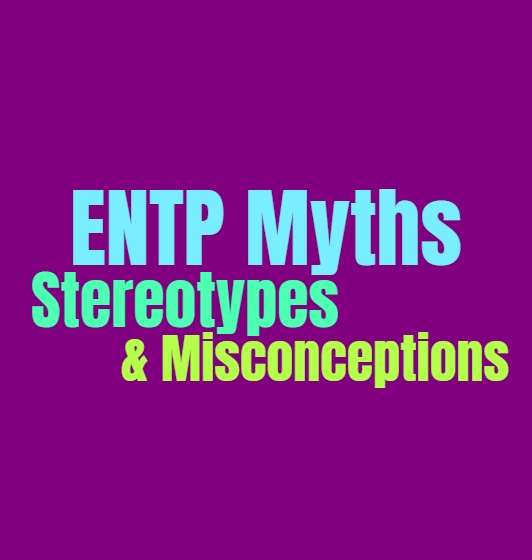 ENTP Myths, Stereotypes & Misconceptions: Cliches and Tropes That Are Inaccurate

Stereotypes are common for each personality type, the trouble is when people buy into them as if they are facts. There are many stereotypes connected to the ENTP personality, which can create these ideas about them that are entirely untrue. This causes people to view ENTPs in a certain way, often find themselves shocked when they realize these things aren’t factually true. They also come from not really digging deeper and only seeing what is happening on the surface. ENTPs are complex people with many layers to their personalities, as well as unique reasoning behind why they do things a certain way,

ENTPs can be stereotyped as cold and uncaring people, only focused on logic and facts. This makes them appear as if they lack compassion towards others and simply do not care about their well-being. It can also cause the ENTP to be viewed as heartless or someone who lacks sincere morals in life. This stereotype is one of the most negative ones attached to the ENTP, and is also highly inaccurate. This type of stereotype is truly ignorant and doesn’t connect with what is going on underneath the surface of the ENTP. There are so many people who will believe these stereotypes, causing them to think that the ENTP is a selfish person who really only cares about doing things for their own needs and lack a sense of morals. This pegs the ENTP as someone who does not care for right or wrong in an emotional way, instead they just do whatever they please without care for others.

The stereotype that ENTPs will argue over anything to an unnecessarily degree, certainly lacks awareness of who they are. It basically makes it seem like all the ENTP does on a daily basis is find pointless things to argue about just because they want to. It pegs them as someone who cannot relax or just have a normal conversation without finding something to disagree about and really dig into the conversation when someone clearly does not want to. It makes the ENTP seem like they cannot respect clear boundaries, even when someone expresses their need for space.

Saying that ENTPs are cold and uncaring could not be further from the truth. ENTPs actually do have somewhat active Fe (extraverted feeling) which is aware of the emotions of others. While ENTPs have a tendency to bury their feelings or mask them with humor, that isn’t because they are uncaring. ENTPs actually feel things very deeply and often care immensely about their loved ones. They are the type of people who often become very focused on someone they love, even if they don’t necessarily show this outwardly. When the ENTP cares for someone they think of them often and all of the ways in which they can make this person happy or improve their lives. For them it isn’t easy to express feelings in an over the top or affectionate manner, but ENTPs are not cold people by nature. They value logic when it comes to making their choices, but this is simply because they understand facts much more naturally and know they can trust in these things. ENTPs are not uncaring people, they often care a lot more than people realize and really do want to help others and make a positive difference where they can. ENTPs actually put a lot of internal pressure on themselves because of how much they care, and they do possess strong morals.

ENTPs are not at all lazy people, although they do sometimes struggle with motivation. In truth ENTPs have a hard time finding the motivation with projects that don’t deeply inspire them. While they might struggle with these things that does not mean they are lazy at all. The ENTP has an active inner mind which is constantly running through so many ideas and different complex feelings and thoughts. This makes it hard for them to focus on things which really aren’t exciting or inspiring for them. ENTPs might not be great at finishing certain projects the way that people might want, but that does not make them lazy people at all. ENTPs have wants and desires and actually dislike feeling stagnant or stuck in one place.

While ENTPs do enjoy debating, this isn’t simply for the sake of arguing over anything. For the ENTP it is about learning more about the subject and the person they are debating with. They don’t want to argue about pointless things, they really only look for something meaningful to be able to debate. The ENTP doesn’t argue for the sake of causing discord, for them it is about being able to really learn and understand more about themselves and others. If someone expresses their boundaries firmly and clearly to the ENTP, they are more than capable of respecting these boundaries. Sometimes people stereotype them as someone who just argues constantly about the smallest things, but this is highly inaccurate. ENTPs just enjoy learning and sometimes getting into these heated debates helps them to do so, but it isn’t about arguing for the sake of disagreeing with someone or to be rude.

These stereotypes are harmful because it often pegs the ENTP as someone who is cold and selfish, and this does not express them at all. This doesn’t truly get to the heart of the ENTP or the intentions behind their actions. This leaves people unaware of what really exists inside of the ENTP, and what makes them such interesting and special people. It is important to abandon these stereotypes and misconceptions, both for the sake of the ENTP and for anyone who might want to get to know them. These stereotypes are harmful and make ENTPs seem like something they are not, lacking of any real information or truths.