INFP Flirting & Dating: How To Attract an INFP 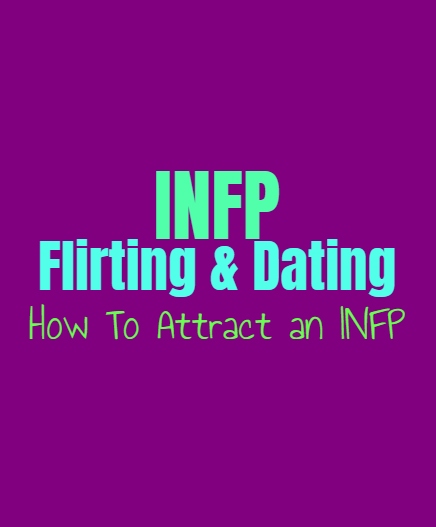 INFP Flirting & Dating: How To Attract an INFP

Getting to know someone on a personal level can be a sometimes scary but exciting process. When it comes to dating and romantic relationships, sometimes understanding the object of your affection a bit better can help to gauge whether or not they are interested in you. INFPs care deeply about love and dating and take these things seriously while at the same time being rather playful in relationships. INFPs care about the people in their lives and want to be able to grow closer to them. They have their own unique way of flirting and behaving in a relationship, which can be hard for people to really read and understand on the surface.

INFPs can be a bit awkward with flirting at times since they can feel shy in these types of situations. While INFPs have an outgoing side, they can also be more internalized, afraid of being too vulnerable. When the INFP really likes someone and wants to flirt with them, this can be seen as weird to some people who don’t fully understand their behaviors. For the INFP, flirting means showing parts of themselves they would normally keep inside and exposing these behaviors to the person they like. The INFP also might expose some of their dark humor to this person, wanting to show them what they find amusing so that they can really share with their crush.

For the INFP, flirting is often different depending on their mood or the specific INFPs tastes. But for them, flirting means trying to show this person the different layers of their personality. Sometimes they even enjoy being a bit over the top, with the goofy pick-up lines and expressions of affection in a playful manner. For the INFP, this isn’t meant to be taken too seriously and is done to show their interest but also that they have a sense of humor about the situation. Sometimes when the INFP likes someone very much, they can actually become nervous and have a harder time flirting with them so openly. They might really need the other person to make the first move and show that they are interested. INFPs can be such open and fun people when they get to know someone, but at first, they are often nervous and shy around someone they like. It takes time for them to open up and feel comfortable, but once they do, they start to really shine and show these different parts of themselves.

INFPs take romance and love very seriously, and this is something they almost always value deeply. They are idealists, which can often mean that they are searching for something beautiful and real. They want a relationship that goes beyond something stagnant and comfortable. Instead, the INFP is searching for more. For them, their love interest needs to be someone truly special, someone, who sparks their soul and makes them feel a sense of passion and excitement. They might have high standards when it comes to relationships, and this does come from that often idealistic mentality that the INFP has. They can put their partner on a pedestal without meaning to, and see only the good in them.

In relationships, the INFP is very giving and caring and wants to feel close to their partner. They want someone they can share their intimate secrets with, no matter what these things are. INFPs want this connection to be something lasting, but that doesn’t mean they need to be physically around this person all of the time. For them, it is about feeling close even when they are apart and even when they need some space and time to themselves. For them, this is truly special and helps them realize how important their relationship is to one another. They don’t need to constantly be around this person to feel their love and closeness. INFPs are good listeners, and they enjoy being able to have someone around who they can talk for hours. They want to get into deep conversations and don’t like anything shallow or meaningless.

INFPs aren’t made for casual dating and often feel completely disconnected to this type of relationship. If they are someone convinced to give casual dating a try, they will likely feel exhausted by the experience. The INFP is looking for something real that sparks deep into their heart and soul. They aren’t searching for a one-night stand or something which only touches the surface shallowly. This is much more exhausting for the INFP, whereas something real and complex will energize and inspire them.

What Attracts the INFP

INFPs are often very attracted to intelligence and someone who uniquely uses their mind. They are drawn to people who do not think like the rest of the world and instead have their own way of approaching things. INFPs don’t become drawn to someone who is shallow or who lacks a certain kind of depth which they can really dive into. When someone has a complex and intricate inner mind, the INFP is often very intrigued by this. They become excited by someone who is intelligent and can even teach them about new things they otherwise would not have known or been opened up to.

INFPs are also attracted to someone sincere and honest with them. They find a truly authentic person very appealing, whereas someone fake or shallow is quite the opposite for them. INFPs want to be with people who are open about who they are and who don’t hide behind walls and lies. Someone who cannot be themselves around the INFP is not someone they are drawn to. They don’t want a person constantly putting on an act or trying to be more impressive for those around them. Someone who panders or tries to make people like them often feels completely unappealing to the INFP.

When it comes to relationships and romantic partners, the INFP wants someone capable of listening to them. They want someone who accepts their feelings and does not attempt to change them or invalidate them. This type of validation towards their emotions is deeply important for the INFP, as having someone who tries to mock these feelings is likely the worst feeling for them. A partner who is good at listening and getting into complex and deep conversations is truly going to be exciting and rewarding for the INFP.