How You Feel About Suffering, According to Your Personality Type 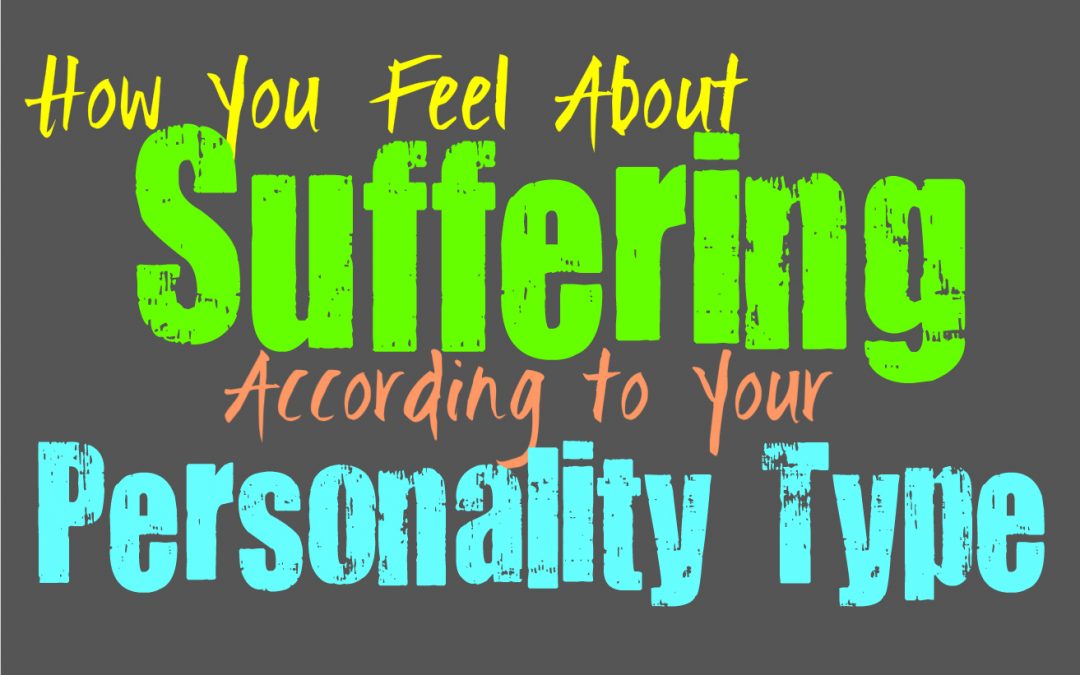 How You Feel About Suffering, According to Your Personality Type

Each person has their own approach on suffering and pain, and if it is something we need to endure or something they could certainly do without. While there are many beliefs that without pain we cannot truly appreciate joy, some people would rather not have to experience this at all. Here is how you feel about suffering, based on your personality type.

INFJs are often capable of understanding that their pain can bring growth, but that doesn’t mean they want to keep enduring it. INFJs are often stronger than people realize and are capable of taking things on that can seem like too much for most. While they can endure suffering and do their best to push through it, it does become draining after a while. They often believe in some sort of balance with these things, and realize that they need to accept some suffering in order to grow and fully appreciate the joy they have in life. At the same time the INFJ can become exhausted if they endure too much pain, and might become more in favor of numbness during those times.

ENFJs are often strong people who understand that some suffering is necessary in life. They do their best to remove this pain from their loved ones though, since it can sometimes be harder for them to endure. ENFJs have often gone through some hard times in their lives, and this is part of what makes them want to protect and shelter the ones they love so much. While their own pain creates a lot of growth in their lives and personalities, ENFJs do become a bit tired of constant struggles after a while. They work so hard to take care of everyone else that sometimes they can ignore their own pain for the sake of others.

INFPs are often capable of seeing beauty in pain, at least to some extent. They realize that in suffering they can grow and learn to become better and more humble people. INFPs are not opposed to experience hardships in life, they simply want to experience joy as well. They are capable of enduring these painful times, as long as they have hope for the better times ahead. INFPs simply don’t want to feel hopeless and number, and need to have the knowledge that there is plenty of good in their lives as well.

ENFPs often endure suffering as best they can, and are even capable of seeing their own growth through this. They can become a bit bitter and even guarded with certain pain though, especially when it comes from heartbreak. ENFPs believe in finding love and are often searching for someone who will understand and appreciate them. Sometimes enduring too much pain in this way can leave them feeling a bit jaded and closed off. For the ENFP it is about balance, the right about of sadness in their lives can bring them through it stronger and more appreciative, but too much will overwhelm them.

INTJs understand that a certain amount of suffering will help promote personal growth and strength. They aren’t afraid of struggles and will often take them as a challenge. When the INTJ endures something painful in their lives, they often search to find ways to improve their situation and make their lives better. They realize that life cannot be filled with all good times and joy, and are definitely not naive people. INTJs will take these times of suffering as an opportunity to learn and possibly avoid this hardship in the future.

ENTJs often recognize suffering as a part of life which helps them to grow and improve their situation. They take on their pain as a challenge and an opportunity to find ways to make their lives even better. ENTJs don’t believe in simply laying down and allowing bad things to take over their lives, instead they work hard to fight against them and improve as much as they can. ENTJs are capable of taking in the suffering and learning from it as best they can, even though sometimes they can become truly frustrated by it.

INTPs are logical people who will likely analyze even the suffering in their lives. They will take their hard times as a chance to learn and possibly improve themselves. INTPs don’t like approaching things from an emotional point of view, and so they try their best to make sense of their pain and feelings towards something. They often do their best to grow from these negative situations, and can recognize that they are completely necessary in order to understand and appreciate their surroundings much better.

ENTPs are likely to appreciate their suffering for what it is, and take it an opportunity to learn and grow. ENTPs realize that life cannot always be about joy and pleasant times, and so they understand that suffering is often a part of life for everyone. For them it can be challenging at times since they do prefer to focus on the things that bring them happiness and keep them moving forward, but that doesn’t mean they cannot understand and appreciate their suffering. They are often focused on growth and so they will do their best to learn from their pain in life.

ISTJs try their best to focus on improving their lives and pushing through the harder times. While they understand that suffering is something everyone goes through, they don’t often have warm and fuzzy feelings about it. ISTJs do their best to take on their pain as something to grow from though, and will do their best to improve their situation because of it. When the ISTJs endure suffering in their lives they often push themselves even harder to overcome it and find a way to a better life.

ESTJs are hardworking people who often recognize that life is comprised of suffering as well as joy. They do their best to learn from their pain and find ways to become stronger because of it. ESTJs don’t simply give up because they struggle a bit, and will often try to overcome their suffering by building a better lifestyle. ESTJs don’t like to become beaten down by struggle and will do their best to learn from it so that this does not continue to happen in the future.

ISFJs realize that suffering is a part of life, but they often seek to remove it wherever they can. They dislike seeing their loved ones in pain and often want to prevent it. ISFJs really don’t like having to endure these hard times, instead they seek to create a sense of peace in their environment. For the ISFJ constant suffering is just draining and leaves them feeling like they are failing to really care for their loved ones. They strive to remove the pain from the lives of others and seek to bring joy when they can.

While ESFJs can often recognize suffering as part of life, they do their best to remove it from the lives of others. They often push through their own pain and struggles by seeking to heal the pain they see in those they love. ESFJs want to create a sense of peace in their environment, which means doing their best to remove the pain and suffering from their surroundings. ESFJs might be capable of understand that suffering occurs, but that doesn’t mean they want to endure it.

ISTPs are analytical people, and because of this they are often more capable of comprehending the usefulness of suffering in their lives. While they can recognize that pain often promotes growth and improvement, that doesn’t make them drawn towards this. ISTPs want to experience the things that bring them joy and excitement, and so this is what they chase after. They can accept the hardships and suffering, but at the same time they work hard to avoid it when they can.

ESTPs don’t really like having to endure suffering and would much rather find ways around this. While they might be able to recognize that this is a natural part of life, that doesn’t mean they are welcoming to it. ESTPs would rather focus on the things they enjoy and often try to avoid the more painful moments in their lives. ESTPs are likely to feel happy about the growth they experience from their suffering, and would much rather live happier lives instead.

ISFPs don’t often enjoy having to endure suffering in life, and would rather focus on the good things they have. While they might be capable of seeing the beauty in it at times, it isn’t something they are drawn to. ISFPs would rather seek out the things which bring them a sense of joy, and strive to be around people who make them happy. For the ISFP too much pain and suffering simply brings them down and starts to remove their sense of hope for something better.

ESFPs don’t often feel a deep appreciation for suffering and sadness like some people do. They seek out the things that bring them joy and often want to find the best way to avoid suffering. ESFPs don’t like anything that brings them down and makes them feel overwhelmed. They want to enjoy every moment and this is what causes them to bounce around so much. If the ESFP encounters something unpleasant they would rather avoid this completely and find a way to move towards something happier and more fulfilling for them.