Do You Want Others to Feel Excited for You, Based on Your Personality Type 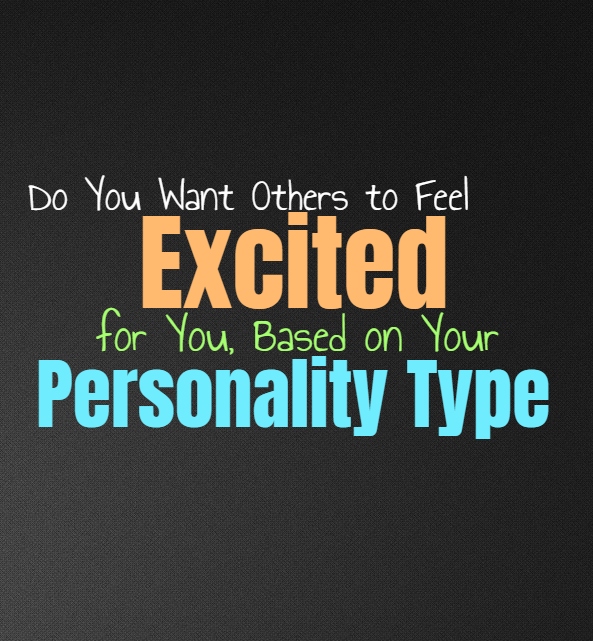 Do You Want Others to Feel Excited for You, Based on Your Personality Type

For some people having the people around them feel a sense of excitement towards their achievements, is actually truly important. They want to feel like they are congratulated and celebrated by the people they love, and don’t like when they can’t seem to muster up excitement for these accomplishments. Here is how important feeling excitement from others is for you, based on your personality type.

INFJs do want their loved ones to feel excited for them, especially when they have something important happening. For the INFJ it is truly rewarding to have someone who can support them and show that they are happy to see them. INFJs are often very supportive of their loved ones and do become excited when they accomplish something. For them it is important to feel this in return, as they want to have people who they feel a sense of appreciation from. They don’t need an overly expressive sign of excitement, but rather want something sincere and honest.

ENFJs really do want to have people in their lives who are excited for them. When the ENFJ accomplished something or is capable of really doing something special, they want their loved ones to feel happy for them. They want to see this excitement or at least have it expressed to them in a sincere manner. ENFJs don’t need to be constantly celebrated, but they do want to feel as if their achievement and happiness are something their loved ones are proud of and excited for.

ENFPs do want to feel excitement from the ones they love, especially when they have accomplished something they are proud of. They don’t like feeling as if people are envious of them and aren’t willing to join them in their excitement for something. ENFPs really do need to feel this sense of connection and want people who can celebrate these accomplishments and feel proud of what they have done. For the ENFP it is about feeling close to someone and feeling a sense of support for their bond.

INTJs don’t really need to feel excitement from others when they accomplish something, since they don’t necessarily strive for this. They do want to feel a sense of respect for these things, but excitement isn’t necessary. INTJs don’t really show outward excitement most of the time and so they don’t expect or need this from somebody else. They do however, want to feel support from the people they have close to them and want to know that these people are happy to see them succeed and want to be there by their side.

ENTJs do strive to accomplish things for themselves and so they can be proud of these achievement. They also care about finding people who they can connect with and share in these accomplishments. They don’t need an outward sense of excitement from someone, but they do want to have some sort of support and connection. ENTJs want to know that their loved ones are happy for them and truly excited to see them succeed. While it doesn’t need to be expressed with enthusiasm, they do want to feel it in some way.

INTPs do want to feel like their loved ones support them and are happy when they achieve something. For the INTP it is important to have people around them who are supportive, but they don’t want this to be insincere. They really don’t want to feel a fake sense of enthusiasm and don’t mind if someone chooses to express their excitement in more subtle manner. When things are over the top the INTP really does feel like they are being fake.

ENTPs don’t like to feel fake excitement or emotions from people and would prefer when things are sincere. They do however want to feel like their loved ones are there to support them and show excitement when they have accomplished something impressive. ENTPs don’t necessarily strive for them expression constantly though, and can usually be excited for things on their own without needing some sort of backup to make them feel better about it.

ESTJs don’t really need to feel an enthusiastic expression of excitement, but they do need to have it expressed somehow. They want to know that the people in their lives are supportive and happy to see them achieve their goals. For the ESTJ it is important to surround themselves with people who want to see them succeed and accomplish things. This is because ESTJs care about loyalty and strive to be someone who can also support their loved ones in return.

ISFJs do want to feel a sense of excitement from their loved ones when they achieve something, but they won’t usually express this need outwardly. They work hard to get things done and take care of the ones they love, and strive to see them happy. For them it is important to show their support, but they also want to receive this in return. ISFJs do care about feeling excitement from the ones they love, especially when they are truly proud of something they have done.

ESFJs definitely want to feel enthusiasm and excitement from their loved ones, especially when they are personally proud of something or excited about it. Without this sense of excitement it can often feel like they aren’t being supported and don’t really have people connecting with them. ESFJs don’t often express their own needs outwardly, and so it can be hard for them when people aren’t naturally showing their support or excitement for the ESFJs accomplishments and joy.

ISTPs don’t really need to feel excitement from those around them, and would rather people be sincere. They do become drained with people who are constantly drab and don’t have a sense of enthusiasm for life. They want to be able to experience new things and find a sense of excitement in their lives, but they don’t require a specific response from those around them. For the ISTP it is important to really do what inspires them and they don’t want people to pretend in order to make them feel better.

ESTPs often strive to find excitement for themselves, and so they don’t necessarily require it from others. They can often muster plenty of excitement and enthusiasm for things, not needing others to pretend as well. ESTPs do become happy when their loved ones are excited for them though, and become even more enthusiastic about the situation when this happens. For the ESTP it is just best if they have people who are sincere and willing to support them.

ISFPs do want people around them who can be supportive but they also want sincerity from them. Just having someone who is willing to listen to be there is often enough for them. ISFPs can create a sense of excitement around them, and just want people to be along for the ride. They care about having a support system but at the same time they are independent people who want those around them to be completely sincere.

ESFPs do care about having people in their lives who can be excited for them, or at least show a sense of support. They want people who can share in their enthusiasm and join them for the ride. ESFPs care about finding things which inspire them, and want to live their lives with a constant sense of excitement. When people around them cannot be happy for them and their achievement, then it can be rather draining for them.