Do You Have Codependent Tendencies, Based on Your Personality Type 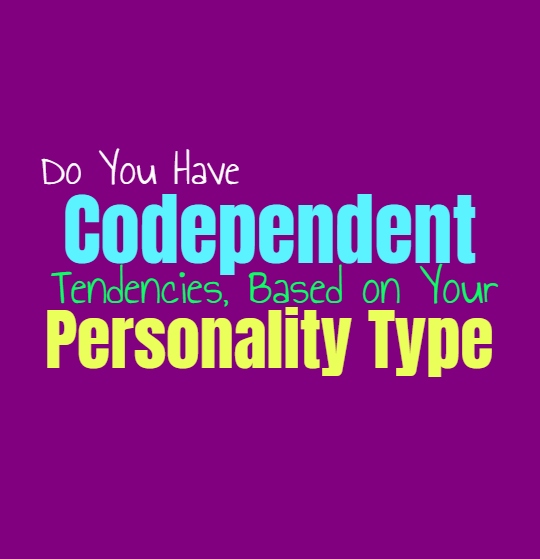 Do You Have Codependent Tendencies, Based on Your Personality Type

Some people lean towards having codependent qualities, and might find themselves wanting to mingle their lives with someone in this way. While others are much more independent and naturally want to be on their own with most things in life. Here is how likely you are to have codependent tendencies, based on your personality type.

INFJs often have an independent part of themselves, but this doesn’t mean they cannot also have codependent tendencies. They find themselves wanting to feel close and connected to someone else. They often want to find someone they can really bond with and feel something special with. INFJs can also be afraid of abandonment, and so once they do become close to someone they might lean towards codependency. INFJs are unique people who can often possess qualities which seem to completely contradict one another. Because of this they certainly can be both highly independent and also codependent people in different situations.

ENFJs are caring people who do often strive for some independence in their lives. While they care about doing things on their own terms, they do sometimes find themselves with more codependent behaviors. ENFJs want to feel connected to people, and can be fearful of losing these connections. Sometimes they act in ways which seem very codependent, wanting to be bonded and close to someone. They can feel distant easily and so they enjoy being able to feel close to someone and rely on them in ways.

INFPs are often very independent people who enjoy being on their own, and like having space to themselves. While INFPs might not appear to have codependent tendencies at first, they can develop them when they feel close to someone. They enjoy mingling their lives with the right person, especially when they feel truly connected to someone. INFPs want to be able to rely on someone and have that person rely on them for things. When they feel a sincere bond this can appear a bit codependent, or they can feel drawn to these behaviors.

ENFPs do sometimes become a bit codependent when they become close to someone who they can rely on. ENFPs do want to be independent at the same time, which can seem a bit contradicting. They want to be strong and do things on their own terms, and don’t like feeling as if they have to ask permission for things. At the same time ENFPs do sometimes become closely bonded to someone they love, in ways which can seem a bit codependent from an outside point of view.

INTJs really aren’t codependent people, instead they prefer to have their own space from others. Even when the INTJ is truly close to someone and feels connected to them, they don’t usually feel inclined towards codependent tendencies. They prefer to have some sort of separate even when they have a serious relationship, since they want to have some parts of their lives which are their own. This can cause the INTJ to seem a bit distant, just because they want to feel a sense of space.

ENTJs do enjoy have space and independence, even when they are close to someone. For the ENTJ it is definitely important to find people they can connect with and build a future with, but this doesn’t mean they want a codependent connection. ENTJs do care about a sense of closeness, but also care about having some room and space for themselves. They want to have their own sense of independence to be themselves and be able to work on their own growth as well.

INTPs definitely care about independence and because of this they can be less inclined towards codependent behavior. They want to feel a sense of space and time for themselves without every detail of their lives being encroached on. While INTPs care about making connections and want to have a sense of trust with someone, this doesn’t mean they want every aspect of their lives invaded by another person. They need some time to themselves and some things separate from others, and so they are often less likely to be drawn to codependent behaviors.

ENTPs want to feel close to someone but they don’t want it to be at the expense of their independence. They want to feel a sense of space and time to themselves, without feeling like they should be guilty over this. ENTPs really need to have some sort of freedom in their relationships and so for them codependency is rarely an attractive way of living. ENTPs really do strive for space, and some sort of connection where this is accepted and given without feeling controlled or guilty over this.

ISTJs do want independence but their desire for family and loyalty does sometimes cause them to have codependent tendencies. ISTJs are complex in the fact that they do want space and time alone, but that their family values can sometimes negate this for them. They want to be with people who are loyal and who are capable of mixing their lives together and developed a trusting and close bond. For the ISTJ too much space can mean that their bond is just not close enough, and so they might have some codependent tendencies.

ESTJs really do want to have space in some areas of their lives, but when they also want to feel connected. When they do develop close relationships the ESTJ takes this seriously and believes that commitments should be something they don’t let go of. They want to feel like they can trust these people, and so loyalty is one of the more important things in their lives. For the ESTJ codependency doesn’t always seem like the worst thing, especially when they are committed to someone and what they have together.

ISFJs really do want to feel connected to their loved ones and because of this they might be more inclined towards codependent behaviors. They care about feeling bonded to people and want these relationships to be something that they hold as valuable. They can be drawn to codependency because they want to feel truly connected to someone and don’t really enjoy feeling distant or like they aren’t really part of their lives.

ISTPs don’t really like the idea of having to depend on someone else and so they are often less inclined towards codependency. ISTPs want to feel like like they have space and time to themselves. They don’t need to feel dependent on someone else, instead they want to feel free to make their own choices. Codependency is actually a bit more unnerving for the ISTP, because it makes them feel like they are obligated to someone.

ESTPs don’t want to feel like they have to depend on others, but the more insecure ESTP might be inclined towards codependency. When they are struggling to find comfort within then they need to find this with someone else. When this occurs the ESTP struggles to really feel capable of disconnected from this person, and they become rather dependent on this relationship. The more confident ESTP is often the opposite, wanting to feel free to make their own choices and live life on their own terms.

ISFPs do strive for closeness, but at the same time they are highly independent people. They can certainly develop codependent tendencies when they grow up close to a certain person. The more insecure ISFPs is going to be inclined towards this, because they look to these people for comfort and reassurance. They might have a hard time building themselves up and so they want someone who is capable of doing this for them.

ESFPs often appear rather independent on the outside, and in some ways they certainly are. But this doesn’t mean ESFPs aren’t inclined towards codependent traits sometimes. When they want to feel connected to someone, they have times when they might depend on them for things. ESFPs might start to develop codependent relationships with people, since they have areas where they might lack the ability to pick up the slack and want someone who is capable of doing this.