How You Feel About Being Rushed, Based on Your Personality Type 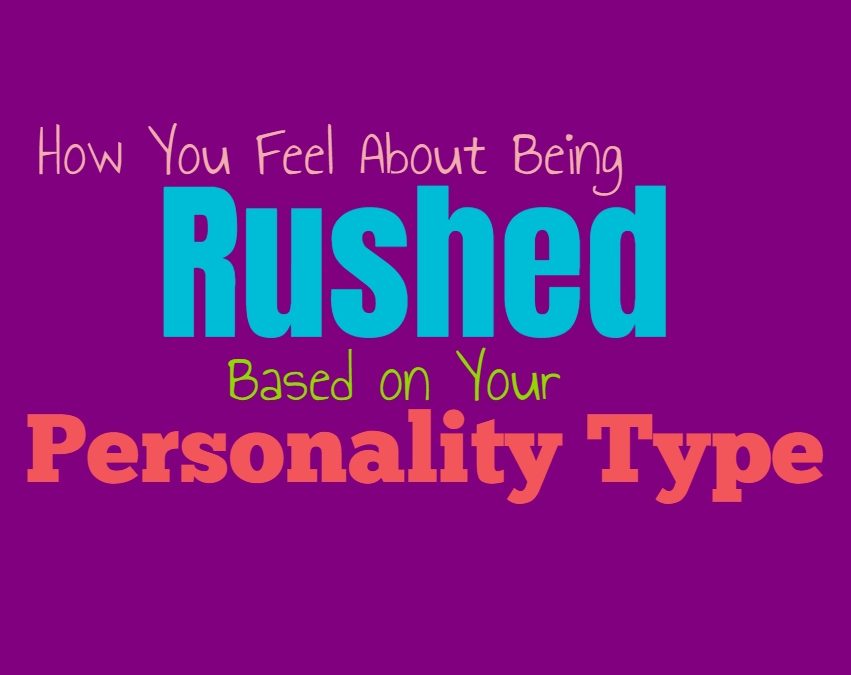 How You Feel About Being Rushed, Based on Your Personality Type

Some people can handle the stress of being rushed a bit, while others either cave under the pressure or being very frustrated by it. While no one is a fan of being rushed by others, we each have our own way of responding to it. Here is how you cope with being rushed, based on your personality type.

INFJs really don’t handle being rushed well, since they are likely already stressing to get things done themselves. When someone rushes them it can heap more pressure on their shoulders and leave them feeling overwhelmed. INFJs need to deal with things at their own pace, especially since they have a lot going on inside of their minds. When someone applies this type of pressure it leaves them feeling like they aren’t doing a good enough job and it is definitely not conducive to efficiency.

ENFJs definitely don’t appreciate being rushed, mostly because they are already rushing themselves. For the ENFJ this becomes like an overwhelming stress that they really don’t need. They will certainly respond by pushing themselves even harder to get things done, but if they are taking their time it is often for a good reason. ENFJs are focused and often efficient people and so they don’t need someone trying to rush them in most situations. They will sometimes feel like they need to prove themselves when this happens, but at the same time it isn’t necessary pressure.

INFPs are not ones to respond well to being rushed, and might lose motivation completely when it happens. They don’t really appreciate feeling pressured from people, and can turn this inward in a negative way. For the INFP it becomes more stressful than helpful when they feel like they are being rushed, especially since they often need to work at their own pace. For the INFP being overwhelmed with this makes them want to give up sometimes, or walk away from this situation and the person trying to push them.

ENFPs really don’t appreciate being rushed, especially since they need to work with some sort of space. Feeling like someone is rushing the ENFP can sometimes cause their rebellious nature to emerge. They will find themselves wanting to take their time or ignore that person completely, since they don’t like feeling controlled or bossed around. Even when it is someone they care for all this does is cause them stress, and doesn’t usually inspire the ENFP to move any faster.

INTJs can sometimes take being rushed as a challenge and will push themselves to get things done even faster. But for the most part INTJs are already processing things at a quick speed and work hard to be efficient. If they aren’t moving as fast with something it because they know it is necessary to move a little slower in order to be thorough and accurate. INTJs rarely need someone else to push them or motivate them with their speed, so they can become a bit miffed when someone tries to.

ENTJs are already efficient and often fast paced people, so having someone rush them can actually be a bit annoying. In some situations it causes the ENTJ to move even faster though, since they want to show this person just how strong-willed they are. They do take on challenges with a sense of power and drive, and want to really be seen as impressive people. At the same time they can become annoyed if someone is rushing them to do something when they know they are moving as fast as reasonably possible.

INTPs don’t really appreciate feeling rushed and might lose motivation when this happens. They already put a lot of pressure on themselves and when someone attempts to make this worse they sometimes feel a bit disillusioned with the situation. While INTPs do sometimes need help with motivation, that doesn’t mean rushing them is going to do this. When they feel rushed it creates a sense of stress and causes them to overthink the situation.

ENTPs are sometimes rebellious people, and when someone attempts to rush them it often brings this out. When they feel the pressure to move quicker they sometimes want to move a bit slower, just to prove that they can. ENTPs simply don’t like being controlled and so being rushed is not going to inspire them to move any faster. They appreciate logic, and so if someone explains how and why they can move a bit quicker, they will be more inclined to respond to this.

ISTJs are efficient and driven people and so there is rarely any need to rush them. If they are being rushed in the workplace they will attempt to push themselves harder though. ISTJs don’t want to feel like they are failing and so they often find ways to constantly improve. Their strong work ethic does assist them in moving forward, but at the same time ISTJs really don’t need to feel this sense of being rushed in order to get things done.

ESTJs are hardworking people and if they are being rushed they can respond differently depending on the situation. If their superior in the workplace is rushing them, the ESTJ will do their best to move quicker. They want to be impressive at their job, but at the same time they are likely already moving as fast as they can. If they realize that this person is really just being rude, they might challenge them a bit or find a way to go above their heads.

ISFJs are hardworking people who strive to be the best at whatever they do. This desire to be somewhat perfect, can cause the ISFJ to already be a bit hard on themselves. When someone rushes them, the ISFJ can feel a bit insecure about this and might try to compensate. This is something that usually isn’t fair to them, since they are already doing their best and trying hard to please others. Their need to please can cause the ISFJ to overexert themselves, especially when being rushed.

ESFJs do have a strong need to please, and so sometimes they push themselves even harder when they are being rushed. They often feel overwhelmed when this happens, and want to do whatever they can to make up for it. ESFJs might reach a point where they snap on someone who is rushing them, especially if they are already feeling the pressure to get something done. They don’t like this type of added stress, and can actually be surprisingly feisty when need be.

ISTPs rarely respond to being rushed by wanting to move faster, and might actually do the opposite. They are efficient in the workplace, but at the same they don’t often need someone to push them. ISTPs try to take these situations in stride, and just allow themselves to focus on getting things done their own way. They often have a pace in which they do things and need to be given room to take care of it their own way.

ESTPs can sometimes feel overwhelmed when they are rushed but they will respond differently depending on who is rushing them. ESTPs want to please certain people and so they might push themselves even harder to get the task done quickly. In some situations though they will find themselves becoming short-tempered with the person who pushes them when they are already stressing themselves about it.

ISFPs rarely respond to being rushed by wanting to move faster. They simply don’t work this, and often need space to get things done on their own terms. ISFPs are often unique people who like to explore things their own way and don’t really appreciate feeling controlled by others. If someone seeks to control the ISFP it is natural for them to challenge this, and seek out the opposite of what this person desires from them.

ESFPs don’t appreciate being rushed and rarely does it inspire them to move faster. They can sometimes be hot-headed people, seeking their own path in life. ESFPs don’t really care much for being pushed in a certain direction, and sometimes they can rebel against this type of person. For the ESFP it is best to give them space to get things done their own way, or to find more subtle ways to inspire them to move quickly.