INFJ Leadership: How the INFJ Handles Managing Others 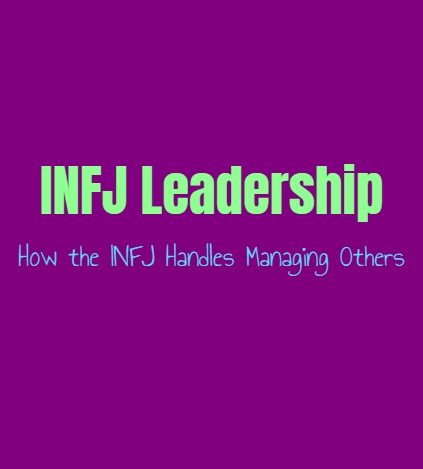 INFJ Leadership: How the INFJ Handles Managing Others

INFJs are not often considered to be leaders, but that is a bit of a misconception. They can be seen as the quiet dreamers, the ones who keep to themselves and don’t like being in the spotlight. While this is true, there are many other layers to the INFJ personality which makes them far more complex than just this. They are capable of so many things which often surprises those around them, and causes the INFJ to be great at rising to the occasion. When they are in situations where they need to adapt and learn how to become better at something, INFJs are incredibly skilled at this. This is something which makes them good at fitting into roles which might not appear to be right for them from an outside view.

INFJs are naturally in tune with the emotions and needs of others, which is a skill that can be very useful in leadership roles. While most INFJs might not choose or desire these positions, they can actually be quite good at them. They can often tell when someone needs more instruction, or when that person does need to be put in their place. At the same time INFJs know when someone just needs a little space to get something done, and so they realize when they shouldn’t be micromanaging. They can read the emotions of those around them very well, which makes them excellent at knowing when to push harder and when to back off. This is a natural ability which helps the INFJ understand the people around them, and work well as their leader. This is why so many leadership roles actually are filled by INFJs, people just don’t necessarily recognize this. The INFJ can charm the group, and coerce them in a certain direction without being harsh or demanding. They do this in a rather subtle manner which makes the process much smoother, and people feel more willing to cooperate. People don’t feel like they are being controlled by the INFJ, instead they feel understood and appreciated by them as leaders.

While INFJs are good in these roles, it can also take a toll on them at times. Constantly having to focus on keeping things organized and interacting with people, can be a bit draining. INFJs do love being around people and want to connect with them, but at the same time they are introverts who need a lot of time to themselves. They might not get enough of this time to themselves that they so desperately need, especially when they are in leadership roles where they need to constantly be interacting with those around them. INFJs also don’t normally enjoy having to command those around them and be someone who instructs them in a certain direction. This can be a complicated role for the INFJ, since there are both rewarded and sometimes exhausted by it. For the INFJ the leadership role is often something they are pushed into or have to take on because no one is filling this position. INFJs will do so out of responsibility and caring, but at the same time it isn’t necessarily something they would aspire to in a normal circumstance.

There are however, some INFJs who see themselves as leaders and will use their natural charm and wit as a means of getting there. This can sometimes be for good reasons, while for the less healthy INFJ it might be a desire for self-confidence and control. They might use this as a means of reassuring themselves, and building on their own sense of arrogance. For the healthy INFJs this is an entirely different story, they often want to fill these roles in order to make a difference in the world. Most INFJs feel this innate need to become something or really help the world and make an impact. This desire to do something greater than themselves, can be a major reason for the INFJ to want to find leadership roles to fill.

INFJs are not necessarily comfortable being followers, at least not in a blind manner. They might challenge authority and feel uneasy just listening to what someone says because they are in charge. The INFJ wants to use their own minds in order to make choices and come to conclusions about what they should do. When someone in a leadership role is commanding and ordering those around them, the INFJ instinctively wants to question this. They want to at least be sure this person should be listened to, before deciding to blindly follow their instructions. This can cause the INFJ to appear unruly at times, especially as children. They are independent thinkers who don’t feel they should be forced to follow someone who does not have their best interests at heart. INFJs become especially frustrated with leaders who they believe to be immoral and untrustworthy. When they get a strong sense that this person is not caring or sincere, the INFJ becomes almost angry at the injustice of the situation. Being forced to follow a leader who is not real and honest, is not something the INFJ is happy accepting with a smile. This is something which can cause the INFJ to feel rather forlorn with the state of the world, and is often why they choose to distance themselves.