INFP Leadership: How the INFP Handles Managing Others 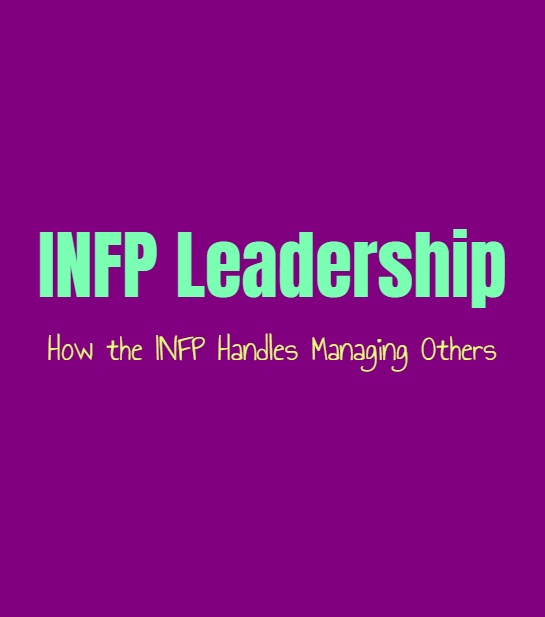 INFP Leadership: How the INFP Handles Managing Others

For the INFP leadership roles can be a bit stressful, they often have their own way of looking at things which might not fit into these positions. INFPs are often independent people who like to be on their own, or with a small group of loved ones. They might even be the type of people who challenge authority and leaders, especially ones they do not trust or believe have an accurate moral compass. While most INFPs might shy away from leadership positions, that doesn’t necessarily mean they are incapable of filling these roles if the situation calls for. It is often far more complex than a simple “yes” or “no” answer, especially when it comes to personality types who have a tendency to walk their own complex paths in life.

As leaders the INFP is often supportive and helpful and wants to encourage their team to work together and remain positive. INFPs are definitely good at motivating people to believe in themselves, and to feel a sense of comfort in their presence. INFPs don’t want to push people too hard, and often have different means of helping them get things done. Instead they try to give people a sense of inner confidence, showing them that they can believe in themselves to achieve their goals. When the INFP is in a leadership position they want to give people space to be themselves without a sense of judgement. Sometimes this can actually work quite well, often depending on the environment. With the right group of people the INFP leader can actually excel. So long as they have people who enjoy their tender way of approaching things, the INFP can really bring people together and make for a pleasant experience. The INFP would rather be in a leadership role where they are free to encourage people, and don’t have to command them or force them to remain organized. Creative environments are much better for them, especially if there are people who can handle the organization without needing someone to force their hand.

Where INFPs struggle is when they are in an environment which requires schedules and stricter guidelines. They don’t want to be the enforcer, and become rather drained and unhappy in these positions. INFPs don’t feel comfortable demanding that people follow the rules, and when they have to be strict with people it becomes rather tiresome. These positions aren’t ones which feel natural for the INFP, and they might find themselves struggling to fit in comfortably. INFPs don’t want to feel like they are bossing people around or forcing them to behave a certain way. If they need to adhere to strict rules and deadlines, the INFP won’t enjoy the role of leader and might not be capable of really living up to it. While INFPs possess many talents and skills, keeping organized isn’t really one of them. They prefer freedom and space, and so being someone who has to enforce these rules doesn’t make much sense for the INFP. While they might want to try and be the best they can at this role, it is something which likely exhausts the INFP. They just aren’t made for giving orders and ensuring that each person is following them correctly. While INFPs can be supportive and helpful bosses, being someone who has to step up and be the strict leader really isn’t for them. INFPs are much more laid back people who want to give others space to be themselves, which doesn’t include commanding them to follow their rules.

While INFPs might not be the best at leading, they also aren’t fans of following in most cases. INFPs are likely to challenge authority, especially when it seems wrong and doesn’t make sense. INFPs are more than capable of falling in line and respecting the rules, but only if they make sense and seem like the right thing to do. When the rules are fair and the leaders appear to be sincere, then the INFP is perfectly capable of listening and following their instructions. They don’t mind doing what someone requests of them, they just don’t want to do this blindly and without paying attention to their actions. INFPs are moral people, and these inner morals are very important to them. For the INFP it would be wrong to simply do what someone says because they are told they must. Instead they want to follow their hearts and do what they believe to be the right and good thing.

While INFPs might not loving being leaders in most situations, they also aren’t ones to blindly follow. For the INFP it is important to follow their own hearts and morals, which makes them more inclined to walk their own path in life. They care about connecting with others but also can be very independent people. They want to be able to do what feels right to them, and go after their dreams without having people standing in their way.