INTJ Leadership: How the INTJ Handles Managing Others 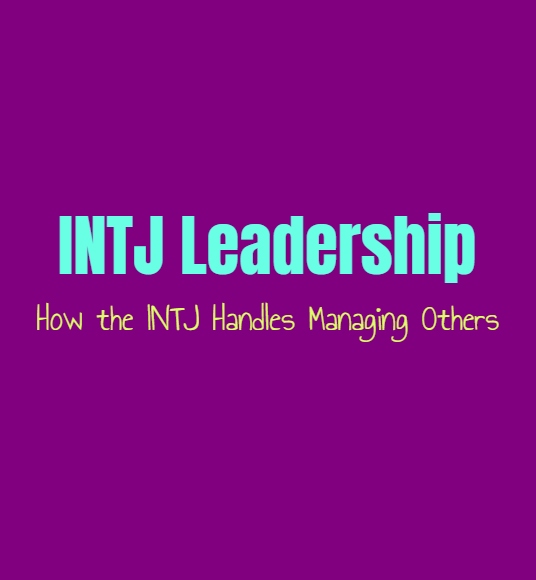 INTJ Leadership: How the INTJ Handles Managing Others

INTJs are often viewed as natural leaders, since they aren’t afraid of taking control. For the INTJ being in leadership roles is often more comfortable than being someone who follows others. For the INTJ being someone who can get things done on their own terms is important, but sometimes they have to work with a team. Being the leader is often more comfortable for the INTJ than having to follow someone else’s lead. INTJs are focused and hardworking people, and they will do whatever it takes to accomplish their goals and get the job done.

While INTJs might not always choose the role of leader, it is often something they are skilled at. They know how to dictate and make their desires and focus known, especially when they are trying to lead a team. INTJs can step up into this role without fear, and instead focus on logic and reason. Their ability to strategize is something which helps the INTJ get things done and navigate being able to lead others in the right direction. For the INTJ it is about seeing the problems and knowing how to solve them without allowing emotions to stand in the way. They can delegate to those around them and give them clear instructions on what they need to be doing. INTJs might not be sensitive or emotional with their leadership style, but they are direct and very precise with it. The fact that they aren’t in tune with the emotions of others can be a challenge at times, since their team might feel like the INTJ is a bit harsh. Ultimately, this doesn’t stand in the way of their ability to lead, since they will still do what it takes to ensure everything is finished perfectly. INTJs might be hard on others, but they are even harder on themselves and believing pushing to reach success with all of their goals. They might not always be well-liked as a leader, but they will be respected and trusted.

INTJs are often naturals as leaders, but they do become a bit exhausted with it sometimes. They become drained with constant social interaction and being in a leadership role does often put them in social settings. INTJs will do their best to try and focus on what needs to be done and not allow themselves to getting dragged into anything which might create too many social interactions. For the INTJ it is important to take on things which are challenging for them, and so they will do their best to always rise to the occasion. For them being a leader is about ensuring that their team reaches their goals with a sense of efficiency and pride. They will focus on strategizing and coming up with plans which will help things run smoothly and competently. INTJs will certainly take on these roles when they have to, but they might prefer something which allows them more space and independence. Having to tend to others and make sure they are doing things right, can be draining for them after a while. It can be a complicated situation for the INTJ, they want to climb their career ladder but also don’t necessarily enjoy working with others all of the time.

INTJs are not always comfortable having to follow the instructions of someone else, especially someone they don’t respect. If the INTJ is working under someone who doesn’t appear competent or efficient, they will become extremely frustrated. They might even have a hard time biting their tongue, especially when they feel this person is doing things incorrectly. INTJs believe in being direct and honest, and value efficiency above most things when they are working on something important. This can cause them to challenge their “leaders” or bosses, especially when they can see clearly how they aren’t operating the best way possible. This can cause tension for the INTJ sometimes, which is why following isn’t always their greatest strength.

INTJs can however, take instruction very well and enjoy being able to learn. When the person leading them is intelligent and efficient, this will change the INTJs outlook entirely. They value being able to learn from this individual and want to work with them to get the job done. INTJs just don’t like working with or under people who aren’t smart enough to really handle the job proficiently. Because of this the INTJ often does better working independently and with plenty of freedom to do their own thing. They often do best being a business owner, especially if they can have people under them who handle working with people and allow the INTJ room to focus on other things. They are capable of working with others, they are just happier having plenty of room to do things on their own without constantly having to answer to those around them.