INTP Leadership: How the INTP Handles Managing Others 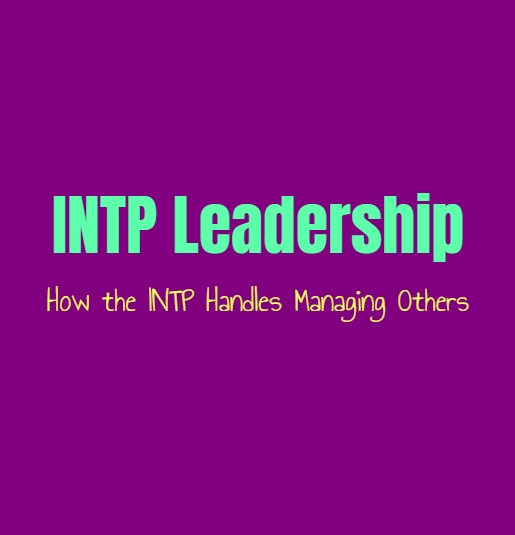 INTP Leadership: How the INTP Handles Managing Others

INTPs aren’t often seen as leaders, since they don’t really like being in these types of positions. For the INTP it is often more comfortable to be independent and have their own space from people and so having to lead and instruct can seem rather exhausting. Not everyone desires a leadership role, but that doesn’t mean they are incapable of handling these positions. Being good at something and actually enjoying are certainly different things. Just because the INTP doesn’t necessarily want to be leader, doesn’t mean they don’t possess certain traits and natural strengths which can help them excel at it.

INTPs don’t usually feel comfortable in leadership roles and tend to avoid these positions when asked. They prefer to be independent and have their own space, and so having to dictate to others can be rather draining. INTPs become truly exhausted with too much social interaction, especially if they have to constantly worry about the needs and desires of those around them. Being a leader often means having to assist others and pay attention to their actions and even their emotions sometimes. For the INTP this can feel truly exhausting and isn’t something they are likely to search out. Having to deal with giving out instructions and orders can be challenging for INTPs, even if they know the best choices and path to make. They are strategic people and can often analyze a situation in order to find the best choices and the right plan to put together. INTPs definitely know how to strategize and their abilities to analyze make them great at figuring out how people can succeed. The struggle for them is commanding others, since they really don’t like feeling like they have to tell people what to do. If the INTP does have people who are receptive then they can certainly instruct them and explain the best ways of getting things done.

INTPs really need time to themselves and often prefer to work more independently. They don’t like feeling tied down to situations and so being a leader can feel a bit overwhelming. While INTPs might enjoy the strategic and logical aspect of leading a team, they don’t necessarily enjoy the social part of it as much. Having to instruct others and constantly ensure that they are doing things correctly, can become rather frustrating. INTPs don’t want to have to be bossy or demanding and really dislike micromanaging people. For the INTP it is much more rewarding to have freedom and space to get things done on their own terms. Because of this they might prefer to have distance when they are trying to accomplish something, and so constantly being asked questions can be draining.

INTPs really don’t feel comfortable as followers, as they don’t like blindly doing what people instruct them to. They are much more independent people, and want space to make their own choices. For them it is often better to have space and freedom, which is why INTPs do work well alone rather than in groups. They can certainly collaborate with people and do their best to work in a team, especially if these people are good at being logical and understanding the INTPs plans. They definitely believe in working hard to figure out the best way to work with people when they have to, but they can become a bit drained by it. For INTPs it can often be best to have more freedom in the workplace, so they can utilize their sense of creativity. While they might not want to lead, they don’t like following someone without being sure they can trust in their instructions. INTPs don’t like being bossed around and can often challenge authority when they don’t believe the person leading is capable of doing a good job. This causes the INTP to struggle in some situations, especially where they are being asked to follow orders from someone they don’t really respect. If this “leader” or boss doesn’t really give the right instructions and seems inefficient, the INTP will become very frustrated with them.

INTPs can follow instruction from someone who is highly intelligent and capable, but they also do better with someone who can think outside of the box. When the INTP is told to do things in a manner which is too direct and stiff, they become exhausted and frustrated. They do better with leaders who are willing to hear what they have to say and take their suggestions. INTPs have so many ideas inside of their minds and they want to be heard, if they feel like their boss or leader is listening then they can really be responsive to this. INTPs can be either leaders or followers in the right circumstances, but they are more comfortable working on their own and having plenty of independence to get things done.