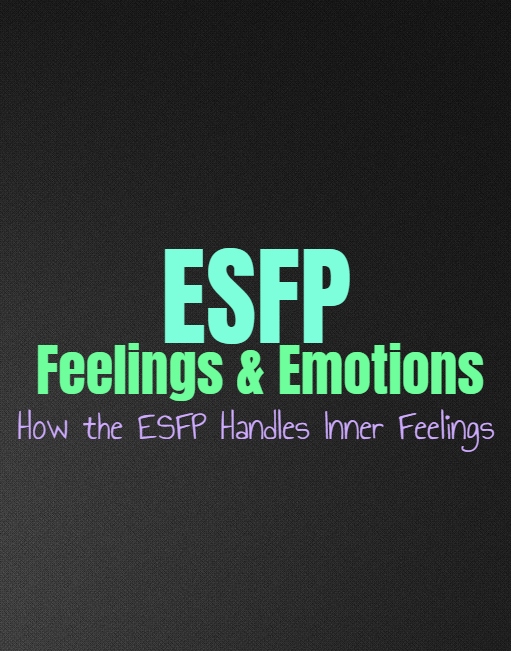 For some personality types their inner feelings are deeply important and something they prioritize. While everyone experiences emotions and feelings, well all do this differently. For the ESFP their emotions are very personal and something they feel should be a priority in their lives. While for some other types emotions should not rule their choices, the ESFP don’t share this same belief. They feel it is important to follow their hearts, and so their emotions and feelings are something to be valued and listened to.

ESFPs follow their hearts and their inner emotions, instead of following what others expect of them. This is why they can sometimes be seen as rebellious, but in truth they just want to follow their own path. When the ESFP desires something or feels drawn in a certain direction, instead of hesitating they find it best to just follow this feeling. For the ESFP going against their inner feelings and emotions, is one of the worst most stifling things. They want to be free to follow their desires and the inspiration that comes from the world around them. If the ESFPs feels like someone is trying to hold them back they will have a hard time with this, since they need this space to make their own choices.

ESFPs truly believe in going after their dreams and follow their hearts inner desires. They don’t want to feel like they are being obligated to do something, especially if they don’t feel inspired by this. They need to be capable of chasing their dreams and living in the present moment no matter what others want for them. They require this type of openness in their lives, since ESFPs are independent people. They don’t like feeling as if they have to adhere to the rules and expectations of others, since they want to remain true to themselves. They have strong inner morals and beliefs, and they want to allow these values to be their guide in life. When the ESFP feels inspired by something they want to let these feelings guide them, instead of allowing fear to prevent them from following the right path. While others might see this as reckless, the ESFP just wants to feel inspired and excited about their lives and their choices.

For the ESFP emotions are not something to be ignored, and instead they are deeply important. For some following facts and logic is what matters, but to the ESFP this is far too cold and impersonal. They want to follow their inner emotions but also want to listen to the feelings of those around them. When someone is upset the ESFP wants to be there for them, to listen and provide a sense of understanding. They don’t simply want to prevent someone from feeling a certain way, instead they are often capable of accepting those emotions for what they are. While some people seek to change the feelings of others in order to make the situations seem nicer, ESFPs are often capable of realizing that those feelings are valid and don’t need to be stopped or changed.

For them emotions are a truly important part of life and not something which should be ignored. ESFPs don’t like feeling as if they need to push their feelings aside, or bury them so that they don’t upset someone else. When they are in a situation where they feel like they have to hide their feelings, it is likely to make the ESFP extremely unhappy. They need some sort of openness in order to be themselves and feel a sense of confidence. ESFPs don’t need every choice to make sense to those around them, for them it is about living in the present and experiencing life to the fullest. This doesn’t always result in some sort of logical methods of behaving, but the ESFP needs to follow these feelings or else they don’t feel sure of themselves and their choices.

It Makes Them Sincere

The fact that ESFPs follow their emotions actually makes them more sincere people. They don’t like being dishonest or hiding things from people, instead they want to be truthful. ESFPs care about their sense of inner morals, and almost always these morals tell them to be honest with those around them. They don’t want to be someone who has to hide or pretend, and feel truly immoral if they are in situations where they are pushed to do this. The fact that emotions are so vital to the ESFP, is actually what makes them such sincere people.

The fact that ESFPs follow their heart does not make them the flighty people that others peg them as. Instead this makes them true to themselves and their beliefs, not wanting to do anything which goes against what they feel is morally sound. ESFPs also care deeply about their loved ones, and these feelings are something they prioritize above all else. The fact that emotions are important to the ESFP, makes it so that the feelings of love are vital in their lives. When they care for someone it means everything to the ESFP, and they will often go above and beyond for this person. What people don’t realize is that their emotions make the ESFP brave and strong, not flighty and weak. These stereotypes are so far from true when it comes to the ESFP, since they are often rather courageous and moral people.