What Your Natural Communication Skills Are Like, Based On Your Personality Type 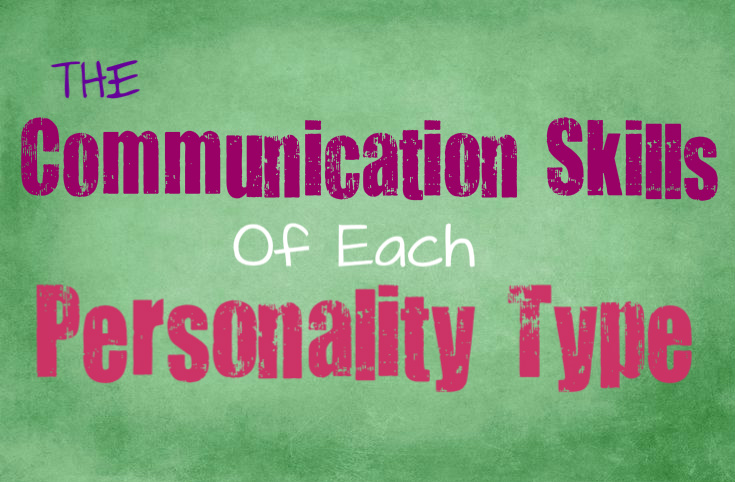 What Your Natural Communication Skills Are Like, Based On Your Personality Type

Communication is an important part of creating lasting relationships, and is something that impacts our lives greatly. Here is how well each personality type can handle communicating with others.

INFJs are usually excellent at communication, especially when they are doing this through writing rather than verbally. INFJs can often end up being the mediator between two people, since they are skilled at finding ways to bridge the gap of communication. They can often see where people are misunderstanding one another, and find out a simpler way to help them understand. INFJs are not always the most chatty people, but what they do communicate is very well thought out. They like to take a step back and process things sometimes, which can make their written communication much better than verbal. When they are given time to think things through, they will have plenty to say.

ENFJs have excellent natural communication skills, and can often persuade people to agree with them. ENFJs are very skilled communicators and are usually very aware of the intentions of others. They can gauge a situation in order to figure out what should or should not be said at that moment. ENFJs ability to read the emotions of others, makes them great at navigating any conversation. They are naturally great therapists, because they are good at mediating different misunderstandings. Their ability to figure out what people are trying to say, makes ENFJs amazing at helping people understand one another.

INFPs are rather unique and complex individuals, and their communication styles reflect this. They are great at empathizing with the emotions of others, and will often be good at connecting with people because of this. They are rather understanding people, which makes them incredible listeners. They often communicate to others in an emotional way, but they are capable of translating this well. INFPs do however need plenty of alone time, and might appear distant towards others when they need to retreat. Their need for time to themselves makes INFPs excellent at communicating through written word. Certain things that they struggle to express verbally, can often be written out easily.

ENFPs are extremely charismatic individuals, with a knack for earning the trust of others. They know how to be completely sincere, and help others to open up. Many people find themselves sharing personal information with ENFPs before they even know them that well. There is something about their nature that allows others to trust them completely. ENFPs are good at communicating what they want to people, and are also incredible listeners. ENFPs are naturally fun people to be around, and are often energized by conversation about various topics. Their way with words often causes ENFPs to have a diverse circle of friends, who all enjoy communicating with them.

When an INTJ is openly communicating with someone, their words often appear to be well thought out and concise. They are intelligent people, who are constantly striving to make sense of the world around them. INTJs words are often very intentional, making them good at asserting themselves in certain situations. INTJs definitely despise small talk, but they understand how to easily converse with people. They might not always enjoy making conversation, and will often find ways to avoid speaking to people they do not like. INTJs are good at making their intentions known, but are not great with emotional communication. As long as the discussion is not centered around feelings, then INTJs are skilled at communicating clearly with others.

ENTJs are outgoing and charismatic people, with a knack for communication. They are often very good at speaking in a business sense, and are comfortable making their presence known. ENTJs are rarely afraid to communicate their intentions, and will find themselves at ease with just about anyone. ENTJs are not the most emotional people, and might become uneasy if the conversation takes a turn towards feelings. ENTJs are excellent at understanding people, as well as making themselves clear to just about anyone- as long as emotions are not involved too much.

INTPs are precise and logical people, making their communication style appear cold most of the time. They simply do not outwardly express emotions, and can become awkward during conversations that are centered around feelings. INTPs are much better at writing out their thoughts than they are at verbally expressing them. When they are forced to communicate verbally, they might take long pauses in order to fully express what they are thinking. INTPs have very rich inner minds, where their thoughts are constantly running through new and powerful ideas. The way that they think is often difficult for them to fully explain to others, making their communication skills somewhat different than other peoples.

ENTPs are often very charismatic and fun people to talk to. They enjoy throwing around new ideas and absolutely love having debates with people. ENTPs have very little filter, and often openly express their thoughts to others without holding much back. ENTPs are often very sure of themselves and are willing to express this verbally to others. They can sometimes come across as very sure of themselves, which can be overwhelming for some people. ENTPs do best when they are speaking to other intellectually driven people, because it allows their conversation to go in a more desirable direction.

ISFJs are often very supportive towards others and this translates into their communication style. ISFJs try to be caring and warm towards others and are good at expressing this verbally. They often attempt to understand others, and will try hard to make sure they know exactly what everyone needs. ISFJs can struggle to communicate with people who do not express themselves well, because they do not like to pry or force others. ISFJs work hard to communicate themselves clearly, wanting to always be warm and supportive towards others.

ESFJs are often skilled at communicating, and will often be the mediators of many conversations. They are good at seeing how people are misunderstanding one another, and will do their best to help them come together in clarity. ESFJs are good at convincing others to share in their opinion, which makes them great at commanding a room. They are often the people who can bring an entire group of people together, becoming the glue that holds them in place. ESFJs can sometimes struggle to communicate if emotions are too strong involved, since they care very much about the feelings of others. Their ability to read others, can sometimes cause frustrations because they are reading into things deeper than people are prepared for.

ISTJs often come across as very formal when they are communicating to people they are not extremely close with. They know how to smoothly express themselves to others, which makes them great in a workplace. ISTJs understand social norms very well, and they often utilize this knowledge to communicate gracefully with others. They are not the most open people when it comes to their personal lives, but they are good at keeping parts of themselves separated without making people uncomfortable. The are not the most emotional people, and so their communication often appears firm and precise.

ESTJs are very outgoing people and are often very good at communicating with others. They are skilled at giving orders, and are natural leaders. They are skilled at giving instructions to others, and this is definitely where their natural abilities are. ESTJs can be somewhat demanding towards others, since they value efficiency and desire to get things done. People can find their communication style a bit harsh, and might become easily offended by the ESTJ. They are naturally aggressive communicators, but also have charismatic personalities that allow them to get away with a lot.

ISTPs are direct with their communication and are skilled at getting their point across when they want to. ISTPs are very charismatic individuals, who are easily liked by most people. They are often good at understanding other peoples intentions, and will be able to make themselves very clear with how they communicate. ISTPs are not entirely skilled at expressing their emotions though, and may struggle to communicate their feelings towards others.

ESTPs are naturally charismatic individuals, with a knack for persuading others with their words. The are good at flattering people and often know just the right words to say. They are very openly verbal people and are comfortable speaking their mind without hesitation. ESTPs are intelligent people, who rarely struggle to communicate with others. They can often express themselves very clearly and are good at understanding and connecting with many different types of people.

During communication ISFPs are extremely supportive and are often excellent listeners. They are good at understanding the emotions of others, and often communicate through a wide spectrum of emotions. ISFPs can sometimes jump from one thing to another rather quickly, but it is entirely focused on emotions which is why it seems to move around quickly. ISFPs are warm and compassionate people, which makes communicating with them rather comfortable for most people. They might have a difficult time with overly logical or theoretical conversations, and prefer to focus on more open and emotion centered topics.

ESFPs are often very easy people to communicate with, as long as the topics are carefree and fun. They might become frustrated if people attempt to dive into depressing or theoretical topics. ESFPs are caring and open people, and will often get into long discussions with complete strangers. The are charismatic and enjoy making everything fun and exciting. The might have a hard time understanding people who are too different from them though, and communication might deteriorate.