How You Would Behave Stranded on a Desert Island, Based on Your Personality Type 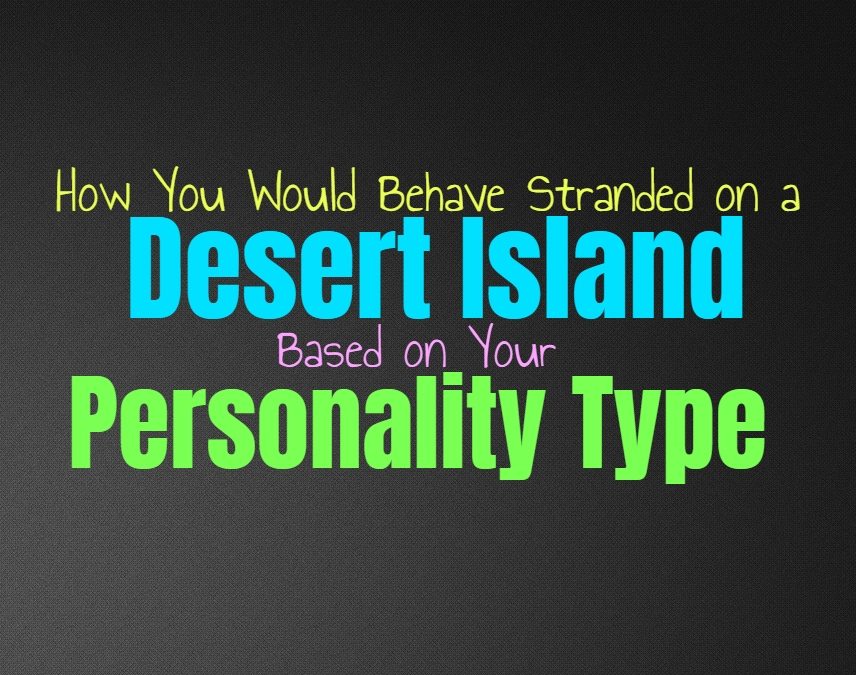 How You Would Behave Stranded on a Desert Island, Based on Your Personality Type

We’ve all thought about it, mostly those of us who have watched Cast Away. Every person imagines what they might be like if they were stranded on an island somewhere, having to survive and handle finding a way to home. Here is how we think you would behave if you were stranded on a desert island, based on your personality type (obviously just for fun).

INFJs would be skeptical person, especially if they were stranded along with others. They are often the voice of reason, telling people when they are clearly making major mistakes which could cause them harm. They would be trying to see the best way to make a life on this island, and wouldn’t necessarily see it as the worst thing possible. They might find it a bit intriguing to think of being away from civilization, without all of the hustle of the world around them. The biggest struggle for the INFJ would be figuring out the survival skills, and so they wouldn’t be afraid to look to people and pool the information everyone has.

ENFJs would be the person trying to get everyone organized, finding the right job for every person. They would take on most of the work themselves, but they would want to make sure everyone was working properly as a team. They would be the mediator wanting to ensure that the other people on the island weren’t fighting or causing any trouble. ENFJs are natural leaders, and they wouldn’t be afraid of stepping up in order to help everyone come together. They wouldn’t want to force themselves into this role, but they would want to find ways to make others feel cared for.

INFPs would be the moral compass on the island, the person trying to ensure that everyone did the right thing. Where some people would be pushy and selfish, the INFP would try to remind them how horrible those choices are. They would try to make sure everyone remained true to themselves and don’t start becoming negative or harmful. They would be highly in tune with which people they didn’t want to trust, especially the ones who started making those frightening and selfish comments.

ENFPs would be the enthusiastic one, jumping on different tasks and ways to take over and master the island. They would try to remain positive and do their best to keep everyone around them from becoming too grim. ENFPs would be the person knowing when to have a little party by the fire, even though everyone else would be feeling uptight and overwhelmed. They would try to make the most out of this situation, instead of allowing the negativity to bring them down and leave them feeling gloomy.

The INTJ would be instantly skeptical of everyone around them, especially if they aren’t with people they trust. They would likely want to find a way to split off, not wanting to be around a group of people who could make the situation worse for them. The INTJ would instantly start problem solving, wanting to find solutions and ways to keep themselves taken care of, as well as their loved ones. INTJs might be stressed about the situation, missing their technology and cell service, but they would do their best to focus on the situation and find ways to solve whatever problems might arise.

ENTJs would likely take on the role of leadership as quickly as possible, their minds going straight to getting things done and setting up jobs for everyone. They wouldn’t want to waste time moping or trying to cope with the situation, they would simply want to jump into surviving and doing things right. ENTJs would likely bump heads with anyone else who tried to play the role of leader, simply because they don’t feel comfortable following orders from most people.

INTPs would like find themselves retreating a bit, wanting to process everything going on around them. They might be the quiet one, sitting away from everyone else, trying to figure out who they could actually trust and who they couldn’t. They might be perceived as odd, or possibly the strong silent type. They would want to find ways to problem solve, but might need someone to help them navigate all of their thoughts into actions. They would work well with the right person, someone who can keep their ideas reigned in a bit.

ENTPs would be the person who would be a bit too eager, wanting to tackle all of the different chores at once. They might be excited to use their skills and knowledge in order to help carve out a life in this new place. ENTPs might be the ones acting weirdly excited to take on this challenge, wanting to find ways to get things done and come up with unique ideas to help them create better ways of living on the island. This excitement might wear away after a while, but they would still continue coming up with new ways to improve things.

ISTJs would likely be quietly absorbing everything, wanting to come up with ways to problem solve immediately. They would use whatever knowledge they have to try and get things done, but might be the ones doing things off on their own. They would likely feel a bit uneasy being around others in this type of situation, and would only want to be around the people they trust and love. They might see anyone else as a threat to their survival, and so being around a group would be unnerving for the ISTJ.

ESTJs would like want to take on the role of leadership, struggling to really hear out anyone else’s commands. If someone else tried to be the leader of the situation, the ESTJ would likely have a hard time handling this. They would want to find a way to get things done, but wouldn’t want to follow anyone they did not trust. ESTJs are better as leaders and might be seen as a bit bossy in a situation like this.

ISFJs would likely be the quiet ones, waiting for someone to give them suggestions on how they could help. They would want to be around their loved ones, constantly seeing if they felt cared for and comfortable. The ISFJ would be the worrying ones of the situation, feeling internally panicked about how they could take care of their loved ones. ISFJs care about others and they want to make sure they are happy, being in a situation where their well-being is in danger, would be deeply troubling for the ISFJ.

ESFJs would likely jump right into wanting to make sure their loved ones were properly cared for. If they were on the island with other people they might become worried about caring for the people close to them first. ESFJs can be naturally protective people and it is important for them to be able to provide for the people close to them and keep them from any kind of harm. They would be worried, but would try their best to keep everything positive and prevent things from becoming heated in the environment.

The ISTP would likely be the one trying to problem solve, and eagerly jumping into this new environment. It might feel a bit exciting at first, like some sort of new challenge they could tackle. ISTPs are adventurous people and so it wouldn’t be surprising for them to have some knowledge about survival skills and finding ways to adapt to these situations. The ISTP would likely be the strong silent one, giving off this confident air of mystery.

ESTPs are often naturally adventurous people who enjoy diving into new experiences. They might be eager about the challenge at first, but they also might be anxious after some time passes. The biggest struggle would be feeling trapped, since ESTPs need to feel open to new things and free to change their minds. They would do their best to take this as an adventure and work to bring the group together in order to get things done and survive the situation.

ESFPs are adventurous people and so their minds would go straight to find ways to survive. The ESFP might be the one seeking out ways the make the most out of the situation, possible wanting to seek out games and ways to actually enjoy themselves when the sun went down. While they would be capable of getting things done, they would want to actually live instead of just surviving in this type of situation.