Are You Good at Preparing for the Unexpected, Based on Your Personality Type 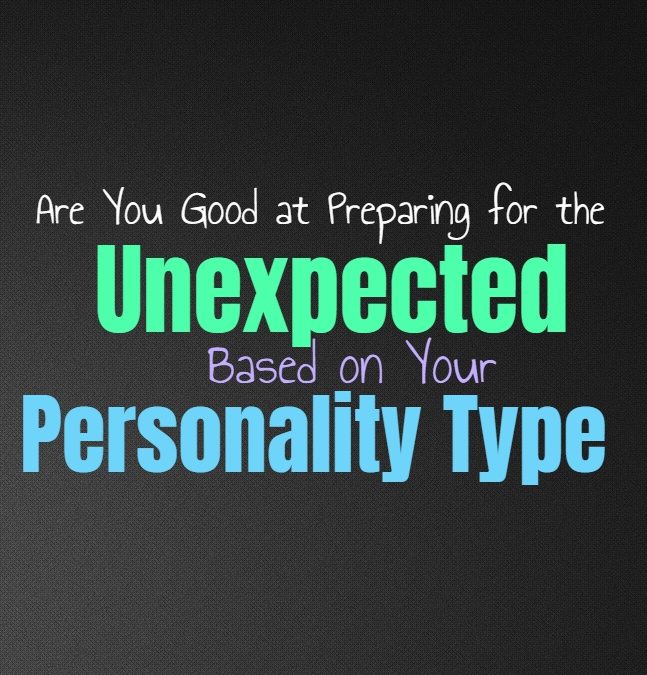 Are You Good at Preparing for the Unexpected, Based on Your Personality Type

Some people have a knack for preparing for the unexpected and getting ready for when things don’t go as they initially desire. They want to be sure they are ready when things don’t really go as they expect, and are good at navigating these situations without becoming too stressed. Here is how good you are at preparing for the unexpected or the unknown, based on your personality type.

INFJs do like to be prepared for things and don’t really want to take chances that something might get messed up. They are good at mentally and emotionally preparing themselves for the future, but not entirely the unexpected. This is because INFJs are often prepared for most things themselves, since they have strong intuitive abilities. They have a knack for understanding things and being able to pick up information which gives them a sense of what will likely happen. Without this awareness the INFJ can become anxious, not wanting to deal with the unexpected situations.

ENFJs do like to be prepared for things, but they don’t like when something pops up that is unexpected. They try to emotionally stabilize themselves for when the unexpected things do happen, wanting to be capable of navigating these issues. For the ENFJ it is difficult to really cope when something doesn’t go as they plan, but they do juggle many things at once and want to be able to handle this with a sense of poise. They might not enjoy unexpected things but they try to prepare themselves for when their plans don’t really go as they hope.

INFPs don’t really need to prepare themselves for unexpected things, since they prefer to go with the flow. They don’t want to get all caught up on being prepared for anything, instead they just let themselves experience it. INFPs realize not everything can go the way they plan and that sometimes unexpected things will come their way. Sometimes these new things can be thrilling and leave them wanting to explore the changes.

ENFPs don’t really need to prepare for the unexpected, but they can often handle it fairly well. They don’t need everything in their lives to be planned out and scheduled, and can often handle when things go a different way than they might have thought. ENFPs want to be capable of handling these changes and unexpected situations without falling apart. They often want to take advantage of the change and hopefully learn something new from it.

ENTJs do want to be capable of preparing themselves for just about any given situation. They realize that sometimes things won’t go as expected, and so they want to be able to get ahead of this. For the ENTJ it is important to be capable of responding to new situations and so they want to be able to prepare for the unexpected and realize that it is going to happen. ENTJs are good at adjusting and finding ways to solve problems which might arise.

INTPs realize that they can’t fully prepare themselves for everything which happens, and need to be capable of adapting. They are often capable of adjusting when things don’t go as expected and want to be able to cope with this accordingly. INTPs do like thinking through scenarios in their minds so that they might be capable of navigating these unexpected situations. INTPs can often adapt and try to problem solve with these unexpected situations.

ENTPs realize that sometimes things are going to happen unexpectedly, and that they cannot prepare for everything. They do enjoy thinking through different scenarios in hopes of figuring out which maths they should take. For the ENTP this is about seeing if they can predict the outcomes by utilizing their sense of logic and intuition. When things don’t turn out as expected they simply want to use their minds to navigate these new situations and problem solve to get through them.

ISTJs don’t like dealing with unexpected things, and so this can be a struggle for them. They prefer when they can prepare for things, and want to be able to think it through to get ready. When something unexpected happens this can be frustrating and stressful for the ISTJ. They don’t necessarily know how to prepare themselves for these situations, since they try their best to hold onto plans and keep things organized.

ESTJs don’t really know how to prepare themselves for what happens when things don’t go as expected. This is because ESTJs prefer to be capable of navigating things and really planning for the future. They want to be able to really get themselves ready for different options and potential outcomes, and so when the unexpected happens this can really stress them out. They will do their best to cope with this and prepare, but it can be difficult.

ISFJs don’t really know how to handle the unexpected, although they try their best to avoid it entirely. Instead ISFJs want to be capable of avoiding these unexpected situations by ensuring that they have contingency plans for when things go wrong. They would rather make things happen according to plan and do their best to avoid unexpected situations. When they do arise the ISFJ can become rather stressed about them and might feel overwhelmed.

ESFJs really don’t like unexpected situations and so they might not be fully prepared for them. They do their best to plan ahead and ensure that they can get things done properly. When something unexpected happens it can really leave the ESFJ feeling anxious and on edge. They might feel overwhelmed and stressed when this happens, and so they really want to be capable of preparing for the situation and ensuring they can solve it.

ISTPs don’t really need to prepare themselves for the unexpected, and often enjoy letting things happen. They live in the present and want to be capable of navigating changes without snapping. ISTPs know that they can bounce around and try to experience new situations, without feeling worried about the outcome. For them it is more thrilling to dive right in and see what comes out of these challenges.
ESTP

ESTPs enjoy experiencing new things and want to be able to bounce into these situations with a sense of excitement. For the ESTP not everything needs to be prepared for, and so they are open to the unexpected. For them it can be thrilling to have something change, since this provides them with a challenge and potentially something new to dive into.

ISFPs don’t like preparing for the unexpected since they realize things don’t always go as they might want. They like to dive into these experiences without letting things hold them back. They realize that the unexpected is going to come their way, and they want to just live in the moment and enjoy the things as they come at them.

ESFPs don’t need to prepare for the unexpected, since they would rather just live in the present. ESFPs know that life isn’t always going to go as planned, and so they just want to enjoy the moment as it comes at them. They want to seek out joy and allow themselves to experience things with a sense of excitement and enthusiasm.