ENFP Loyalty: What Being Loyal Means to the ENFP 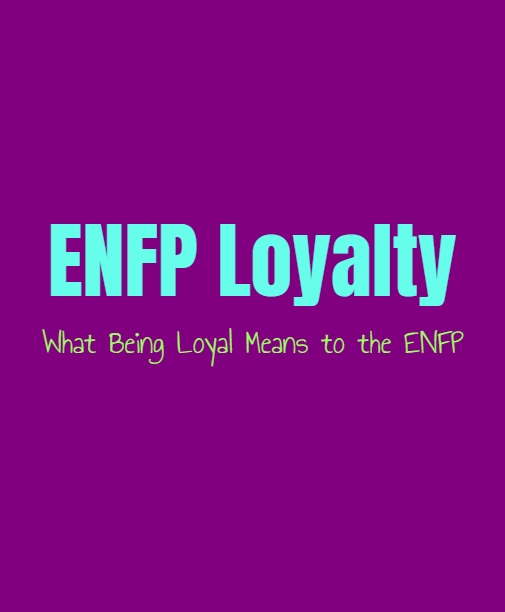 ENFP Loyalty: What Being Loyal Means to the ENFP

For the ENFP loyalty is definitely something they value deeply. They have strong inner morals and this is something which affects who they are and the choices they make. The ENFP holds onto these morals as a means of guiding them through life, which is why a sense of loyalty is often attached to this. They do their best to be someone who their loved ones can depend on, and they also value this coming from the people in their lives. People often misjudge the ENFP, labelling them as not valuing loyalty simply because they are curious people who enjoy exploring different options and paths.

What Loyalty Means to the ENFP

When the ENFP connects with someone they believe in giving their whole heart to them. They don’t get into things halfway, and so when they care for someone they want to completely dive in. ENFPs struggle to step back or take things slow when they really care for someone, especially when it comes to romantic relationships. For them loyalty is something which comes naturally when they care about someone so deeply. For the ENFP being loyal means standing by this person and always being there for them no matter what. The ENFP doesn’t believe in turning their back on someone when they love them and are loyal to them. Loyalty means that they will stand behind their loved ones, even when other people are judging them for their actions. They don’t focus on what the outside world thinks, instead they are focused on what their loved one needs from them.

ENFPs see loyalty as promising to never give up on someone or leave them, even when it gets hard. For them it might not mean that things are always perfect or that they can always provide what that person needs, but they won’t walk away even when things are hard. For the ENFP one of the most important parts of being loyal is really just promising to be with someone and not walk away. While for some it might require much more than this, for the ENFP it is about holding on to this promise. When they commit to someone and promise to be loyal to them, they really want to be loyal to them and hold onto this.

When it comes to romantic relationships ENFPs often believe in loyalty as being faithful to them as well. While people might label them as incapable of fidelity, this is actually very far from the truth. While ENFPs might take a while to commit to someone and make that choice to be with them, once they do it is something they take seriously. When they love someone and recognize that they want to be with them the ENFP will do whatever it takes to make this work. They don’t find it challenging to be faithful once they have found the right person, and actually believe this is a vital part to being loyal to them. They don’t want to accept anything less from the person they are with as well, and believe it is important that they don’t betray this trust. ENFPs don’t have overly high standards in relationships, but they do want someone who will be loyal to them through everything. The ENFP might have times when they don’t feel their best, but they want people who don’t betray them just because they are struggling. They give their hearts to the people they love, and really don’t believe in doing anything halfway. This is why loyalty is actually very important to them, since they want to be able to stand by the people they love with a sense of purpose and passion.

When the ENFP feels betrayed it is really difficult for them to let go of this. They do have a tendency to hold a grudge and moving on from this hurt is really challenging. They might want to find a way to forgive someone when they have betrayed them, but it just isn’t easy for the ENFP. They remember even the slightest betrayals, or even just when someone has said something hurtful to the ENFP. They don’t intend to hold onto these feelings, it just isn’t easy for them to really remove this from their hearts and minds. This is why the ENFP values loyalty so much and it is really hard for them to let go when they feel like someone has betrayed this sense of loyalty. For the ENFP it is important to hold onto those values, especially when it comes to more serious transgressions. While they can forgive smaller mistakes, that doesn’t mean they really ever forget them. The ENFP will likely bring these betrayals up in later arguments, almost like they catalog all of these things in their minds without even meaning to.